The image below is the last in a series I’ve made using both an original World War One postcard and a photograph I took in Verdun. All are works in progress. 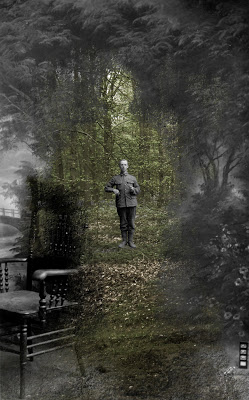 I’ve been fascinated with the backdrops in some of these postcards for quite some time now and have been looking at ways of using them in works relating to the Great War and, in particular, the issue of empathy.

The original postcard is of course in black and white (with a greenish tint) and shows a soldier about to head to the Front, standing, leaning on a chair. 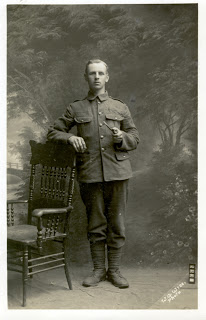 Behind him is an idealised image – an idyllic, invented landscape, a far cry from what he was, perhaps, about to encounter, but close in some respects to what we find on battlefields today; where there were trenches, arms, barbed wire and bodies, there are now trees. And amidst the trees, incongruous concrete Pill Boxes stand and watch as the seasons come and go. Everything is slowly reclaimed. The trees in the image at the top of the blog spill to reclaim the past – the interior of the studio – through the gap left by the missing soldier.

I have placed the solider back beyond the gap left by the vague shape of his own body, to remind us that people like the soldiers we see in all these postcards, were once like those of us who have visited the battlefields. They too would have known what it was to stand in a wood. To listen to the wind blowing through the branches.

To stand and do just that, is one way to remember them.