“OVADA presents Residue: the results of three artists’ residencies. Catherine Charnock, Nicholas Hedges and Tom Milnes are all emerging artists who were chosen from open submission. Here they present a dynamic collection of work in a diverse range of media, including painting, sculpture and sound. The work in the exhibition has been developed and created during the residency period of five weeks. This period of time was provided for research, and its results are not all finished works, but therefore give viewers a fascinating insight into the processes of making contemporary art. In addition, during the residency period, interesting dialogues have emerged between the three artists’ work. 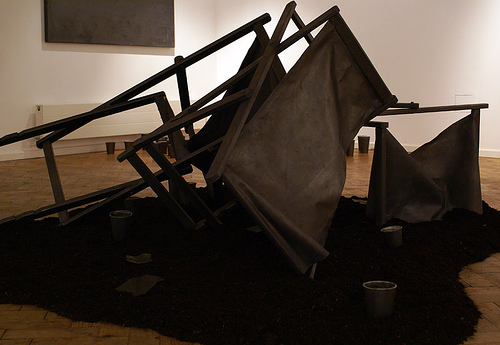 Recent graduate Tom Milnes encourages audience interaction with his multi-media works. These works are the result of process-led research, often using found objects and recorded sound and exploring their potential through hands-on experimentation. In multi-media interactive installations, Milnes demonstrates visual ways of displaying sound and sound technology. During his time in residence at the gallery, Milnes has been developing a new work that fuses sound and sculpture together, and tests the physical properties of the materials he uses.

Milnes’ concerns with sound and space concur with Nicholas Hedges’ background in art and music. Hedges’ work is concerned both with place and in particular memory, both individual and collective. How do we as individuals access the memory of a place (a city, a building, a forest) and in turn, the lives of those who came before us? What is our relationship with these people and vice-versa? Visiting places which have witnessed terrible traumas such as Auschwitz and Ypres, Nicholas has used a variety of media to examine these and related questions.

While Hedges works are monuments to the serious, sombre aspects of our collective past, Catherine Charnock works with oil on canvas and charcoal on paper to create works exploring imagery of toys – in particular, toy soldiers. She is interested in the way that these become appropriated into our domestic environments, and draws and paints these environments in ways that they appear to be both familiar and alien. As a result, these seemingly safe spaces reveal a latent potential for violence. Her images also explore scale; tiny figures are depicted in huge drawings, where they fight among dead flowers that give away their real proportions. These fantastical creations and imaginary scenes are both sinister and playful, exposing Charnock’s fascination with the uncanny as manifested in the everyday. Like Milnes and Hedges, she takes commonplace objects and transforms them into something more thought-provoking, and highlights for us their disarming and poignant qualities.”