In the Tenth Elegy of Rilke’s Duino Elegies we read:

‘…Our ancestors
worked the mines, up there in the mountain range.
Among men, sometimes you still find polished lumps
of original grief or – erupted from an ancient volcano –
a petrified clinker of rage. Yes. That came
from up there. Once we were rich in such things…’

And gently she guides him through the vast
Keening landscape, shows him temple columns,
ruins of castles from which the Keening princes
Once wisely governed the land. She shows him
the towering trees of tears, the fields of melancholy
in bloom (the living know this only in gentle leaf).
And she shows him grazing herds of mourning
and sometimes a startled bird draws far off
and scrawls flatly across their upturned gaze
and flies an image of its solitary cry….

Dizzied still by his early death, the youth’s eyes
can hardly grasp it. But her gaze frightens
an owl from the crown’s brim so it brushes
slow strokes downwards on the cheek – the one
with the fullest curve – and faintly,
in death’s newly sharpened sense of hearing,
as on a double and unfolded page,
it sketches for him the indescribable outline.

I’ve read this poem numerous times but on a recent reading, the first and last two lines reminded me of some sketches I made during a visit to Hafodyrynys, a town in Wales where my grandmother was born. My great-grandfather, Elias, used to walk from their house, up ‘the mountain’ as my grandmother called it, to Llanhilleth where he worked in the mine. Following in his footsteps, and walking the path he walked almost every day over 100 years ago, I thought of how the shape of the view had barely changed. I sketched it: an indescribable outline on a double and unfolded page. 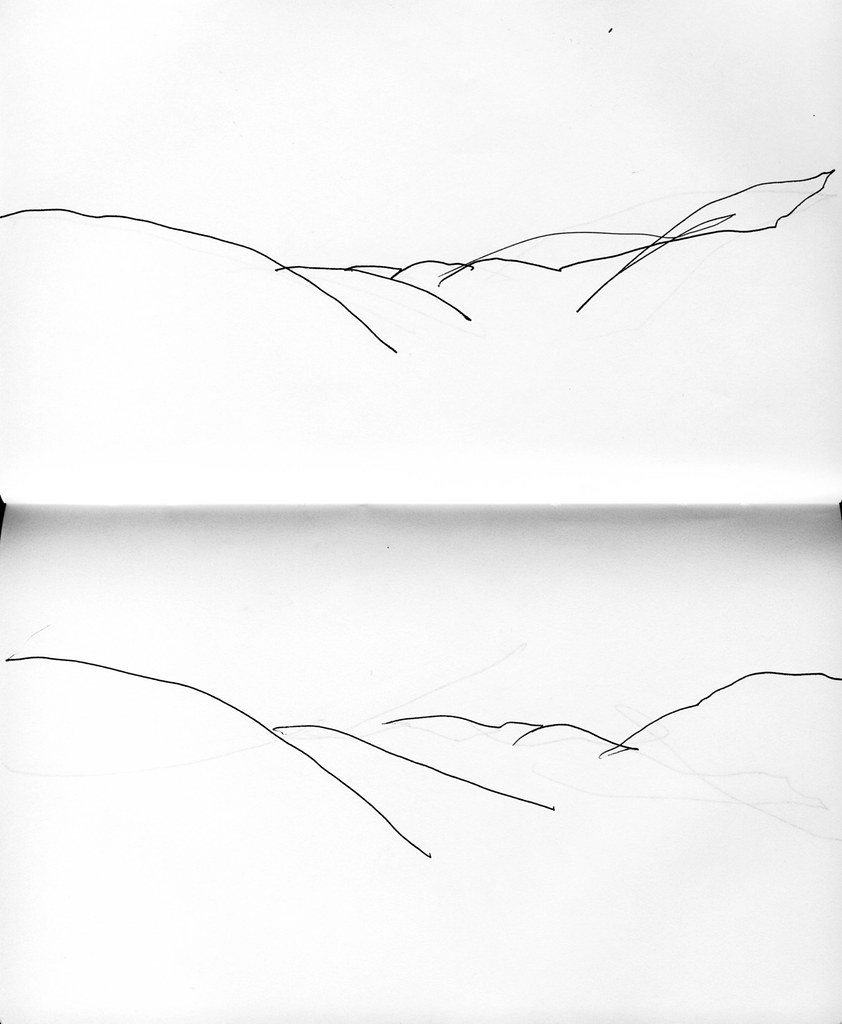 Something indescribable is – of course – a thing which defies (or at least seems to defy) description. In my work that ‘thing’ is the ‘nowness’ of a past event. Indeed, if I was to describe what I attempt to do in my work, I would say ‘to walk in the landscape of the past as it is now’.
As a means towards this, I attempt to capture the nowness of the present through single gestures (like the sketches) or a few written words, creating lists of short observations as I walk:

A young boy in a flat cap pulled over his face
A bell tolls
A girl on her computer sits at the window looking out
Blue, yellow and white balloons
Two distant blasts of a train horn made bigger by the stillness of the air
The cackle of a bird

With regards gesture: Rilke said that the “depth of time” was revealed more in human gestures than in archaeological remains or fossilised organisms. The gesture is a “fossil of movement”; it is, at the same time, the very mark of the fleeting present and of desire in which our future is formed.

The concept of a ‘depth of time’ leads me to consider the phrase ‘a distant past’. How can the past be distant (or otherwise) if the past no longer exists? How can we measure that which we cannot empirically observe? My getting up this morning is as much a part of the past as, for example, the death of Richard III, yet of course there is a difference; a scale of pastness. But how can we measure pastness? We can of course use degrees of time, seconds through to years and millennia, but somehow it seems inadequate. For me, pastness can also be expressed through absence (in particular that of people) and it is this absence which the trees express so silently, so eloquently. “William Wordsworth, writing in his Guide to the District of the Lakes, wrote that we can only imagine ‘the primeval woods shedding and renewing their leaves with no human eye to notice or human heart to regret or welcome the change.'”

‘Look,’ says Rilke, ‘trees exist.
The houses we live in continue to stand. Only we
pass away like air traded for air and everything
conspires to maintain silence about us, perhaps
half out of shame, half out of unspeakable hope.’

Rilke’s description of the Keening landscape reminded me too of the landscapes which I created as a child (see also Maps). These were ‘places’ based on how I perceived the landscape of the past; in particular, its swathes of ancient and unspoiled forests. As Richard Hayman puts it: “woods are poised between reality and imagination…” Whenever I was in a wood – however small – I always experienced it with my imagination.

Which brings me round to recent work I’ve been doing on World War I backdrops.

Seeing the young soldier standing before a bucolic backdrop, one is reminded of the youth in Rilke’s poem being led through the Keening landscape. 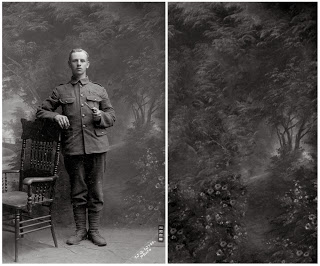 For some time, I’ve been wanting to create landscapes based on these postcards, landscapes about the Great War which do not seek to illustrate its horrors but articulate our present day relationship to it. A quote by Paul Fussell is important in this respect:

The landscape behind the soldier becomes the Keening landscape described by Rilke, a moment of pastoral as described by Fussell. In the right hand image, the soldier has gone; the landscape is one filled with ‘the towering trees of tears, the fields of melancholy.’ It is an image of the past: as Ruskin wrote: a tree “is always telling us about the past, never about the future.” It is an image of absence, a kind of which only the trees can speak.