Below is a typical, early 20th century studio portrait. The subject – a boy – sits on a prop. Behind him hangs a backdrop on which is painted an idealised scene – something like the view of a country estate with trees, balcony and lake.

When I first got the photo (as part of a job-lot of old photographs) I gave it a cursory look and that was that. I hardly noticed the backdrop behind, which is perhaps the point. 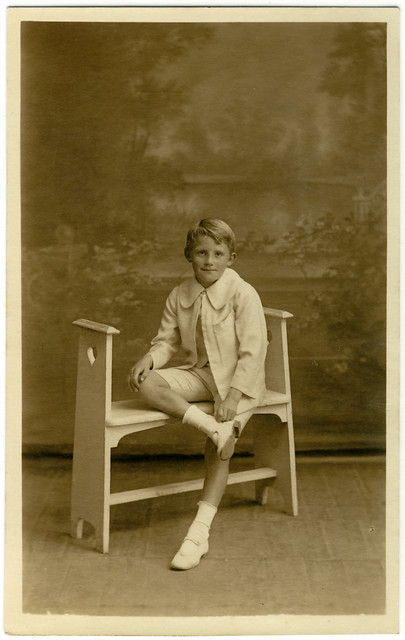 The image below is another studio portrait from around the same time. The subject rests upon a prop – in this case a chair. Behind him hangs a backdrop – a bucolic scene replete with woodland path, flowers, river and bridge – and again, when I first looked at the photograph – given to me as part of a collection of around 200 – I hardly noticed the backdrop; my eyes were drawn only to the soldier. But as I began analysing the backdrops of other postcards in the collection, becoming more aware of the differences between studio-based portraits, and those taken in more informal, often domestic settings, I started to think more about these backdrops. 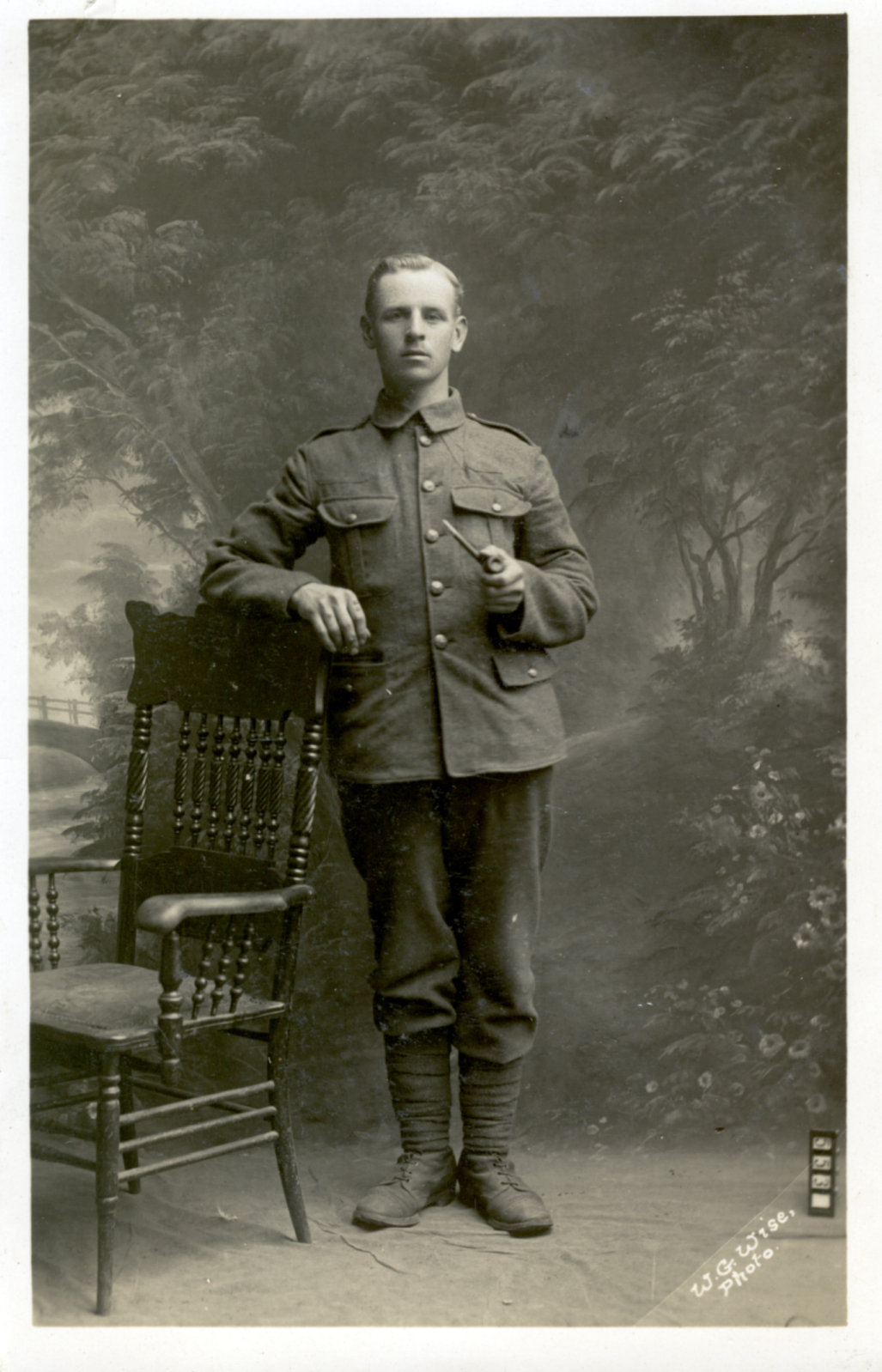 The photograph is of course that of a soldier bound for the Front in the Great War of 1914-18, and it is this context which makes the backdrop interesting. In the picture of the boy above, the backdrop – when considered a little more deeply – becomes an aspirational image; that of the boy’s idealised future: the image’s inherent sense of distance perhaps adding to this idea. Which is probably what makes the backdrop in the image of the soldier so provocative. For many of those bound for the battlefields of Ypres and The Somme, the future had cast distance aside and charged headlong towards them, dragging with it, that erstwhile companion of their old age – death.
It is strange to think that this image of the soldier, clutching his pipe, his arm resting on the wooden chair, might be all that remains of this man. An insignificant moment in front of the camera is all that’s left to tell of a whole life lived.
Death of course is the ultimate distance. As Sir Thomas Browne wrote:

“We whose generations are ordained in this setting part of time, are providentially taken off from such imaginations. And being necessitated to eye the remaining particle of futurity, are naturally constituted unto thoughts of the next world, and cannot excusably decline the consideration of that duration, which maketh Pyramids pillars of snow, and all that’s past a moment.” 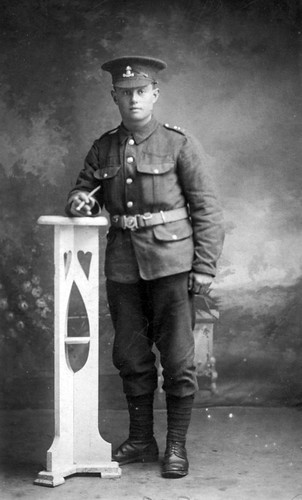 That click of the camera, that moment, would, when pressed against the face of eternity, encompass all that has so far come and gone since the Universe began. It’s a concept quite impossible for the human mind to hold and so – in some – the void is filled with God and an afterlife. After the war, many of the bereaved tried to fill the void left in their lives through Spiritualism, attempting to contact their loved ones in an eternity filled perhaps with pre-war, picture-postcard landscapes; trees, fields, flowers, rivers and so on. And in many ways, the photographs of the soldiers above, become not images of insignificant moments made before their departure, but images of their place in an eternal moment once the war was done.

After the war, the sense of emptiness must have been everywhere. Every insignificant moment – barely acknowledged before the war – now pregnant with a pervasive sense of incomprehensible loss. The world was outwardly the same, shifted just a little, but it had taken the lives of millions to push it there.