Below are two portraits, each of a soldier about to leave home to fight in what we now know as the Great War.

I’m interested in these two particular pictures because they reveal how differences in their immediate surroundings affect out ability to empathise with them as individuals.

In the first picture, taken in a studio, the soldier is pictured in front of a painted backdrop. In this idealised landscape, the leaves of the trees are out,  the flowers are always in bloom, and behind an incongruous chair a river flows nowhere beneath a bridge. In the second picture the trees are bare, there are no flowers and a path leads to the rear of what appears to be a garden.

In the first picture, the soldier could almost be an actor standing on a stage. In the second, the soldier is – one assumes – at home, although in a sense, he too is playing a part. His however is a picture of departure; an image pregnant with the weight of all we know was about to befall him and thousands like him. The image of the soldier standing in the studio, tells me only about that time between the shutter’s opening and closing. There is no sense of an entrance or indeed an exit – whereas with the second image, one can imagine the soldier standing in place, then leaving once the picture was taken.

I can empathise with the second soldier much more readily because I know what it’s like to stand in a garden in winter. Somehow, the fact the trees are bare, along with the hedge running the length of the garden helps me make a connection. The branches and twigs are stark, vivid, real. With the first soldier, the backdrop is a fantasy and connecting with him is like trying to connect with someone else’s dream.

The main difference between the image above and those below is that in all those below I can feel the scene I’m looking at. I can almost hear it.

It was, I think, taken as the sun came up in the morning or as it set in the late afternoon… 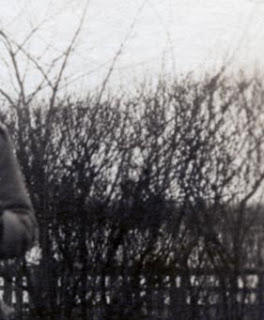 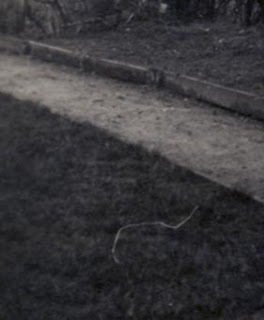 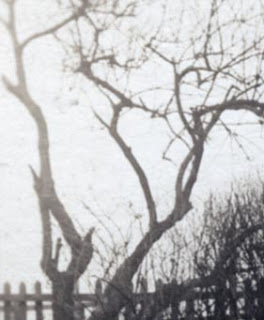 Looking at it, I’m reminded of a photograph from my own childhood (below), taken in the winter of 1984. 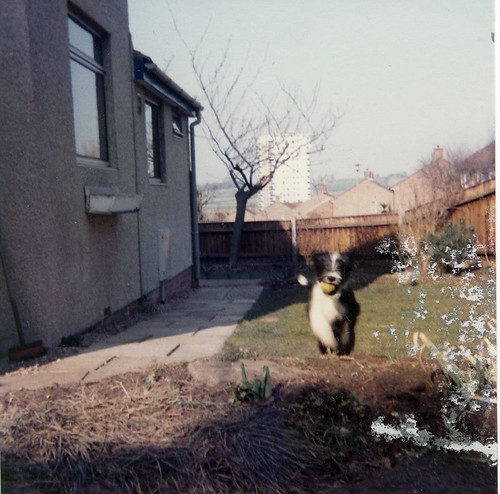 The bare cherry tree at the bottom of the garden echoes the tree in the one above (as does, in some respects, the path). I can clearly remember the dog (Sukey) and the places beyond the limits of the photograph; the image – and my memory – opens out like a flower.
The same is true in part of the image of the soldier standing in his own garden; his world opens out, not in terms of the surroundings beyond the limits of the picture (the gardens of his neighbours for example) but rather the history of the war about to be played out. I know what happened on an historical level, but now I can imagine this war from a different angle; from that of this small patch of ground in an undisclosed part of the UK; from the perspective of this particular soldier in the cold, milky light of a winter’s morning or afternoon.
I look at his image not only with my eyes but with my body – with an embodied imagination. I use my own memories to ‘colour in’ this image taken almost a hundred years ago, not in terms of green for grass, blue for sky etc. but in terms of the cold, the sharpness of the temperature. With the the soldier in the studio, there is very little to support any sense of an empathetic connection. His image is, a sense, just that – an image; one no different to the painted backdrop in front of which he stands.