It was through reading E.M. Forster’s lectures (collected in a book entitled ‘Aspects of the Novel’ and first published in 1927) delivered under the auspices of Trinity College, Cambridge, that I first came across a reference to Max Beerbohm’s satirical novel Zuleika Dobson. In particular it was a passage quoted by Forster as ‘this most exquisite of funeral palls… Has,” he goes on to say “not a passage like this a beauty unattainable by serious litertature?” The answer to that is in some respects yes and below is that very passage:

“Through the square, across the High Street and down Grove Street they passed. The Duke looked up at the tower of Merton… Strange that tonight it would still be standing there, in all its sober and solid beauty – still be gazing over the roofs and chimneys, at the tower of Magdalen, its rightful bride. Through untold centuries of the future it would stand thus, gaze thus. He winced. Oxford walls have a way of belittling us; and the Duke was loth to regard his doom as trivial.

Aye by all the minerals we are mocked. Vegetables, yearly deciduous are far more sympathetic. The lilac and laburnum making lovely now the railed pathway to Christ Church Meadow were all a-swaying and a-nodding to the Duke as he passed by – ‘Adieu, adieu your Grace,’ they were whispering. ‘We are very sorry for you – very sorry indeed. We never dared suppose you would predecease us. We think your death a very great tragedy. Adieu!”

The premise of the novel concerns the arrival into Oxford of the beautiful Zuleika Dobson, a woman of such beauty, any man who sees her cannot help but fall in love.

“To these Emperors, for whom none weeps, time will give no surcease. Surely, it is sign of some grace in them that they rejoiced not, this bright afternoon, in the evil that was to befall the city of their penance.” 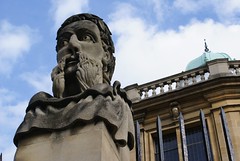 The problem is that Miss Dobson herself cannot love any man who loves her in return and so, having fallen in love with the brilliant Duke of Dorset, her love is immediately lost on hearing of his reciprocal feelings. Spurned, there is only one course of action left to the Duke and that is suicide by drowning in the Isis during Eights Week. But such is the esteem in which he’s held, and such is the love every undergraduate holds for Miss Dobson, that almost the entire undergraduate population of Oxford plunges into the river and is lost.

Taking the plaintive tones of the passage above and some other extracts of the novel, I assumed (not recalling the date of its first publication) that Beerbohm’s novel was something of an allegory about the lost generation of the First World War, of the lost innocence of Edwardian Oxford. However, the novel was first published in 1911, and as such, the book is not unlike the pair of black owls which perch on the battlements of the Duke’s ancestral home and foretell of his death.

“Young Oxford! Here, in this mass of boyish faces, all fused and obliterated, was the realisation of that phrase. Two or three thousands of human bodies, human souls? Yet the effect of them in the moonlight was as of one great passive monster.”

Just after reading the novel, I started reading again Peter Vansittart’s survey of the First World War, Voices From the Great War. Comprising quotes, poems, letters and so on, the book paints a picture of the war through the long lost contemporaneous voices. I first bought the book following a visit made to Ypres and turned to it again having received a gift of almost 200 postcards from the time of the Great War. 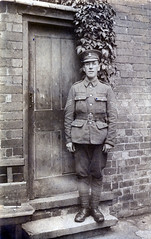 Taking the three together – Beerbohm’s novel, the postcards and the quotes – one begins to read the absurd fantasy of Zuleika Dobson in an altogether different way. We have all seen images of men cheerfully marching to the Front, waving their hats and shouting, and when one reads of the mass (almost cheerful) suicide of all the young men in the novel, one cannot help but compare.

“There was a confusion of shouts from the raft of screams from the roof. Many youths-all the youths there-cried ‘Zuleika!’ and leapt emulously headlong into the water. ‘Brave fellows!’ shouted the elder men, supposing rescue-work. The rain pelted, the thunder pealed. Here and there was a glimpse of a young head above water-for an instant only.
Shouts and screams now from the infected barges on either side. A score of fresh plunges. ‘Splendid fellows!'”

“The enormous expansion of wealth in the peaceful years between 1908 and 1914 brought not happiness but fear, and fear so powerful that it could be expressed only in images of fear and destruction. When war came, it was almost universally accepted as something foreseen and foretold. Even those who loathed the notion of it acquiesced in it as inevitable, and it is not foolish to conclude that what ultimately brought the war was not the ambitions and fears of Germany, but a death-wish in the peoples of Europe, a half-conscious desire to break away from their humdrum or horrifying circumstances to something more exciting or more exalted.” C.M. Bowra

“War might drive a man till he dropped: it could be a dangerous and bloody business; we believed, however, that it still offered movement, colour, adventure, and drama. Later, when the murderous, idiotic machinery of the Western Front was grinding away, of course all was different.” J.B. Priestly

Of course it was different – the reality of the situation. And having turned the last few pages of Beerbohm’s novel, I wondered what it would have looked like, all those dead young men lying prone in the waters of the Isis.