As shown in a previous blog, this is a picture of my grandparents’ garden in Headington, Oxford, taken sometime in the mid 1970s. 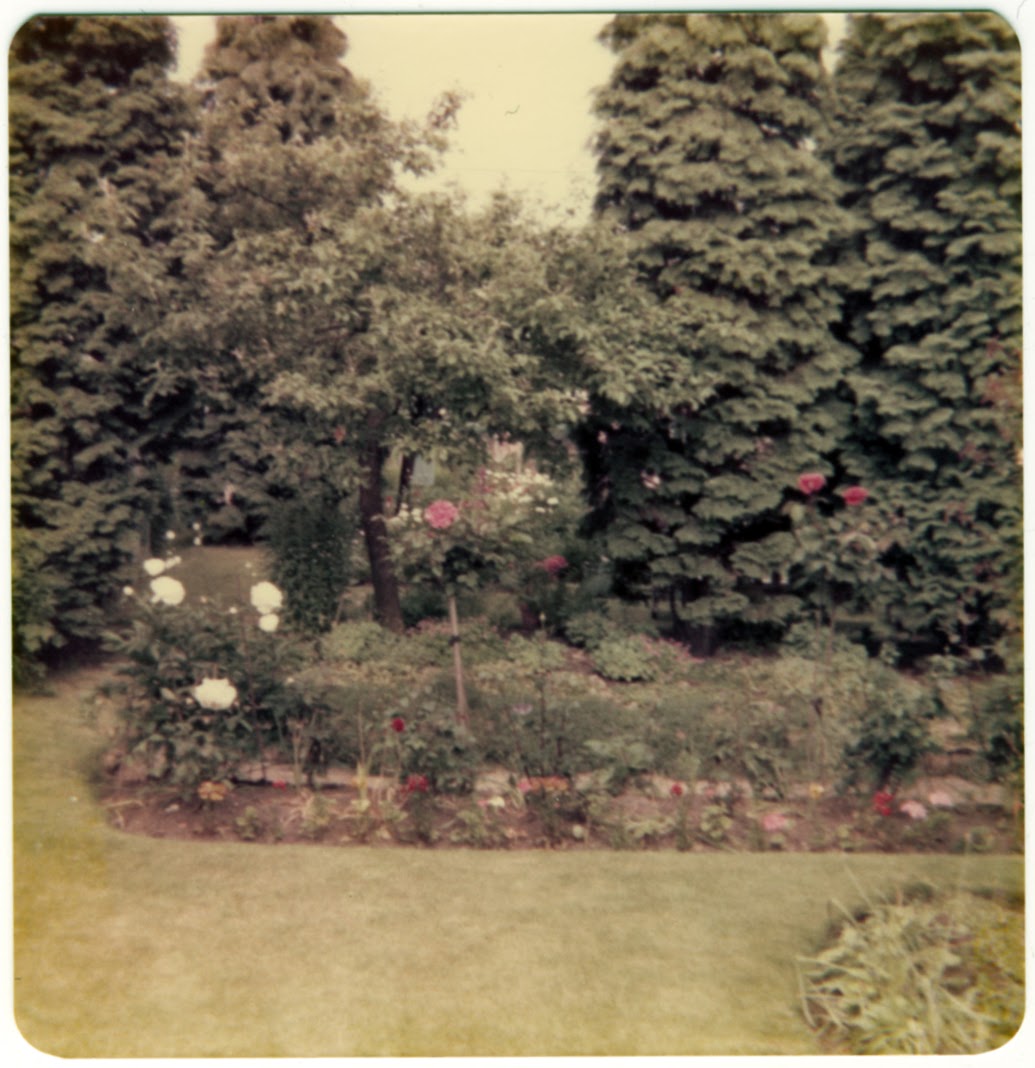 This was, growing up, a very special place for me… 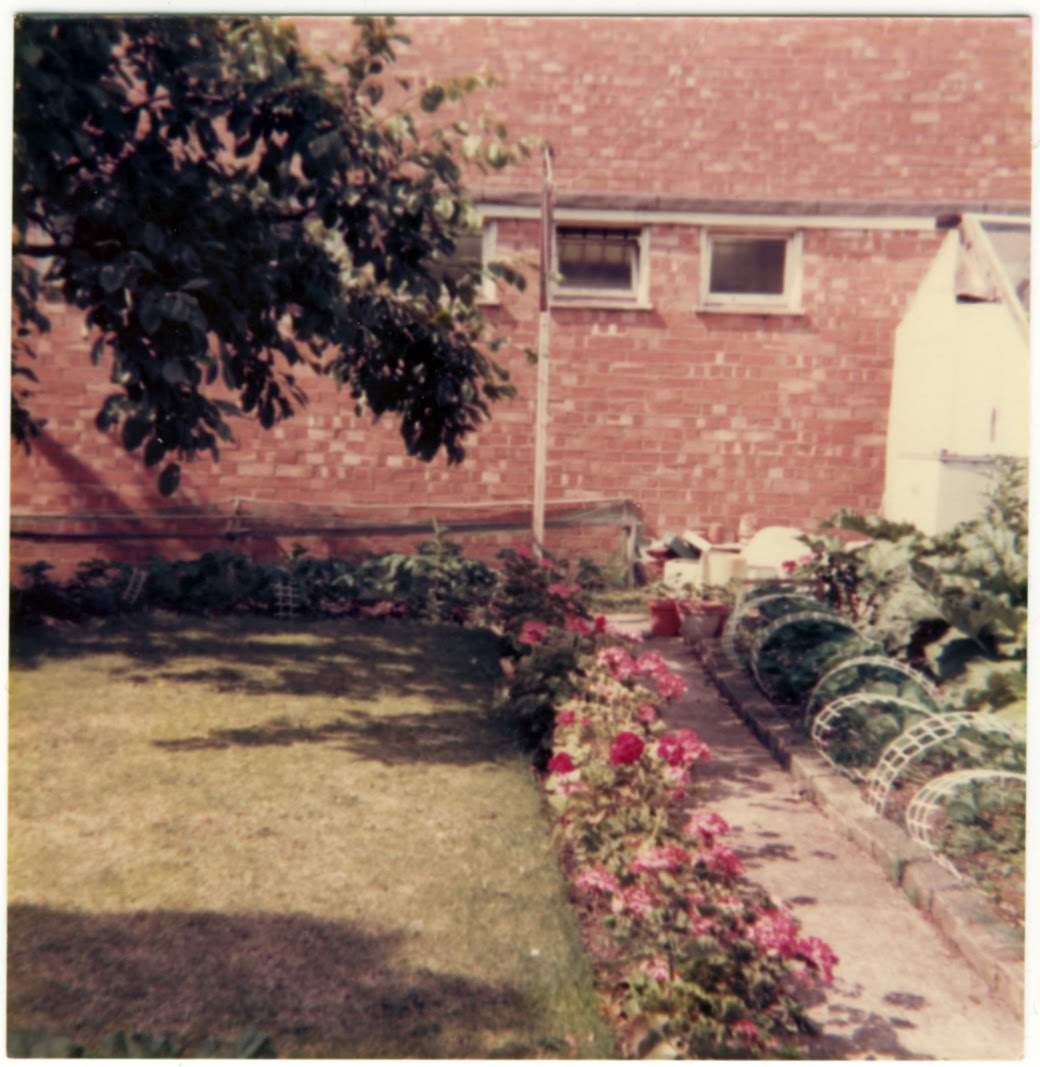 …I remember well my grandad’s vegetable patch, the plastic greenhouse and the Victoria plum tree (all shown above);  the brick outhouses with their giant spiders (in which the red tricycle was kept); the large apple tree and the wooden lattice-work gate. I remember too the giant Christmas tree (pictured below behind the fir tree), planted – when the tree was considerably smaller – when my mum was a girl. 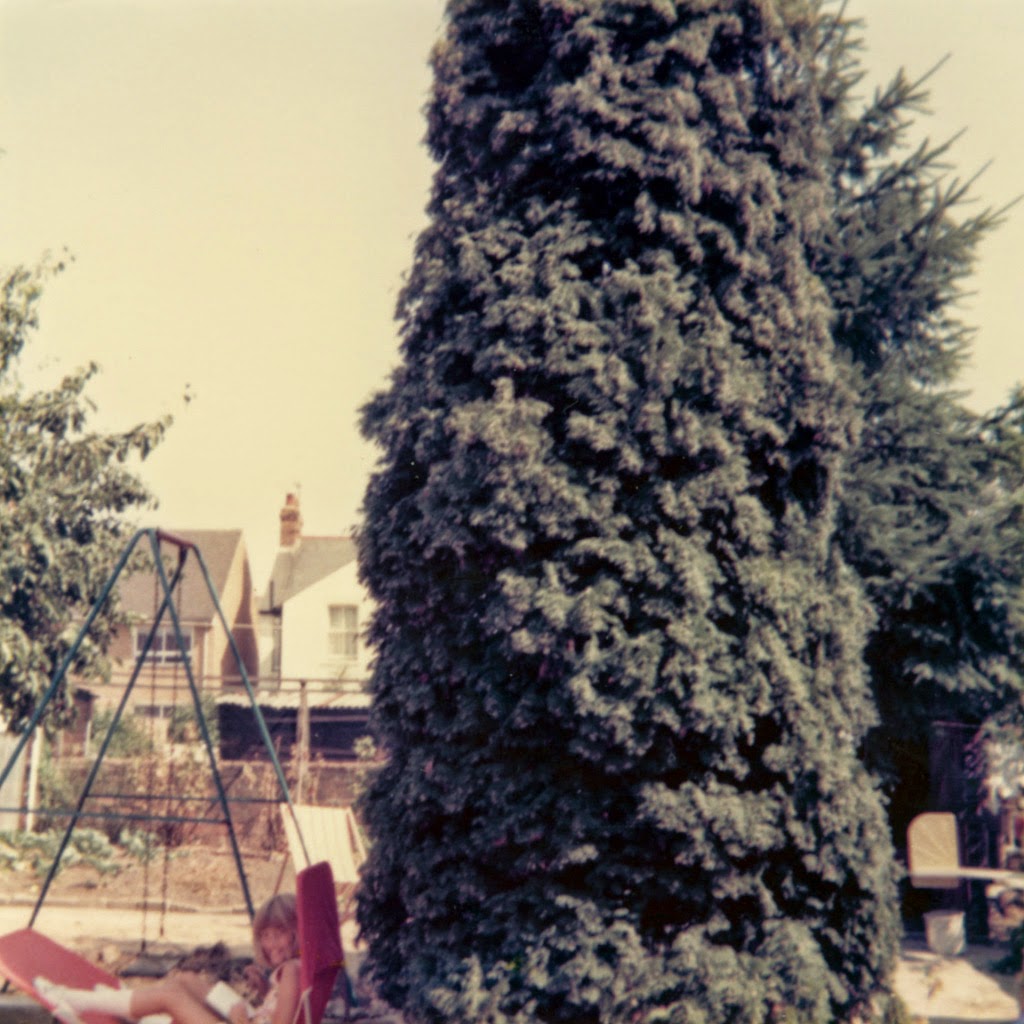 The following two photographs were also taken in Headington, some 60 years earlier at the time of the First World War (or a few years before – the second photograph is possibly 1908). They are by one of the pioneers of autochrome photography, Ethelreda Laing and show her two daughters, Janet and Iris. 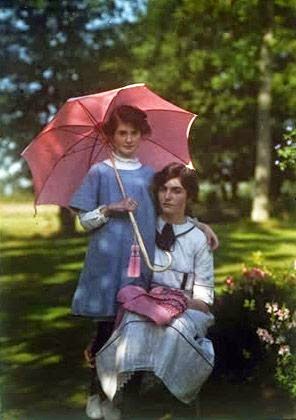 What’s interesting about these photographs is that they were taken in what is now Bury Knowle Park at a time when the house was a private residence. What makes them even more interesting is the fact they are in colour. But what is it about a colour photograph that enables me to better connect with the referent? (This is a subject I started to discuss before: see ‘Empathy and the First World War (Part 2)‘.) 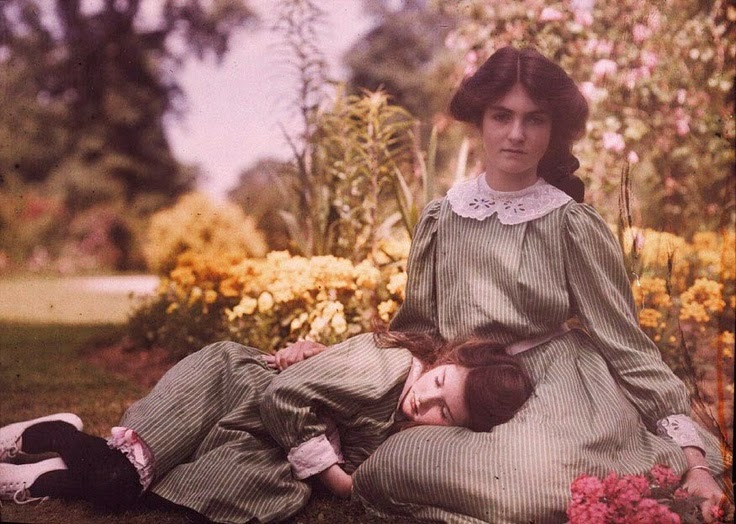 The photograph below shows me and my brother in the garden of the house where we grew up, also in Headington.

This photograph which, like the photograph from Bury Knowle, shows two children enjoying the garden, was taken c.1974. Looking at it now, I’m drawn to the patterns of light and shadow on the fence behind. 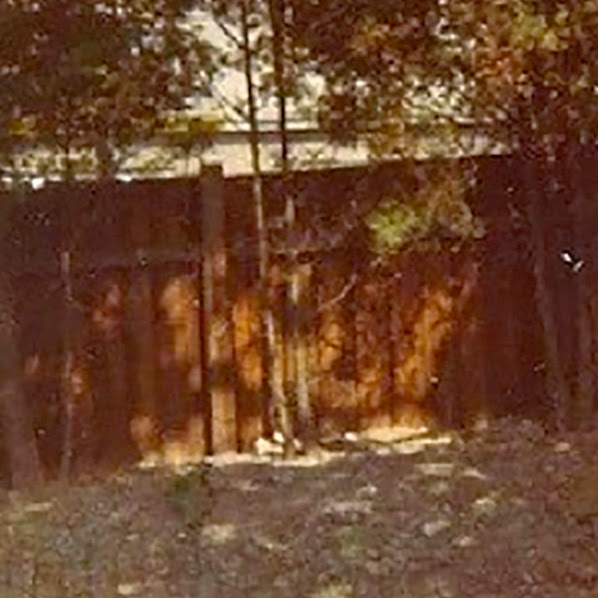 The fences were always well creosoted and when the sun shone they exuded a wonderful smell. I can smell it now, just by looking at this image, but what is more, I can feel the pattern of sun and shadow, the sensation of the cool dry earth below – the smell of the firs. It’s a synaesthetic image in that I can almost taste the pattern.
If the image above was in black and white, I doubt I’d have the same response. When we look at an image in black and white, it seems to me that our memory is stimulated less than if the image is in colour. When looking at photographs taken long before we were born this hardly seems to matter, but when looking at a colour image – such as that of the girls above – taken long ago, something strange seems to happen.
It seems to me, that a colour photograph is more likely to trigger a physical response than one which is black and white.
First of all, I’ll look at a selection of black and white images.
The image below is of my mum and dad. It was taken c.1960 in my grandparents’ garden (as can be gleaned from the windows – seen in the second image above). 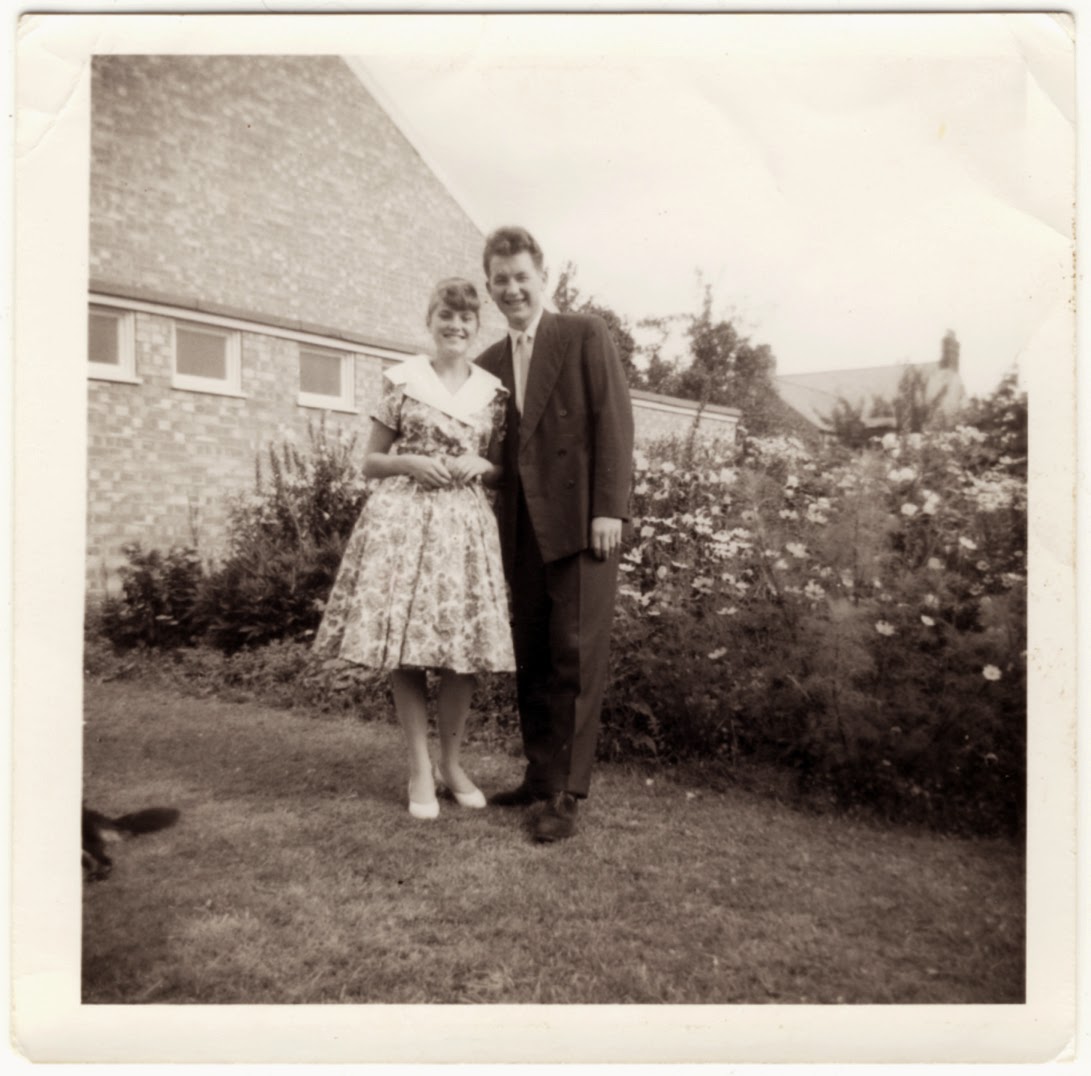 This image, of course, elicits a response in that I recognise my parents and the location. But that is all.
The next image was taken at Carfax, Oxford in 1893 and shows St. Aldates looking south towards Christ Church. 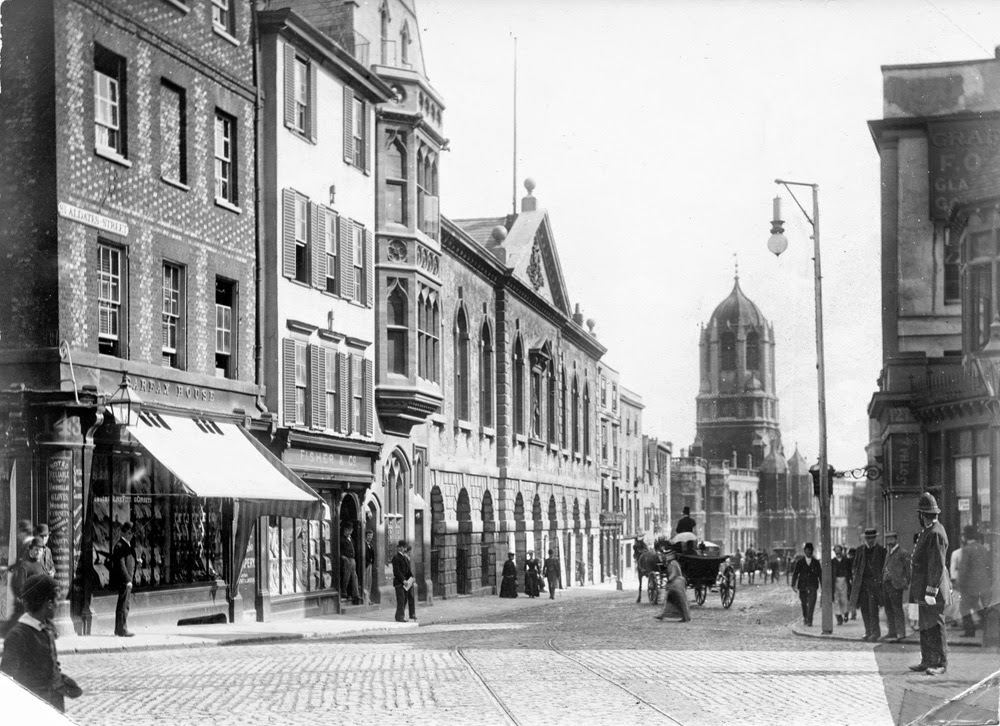 The image also elicits a response in that although most of the buildings shown have all disappeared, Tom Tower – in the distance – is still standing. I recognise the location as one I have experienced countless times before – although of course I could not have experienced what is shown in the photograph.
Looking at the photo more closely, one does begin to establish an empathetic response based on more than just recognition. 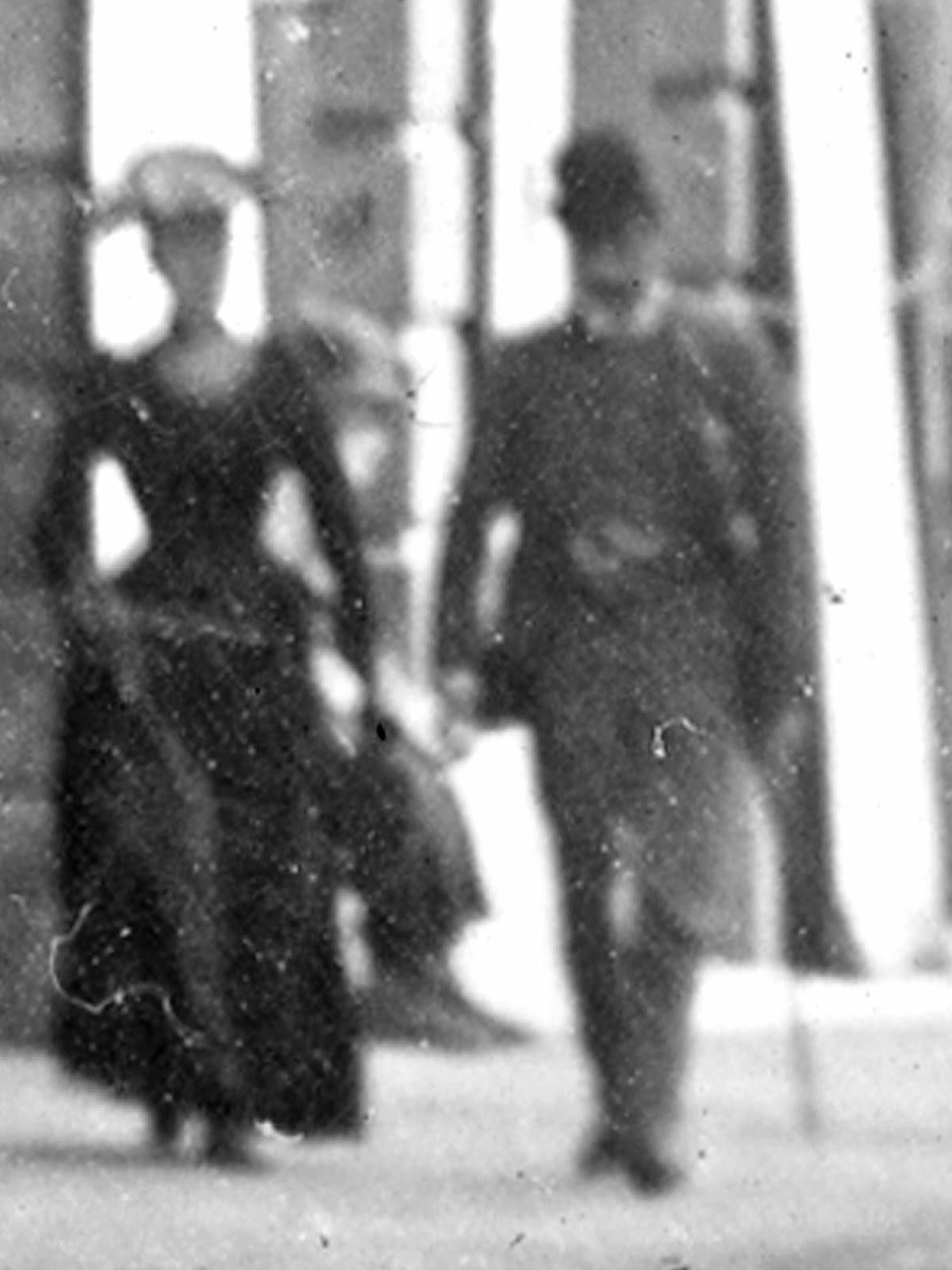 Again this is something I have talked about before but here, empathy is established through the movement of the man and woman. They have no idea that they are being photographed, an obliviousness which is vital for an empathetic response. It is an image of now, of the everyday. We can easily imagine the man and woman, unfrozen by time and the camera’s shutter, continuing up past the old Town Hall towards Carfax, deep in conversation.
But how do old photographs differ when they are in colour? 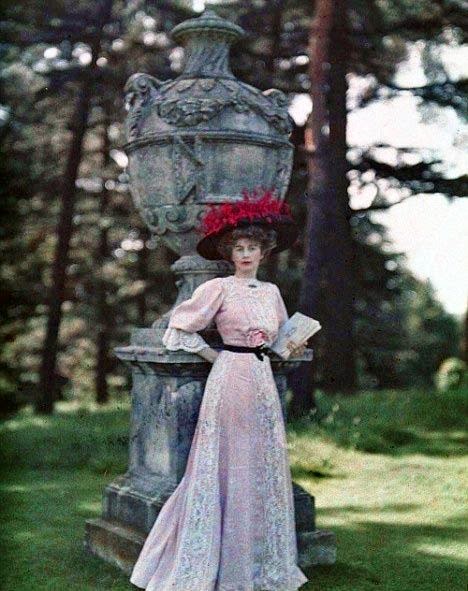 This photograph was taken 13 years after the one above and what strikes me about it, is the fact that like the one above, taken in my garden, I can feel it. And what I feel is the temperature difference between the shadows and the lawn where the sun is shining. I can imagine the texture of the grass and the tree, I can hear the wind and feel the air; and yet this photograph was taken 108 years ago. The shadows are living – they are not dead as they can often be in black and white photographs; they have a colour.
The same can be said of the next image, taken during the First World War. 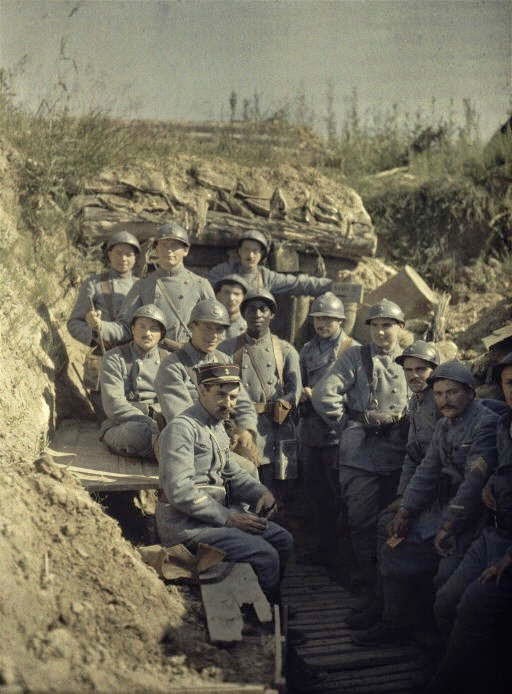 One can feel the light, the heat of the sun; the cool of the shadows. Again the shadows live. The image too is abundant with texture which I know would be absent if the image was in black and white.
It seems to me that I’m responding to these images kinaesthetically; my mind, memories and experience read them, which is why perhaps I find often these old colour photographs – while amazing – so unsettling. My mind reads them, my body feels them and yet when the image was taken, I did not exist. There is a conflict between existence and non-existence; the age old tussle between life and death.
There is no time in the past; all those things shown in the images above are as much a part of the past as each other. All there is to separate them is a rule against which, the increasing improbability of my coming into being is measured.