Following on from my previous two entries regarding ‘Xs‘ (the signature of the illiterate, a secret location marked on a map), I wanted to look briefly at another use of the mark, that of course being the kiss. I was prompted to do this whilst selecting a number of World War One postcards for a new project website; www.8may.org – a project I hope to carry out next year. Most of the postcards are blank, but on a few there is some writing; the scrawl of a soldier or a more recent label, ‘Mum’s uncle.’ for example. One particular card however took my interest for it contained the mark I had recently been applying to my paintings. In my most recent versions of the ‘X’ paintings (those which have been obliterated by graphite powder) I have been scratching the symbol into the dust whilst considering the many anonymous miners who lost their lives deep underground at the time my great, great-great and great-great-great grandfathers were working in the pits of South Wales.

As I’ve written before, Rainer Maria Rilke wrote that those who die leave their names behind as a child leaves off playing with a broken toy. Those who died in the mines left their names underground; most would not have known how to write them, doing instead what my ancestors did and marking documents only with an ‘X’. And many of those men from the 19th century have all but been forgotten, their names discarded, swept away like Rilke’s broken toys. Even their graves might be lost, their remains buried and marked with an ‘X’, secrets known only by the earth itself. 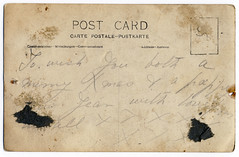 The Xs on the postcard above are also marks of anonymity. We know they are kisses but we don’t know who they’re for or who gave them. But we know they are symbols of a relationship which once existed, whether between lovers, friends or relations; someone loved someone else. Many of those who fought in the Great War never returned home – all that did return were a few words on a postcard; and ‘Xs‘ – farewell kisses as they came to be. Hundreds of thousands of men not only lost their lives, but they have no known grave. Many too lost their names altogether. These Xs on the postcard therefore become symbols for their future anonymity, their unknown graves; their lost names.

And the Xs which I’ve scratched into dust on my paintings also become a kind of farewell; a broken name, a secret location in time. They also become a farewell kiss to the world.