In a previous blog (Imagination and Memory) I wrote the following:

“Going back to my childhood, my imagination provided me with a means of escape (not that I needed to escape anywhere – I was fortunate enough to have the perfect upbringing). I’d always wanted to see the world unspoilt, an Arcadian vision without cars, planes, pollution, machines or any trace of the modern. And in a sense, this is I believe, what first fired my interest in the past.”

This is one of the maps in question, photographed in my bedroom around 1983. 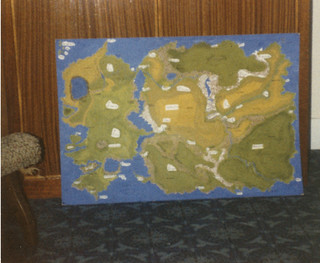 Thinking again about ‘a means of escape’, I realised that despite what I’d written, there was a ‘need’ to escape somewhere. Throughout the 1980s the Cold War was at its height and although recollections of the period bring back many happy memories, there was always, simmering in the background, the anxiety of a nuclear conflagration. Every time a ‘crisis’ was reported on the news, my dreams at the time would always be the same: I’d watch from my garden as a huge mushroom cloud billowed up above the horizon. And in the days before 24 hour rolling news, the refrain “we interrupt this programme to bring you a newsflash” would stop my heart.

The worlds that I created were places where, quite simply, there were no nuclear weapons, and therefore no risk of nuclear war, but just as these imaginary places offered a means of escape, so did history – in particular pre-industrial history and to bring the past to life, for example the mediaeval world which was especially compelling, I had to use – just as I do now – my imagination. In Leviathan, Thomas Hobbes writes:

“Imagination and memory are but one thing, which for divers consideration hath divers names.”

One could perhaps say the same about history. Certainly in my mind, those three things – history, memory and imagination – were conflated, creating a landscape in which I could wander at my leisure; a place to which I could escape. And it was through the creation of maps that I found my way there.