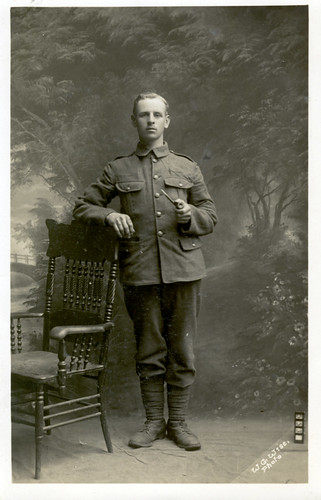 I sometimes think of these images as pieces of theatre. There’s the stage on which a man stands wearing his costume. He leans on a prop – a chair, the scenery hanging behind him; a pastoral scene with trees and flowers; a path and a bridge crossing a river. And as in any piece of theatre, the costume, scenery and props combine to tell a story. But what is the story?

The First World War: this young soldier would have played his part; perhaps one of the nearly 900,000 British men killed in action. Or one of the over 1.6 million wounded. But there is nothing in the backdrop or prop that points us towards that tale. Just the costume.

So what story does the scenery tell us? A soldier stands in a landscape; an idyllic world seemingly untouched yet threatened by a war in which the soldier has yet to play his part. (Or rather, the war has yet to play a part in the soldier’s life: an important distinction, for if the story or ‘play’ is History, then this soldier’s part would be a minor one. Imagine a vast stage, filled with hundreds, maybe thousands of actors. Most of them would say nothing, remaining part of the anonymous ‘chorus’ (exiting and entering the stage) leaving the lead actors, playing the parts of named politicians and Generals, to speak any lines. Yet of course, in his own life story, this soldier would play the lead. It would be as if towards the end of the ‘play’, one of those hundreds or thousands of extras making up the chorus, would step forward and begin to speak.)

There is another story. The war is over. The threatened landscape is secure, or perhaps the traumatic landscape is healed. The trees have returned, as have the flowers. But what of the story? The soldier still wears his uniform. The actor is still in his costume, seemingly unscathed.
It was as I considered this, that I recalled reading Rainer Maria Rilke’s Duino Elegies. In the Tenth elegy we read:
And gently she guides him through the vast
Keening landscape, shows him temple columns,
ruins of castles from which the Keening princes
Once wisely governed the land. She shows him
the towering trees of tears, the fields of melancholy
in bloom (the living know this only in gentle leaf).
And she shows him grazing herds of mourning
and sometimes a startled bird draws far off
and scrawls flatly across their upturned gaze
and flies an image of its solitary cry….
Dizzied still by his early death, the youth’s eyes
can hardly grasp it. But her gaze frightens
an owl from the crown’s brim so it brushes
slow strokes downwards on the cheek – the one
with the fullest curve – and faintly,
in death’s newly sharpened sense of hearing,
as on a doubled and unfolded page,
it sketches for him the indescribable outline.
For me, the story told by these postcards is not one of war, or indeed the imminence of war, but rather the war’s end. The soldier has played his part.