I have written a great deal about how I perceive the past and how I use objects and the landscape to find  ways back to times before I was born. In my text ‘What is History‘ I conclude with the following paragraph.

“History, as we have seen, [might be described as] an individual’s progression through life, an interaction between the present and the past. It follows, having seen how the material or psychical existence of things extends much further back than their creation that history spanning a period of time greater than an individual’s lifetime is like a knotted string comprising individual fragments; fragments within which – in the words of Henri Bortoft – the whole is immanent.  The whole history of all that’s gone before is imminent in every one of its parts; those parts being the individual.”

I was reminded as I read this paragraph – and in particular the last line – of the poet John Donne and the following words taken from his XVII Meditation:

“No man is an island, entire of itself; every man is a piece of the continent, a part of the main. If a clod be washed away by the sea, Europe is the less, as well as if a promontory were, as well as if a manor of thy friend’s or of thine own were: any man’s death diminishes me, because I am involved in mankind, and therefore never send to know for whom the bell tolls; it tolls for thee.”

Having read this, I thought about some of the work I’ve been making for my forthcoming exhibition in Nottingham, Mine the Mountain. Two pieces are maps of invented landscapes, one of which (the first shown below) is based directly on a map I created as a child, the other based on the outline of Belzec Death Camp as seen in an aerial view of 1944. 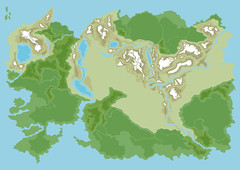 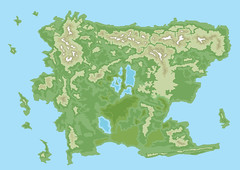 The first map, as I have said, is a contemporary reproduction of one I made as a child. It’s therefore essentially a map of an individual – of me, as I was at the time. It is a place that, although imagined, was real nonetheless, one based on fragments of my memory and my perception of the distant past.

Having been to Wales (in 2008) and imagined all my distant forebears walking the various tracks and roads around the village where my grandmother grew up, I realised how I was very much a part of those places and they in turn were part of who I was. I had existed – at least potentially – in those places long before I was born. All those roads, paths and trackways led in the ‘end’ to me. Of course that sounds a rather egocentric way of perceiving the world and its history, but then I’m not suggesting that I am the only intended outcome. Just as my invented world – my map of me – was made of all those bits of the past I loved to imagine as a child (the untouched forests, the unpolluted rivers and streams) so I can see how this foreshadowed my current thoughts on history; how I am indeed (as we all are) a place, one made of all those places in which my ancestors walked, lived and died.

A quote from a source which is of huge importance to me and my work (Christopher Tilley’s ‘The Materiality of Stone, Explorations in Landscape Phenomenology’.)

“Lived bodies belong to places and help to constitute them so much so that the person can become the place (Gaffin 1996). The body is the medium through which we know place. Places constitute bodies, and vice versa, and bodies and places constitute landscapes. Places gather together persons, memories, structures, histories, myths and symbols.”

Alongside the second map I will be showing a piece of text taken from the diary of Rutka Laskier describing what appears to be an imaginary landscape, though one perhaps based on memories of family holidays to Zakopane, Poland. She was a child when she died in the Holocaust and by putting the two maps together, I want to reflect on the numbers of children who perished, as well as illustrating how within each child – within everyone – the whole of humanity is immanent.

John Donne’s words serve to illustrate this sentiment further still. No man, woman or child is an island. So whilst I have created two maps of individuals, through Donne’s words we can see how these islands comprise pieces of everybody else.

If a clod be washed away by the sea, Europe is the less.