If you visit the Westgate Library in Oxford, and make your way to the second floor, to the centre for Oxfordshire Studies; if you ask to see the microfilm of Jackson’s Oxford Journal for February 9th 1771, you will find, somewhere within its pages, the following notice:

“Whereas a person (supposed to be a Gentleman’s Servant) went out of Oxford, December 12th 1770 over Magdalen Bridge and took the Watlington Road riding a horse with a long tail and leading another with a cut tail on which a Portmanteau was tied: whoever recollects seeing the same person and can give information of his name and place of abode so that he may be spoke withal, shall on such proof receive half a guinea reward from the printer.”

This enigmatic text contains just 80 words, but many questions come to mind when I read it.

Who was this man?
Where was he going?
Who was he working for?
What was in the portmanteau? And who wanted to know?
What had he done that the need to ‘speak withal’ was worthy of a reward? And why was the notice only published two months after the man had left town? Would anyone recall seeing him so long after the fact?

The man described has left neither name nor grave to posterity. Indeed, all that would seem to remain is this footprint of sorts, one comprising a few words in a text pregnant with secrets, lost in the pages of a long forgotten paper.

“…we each derived a certain satisfaction from the mannerism, being still at the age in which one believes that one gives a thing real existence by giving it a name.”

The man described in our newspaper clipping doesn’t have a name. Does it mean therefore he has – or rather had – no real existence? The answer to that is of course, no. Certainly he’s dead, but whereas the Dead so often leave their names (as Rilke so beautifully put it in The Duino Elegies, ‘as a child leaves off playing with a broken toy’) in documents, monuments, cemeteries and so on, this man has left something else entirely. To name him would almost be to kill him.

In many respects he’s not unlike those nameless men and women one often finds in old black and white photographs, for example that below, taken on the same bridge 125 years after the stranger crossed it. 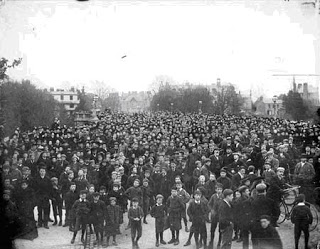 What’s most intriguing about the notice, is the scene it depicts. Despite its few words we can nonetheless form an image of something which happened long before we were born; a scene in which the most insignificant detail we can imagine – perhaps a leaf fallen from a tree drifting on the river below the bridge – was more a part of the world  than we as individuals – as impossibly unlikely beings – were ever, at that moment, likely to be; even my great-great-great-great-grandfather, Samuel Stevens, born in Oxford in 1776, and to me impossibly distant, was just a step away from not being born at all.

A more ‘equivalent’ image to the text might be the detail below: 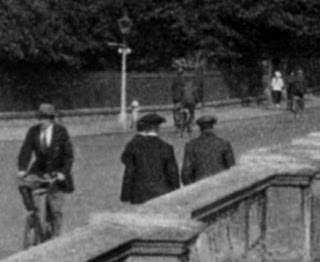 Taken from a photograph, itself taken (as far as I can tell) some time in the 1920s, it’s part of a wider view of Magdalen Bridge facing west towards Magdalen Tower. No-one in this photograph is aware the picture’s being taken and in this sense it’s a genuine representation of history; an insignificant, everyday moment in time.

This project – The Gentleman’s Servant – will set out to answer the questions posed above in full knowledge of the fact that it will fail. But what interests me is, not so much the answers, but the process of looking: of researching, collecting, archiving and storytelling.