Recently I bought ‘The Book of Shadows’ (edited by Jefferey Fraenkel), which I found whilst browsing in Blackwell’s bookshop, a book of found photographs all of which contain the shadow of the photographer along with that which is photographed. It’s something in which I have been interested for some time with some of my own family photographs containing just such shadows.

It called to mind as I flicked through the pages, looking at photographs such as that below, the words of Austerlitz in W.G. Sebald’s book of the same name, in which the character Austerlitz states that fortifications:

“…cast the shadow of their own destruction before them, and are designed from the first with an eye to their later existence as ruins.”

In many respects, the same could be said of any building or even, individuals. We all cast the shadow of our own mortlity before us, and, in respect of what Barthes has written in Camera Lucida (“I observe with horror an anterior future of which death is the stake… I shudder… over a catastrophe which has already occurred. Whether or not the subject is already dead, every photograph is this catastrophe.”) these shadows in these pictures could be said to be just that.

Below is one of the images from the book. There is something poetic about this image in particular, in the way the train tracks lead us to the distance, to the future, almost as if they are there to transport this shadow of the photographer’s own ‘destruction’.

Below is one from my own collection showing my grandfather, my aunt and my mother. 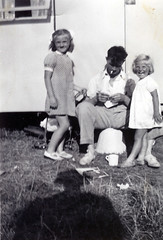