Remarkable evidence of those who lived in Oxford around the time the notice appeared in Jackson’s Oxford Journal can be found in a survey carried out by John Gwynn in 1772 (John Gwynn also designed the new Magdalen Bridge). Made as part of continuing improvements originating with the Mileways Act of 1771, the actions of Gwynn (who could be seen around town measuring the fronts of houses and other buildings) aroused suspicion and even alarm among the city’s residents. The survey itself was required to calculate the costs of repaving the city’s streets for which each property was liable to pay a share depending on the size of their facades. What we have as a result is a wonderful record; a long list of names of all the city’s residents (or rather property owners), the streets on which they lived (or owned property) and the size of their dwellings – given in yards, feet and inches. It’s interesting for me that among the many Stevenses listed in the survey might well be my great-great-great-great-great-grandparents.

The page reproduced below, is taken from the survey and represents the bottom end of the High Street where it meets Magdalen Bridge – the Bridge can be seen listed below the name of a Dr. Sibthorpe. The Physick Garden above, is the old name for what is now the Botanic Gardens. 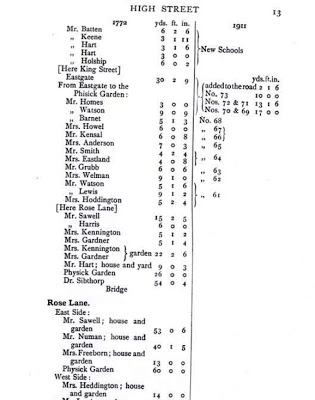