When I told people that I would be installing almost 200 markers in Shotover Woods as part of a Holocaust Memorial Day project (The Woods, Breathing), many said the markers wouldn’t stay there long. I however, believing that people – even if they didn’t like the work – would at least respect it, put them in anyway. Besides, I believed the work was powerful, using the act of walking through woods as a means of identifying in a very small way with those who suffered during the Holocaust. And, furthermore, I believe anything which attempts to engage people with something like the Holocaust is worth pursuing. However, within one hour of completing the installation, 3 had already been stolen and over the coming days, the labels were turning up in small piles along with the stands. Clearly there were two different types of vandals at work; those who stole or threw the stands into the undergrowth, and those who were at least a little more considerate. I could almost imagine these methodical vandals as they made their small piles, saying to themselves (and indeed to me) “not here thank you.”

I have made work like this before in public spaces in the city centre. In one work (‘Murder‘) I installed 200 stands in a cemetery in Jericho, a place frequented by drinkers and rough sleepers. Not one of the stands was stolen and only one label was lost. If anything, from my experience, those we might often think of as being on the ‘fringes’ of society are often the most interested. Sadly the same can’t be said of others.

Today I went up to Shotover to take what was left away and found that since my last visit a great many more of the stands had been taken; almost 80 out of the 198 had been removed (at £5 each this is quite a loss) . Furthermore, someone had taken the time to scrawl messages onto some of the labels having clearly not bothered to learn what the work was about.

This vandalism was not I believe anything to do with its theme (the Holocaust) but rather an expression of petty narrow-mindedness. Someone who enjoyed the woods, someone who obviously walks through them regularly objected to ‘their walk’ being changed these last few days. One label they defaced is quite revealing: 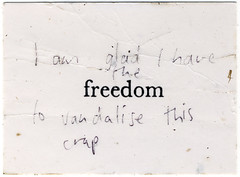 This work is all about freedom; something denied to so many not only during the Holocaust but in countless times and places, both before and since. Yet all this individual can do with his or her freedom is scrawl remarks and obscenities, to deface a work which aims to remember those for whom freedom was denied as was, in the end, the right to life itself.

Looking at the vandalism by this particular individual, it’s clear they didn’t understand what the work was about. They seemed to think that I was a girl… 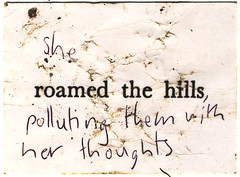 …who’d written nice words about the wood. The word civilization on one of the labels and what they wrote beneath is testament to this. What they wrote is also somewhat ironic. 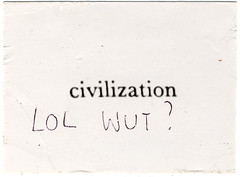