The project I am working on for the Travel and Trauma (Dark Tourism) conference (11-12th April) is now – in light of Elie Wiesel’s comments regarding the Holocaust’s visual representation – called The Gate. I shall be writing on the windows of the Larkin Room at St. John’s college (see photograph below) using text I wrote whilst sitting and looking out the window for a period of one hour on 26th March 2008, between 12 and 1pm. 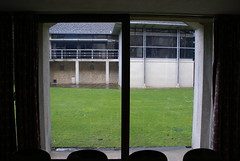 The text to go on the glass is as follows: