Each string (in what I have so far called the ‘net’) represents in its ‘cut end’ the end of a path, the end of a life. Each string also represents a life entire as measured by the three fates. Furthermore they could be said, as a group to represent the combination of paths which, at a specific moment in time created one of the many terrible moments of the Holocaust. Also, the image of the whole represents the sum of the snatched visions of the tower at Birkenau (the drawings).

Of the physical appearance of the net, the following quote from Fernando Pessoa’s ‘The Book of Disquiet’ is very pertinent:

The image of the net looks like a ‘dream-catcher’ and in many ways that works in respect of this theme; dreams which many would have had of going back home, trapped in its strings. (There is also the idea of the writes of the telegraph poles carrying messages out of the camp and across Europe).

I was also thinking today about work by two of my colleagues which was very much to do with colour. This made me look at my own work (which is anything but colourful) and the subsequent contrast interested me. It reminded me of a television programme I watched last night about the photographer Albert-Kahn who documented the First World War in colour photographs. When we think of the past, in terms of the war, pre-war and Victorian periods, we think of it in terms of black and white. When we see colour photographs of the First World War they seem to validate reality – the very fact of time before we were born.

In my work there is no colour as such, but it is there, just as colour is there in Black and White photographs. 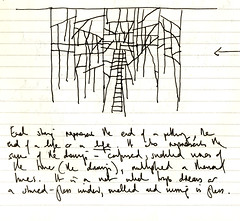 In the image above, I was reminded of the stained glass windows in the many tombs of Montmartre and Pere Lachaise cemeteries. The lines of the image (of the net) could just as easily be the lead work of a broken stained-glass window; what is missing of course is the colour. 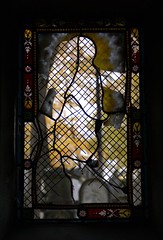 Colour could be a validating factor in this case. Often when we think of the Holocaust or World War One for example, we see them in Black and White (like the cats (although evidence suggests they may have limited colour vision) we saw in the cemetery); we often think of the weather as being dull, grey, miserable, always winter, and when we read evidence of the time that talks of blue sky and sun, it always seems somehow shocking. The following is an extract from Tadeusz Borowski’s “This Way for the Gas Ladies and Gentlemen.”

“‘…You have no idea how tremendous the world looks when you fall out of a closed, packed freight car! The sky is so high…’
‘…and blue…’
‘Exactly, blue, and the trees smell wonderful. The forest – you want to take it in your hand!'”

When imagining arrival at somewhere like Birkenau, one imagines it being night, or the smoke from the chimneys hiding the sky like a fog. But of course, people would have arrived on beautiful summer days, when colour was abundant.