I’d known about Highgate cemetery, principally as the last resting place of Karl Marx, but this was the first time I had visited it. Having left Archways Tube station, I walked up Highgate Hill, through the pleasant surroundings of Waterlow Park and found my outside a large iron gate, standing amongst a small group of people waiting to go in. The cemetery itself is divided into two sections; the older West and the newer East. The East side can be visited at any time, but the West can only be accessed as part of a guided tour. It was for this tour that we along with a dozen others waited our turn.

I had the feeling that we were queuing to be let inside a prison. Not that I’ve ever queued for such a reason. It was simply the fact that we were locked outside waiting for our appointed time to visit, when those kept behind the walls would be allowed to receive us (there is something similar too in the architecture of the gatehouse and that which one sees in some Victorian prisons). Also, I couldn’t help but think of King Kong – the wall and the gates behind which the giant beast was kept. There was certainly a sense of anticipation, which had, it seems, been in part been created by the cemetery’s architect Stephen Geary. 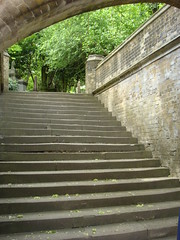 The way into the cemetery itself, from the courtyard, is via a flight of steps. When standing in the courtyard, the cemetery cannot be seen; it’s only when walking through the archway leading to the steps, at the top of which one can see the greenery and the first of the monuments, that this vast cemetery is slowly revealed.

There is certainly more than a hint of theatre in how one enters, and the fact one ascends the stairs into the world of the dead serves to reflect a belief in the continuity of life after death; by ascending the steps we follow in the footsteps of those long since passed away, as if they were not borne here by pallbearers, horses and hearse, but had walked here themselves. Their lives continue and of course life continues through our present-day visiting.

It is this which makes the place feel strangely alive. That is not to suggest of course that those interred within are indeed still living in the physical sense of the word, but that the memory of their lives is almost tangible. Many of those buried here would have enjoyed the finer things that Victorian life could offer, things which we modern-day visitors can only know through books, films and television. These people lived the lives that we can only imagine. 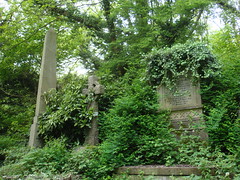 I do not wish however to over-romanticise their lives, by suggesting that they were all happy and spent their time at balls, dressed in splendid costumes; that their lives were indeed little more than costume dramas; that would be naive to say the least. But nonetheless, as I walked around the cemetery, I was aware as I read the names on the tumbledown, but nonetheless impressive monuments, that the names inscribed upon them – or at least some of them, particularly in the Circle of Lebanon (which reminded me, in some respects, of the Great Crescent in Bath which we’d visited the day before) – would have been known in society. They would have called to mind faces, voices, attitudes and characters where today they are labels for empty spaces.

The Victorian attitude to death – the strong belief in the afterlife which I’ve already mentioned – is clearly apparent in this cemetery; religion was of course very important to them. Strange then that they should choose to design their funerary monuments in the style of Ancient Egyptian tombs and temples. Perhaps this was as much down to the fashion of the time as anything else, but could it also be that the Ancient Egyptians’ attitude to death and remembrance was somehow a confirmation of a continued existence? That’s not to say – and this goes without saying – that Victorians shared in the Polytheistic beliefs of the Pharaohs, but that the very age and ancient duration of their (the Pharaohs’) memory, which had and has spanned several millennia, promised an afterlife of a different kind; one that would be shared with living. Alongside the immortality of the soul, the endurance of the name was also important. 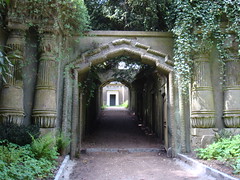 Such large and elaborate monuments are rebuttals of death itself. They are large and elaborate parts of the living world and, it could be argued, belie the uncertainty of a continued heavenly existence. They occupy a space in the land of the living, just as did the deceased, and when we read a name, we hear within our minds, albeit silently, the sound of a name that was spoken countless times. We hear it muffled, like bells were muffled at times of death.

I was reminded when reflecting on this of some work I did on Old Musical Instruments in the Ashmolean Museum in Oxford. It might sound obvious, but having studied materials used in the making of a Lira di Braccio as well as its shape, I became aware that it was so designed and made so as to make a sound. Names too are like this. They are given so as to be said.

Considering the perpetuity of names and memory amidst the slow convulsions of the ground , I coudn’t help but think of the writings of Sir Thomas Browne, who in Urne Burial, published in 1658, wrote some of the most beautiful lines ever put down on the subject of mortality and remembrance:

“And therefore restlesse inquietude for the diuturnity of our memories unto present considerations seems vanity almost out of date, and superanuated peece of folly. We cannot hope to live so long in our names as some have done in their persons, one face of Janus holds no proportion unto the other. ‘Tis too late to be ambitious. The great mutations of the world are acted, our time may be too short for our designes. To extend our memories by Monuments, whose death we dayly pray for, and whose durations we cannot hope, without injury to our expectations in the advent of the last day, were a contradiction to our beliefs. We whose generations are ordained in this setting part of time, are providentially taken off from such imaginations. And being necessitated to eye the remaining particle of futurity, are naturally constituted unto thoughts of the next world, and cannot excusably decline the consideration of that duration, which maketh Pyramids pillars of snow, and all that’s past a moment.
[…]There is no antidote against the Opium of time, which temporally considereth all things; Our Fathers finde their graves in our short memories, and sadly tell us how we may be buried in our Survivors. Grave-stones tell truth scarce fourty years; Generations passe while some trees stand, and old Families last not three Oaks. To be read by bare Inscriptions like many in Gruter, to hope for Eternity by Ænigmaticall Epithetes, or first letters of our names, to be studied by Antiquaries, who we were, and have new Names given us like many of the Mummies, are cold consolations unto the students of perpetuity, even by everlasting Languages.
[…]Darknesse and light divide the course of time, and oblivion shares with memory a great part even of our living beings; we slightly remember our felicities, and the smartest stroaks of affliction leave but short smart upon us.”

Walking in the Circle of Lebanon (reached by a gateway which itself could be a cast off from a production of Aida) one couldn’t help but think of the families entombed within the sepulchres and, as I’ve already written, the lives which they led in Victorian society. The dead names carved in the stone were now as hollow and as empty as whatever lay behind the closed doors. And up beyond the Circle of Lebanon, the once wealthy inhabitants of the cemetery, far from the whirligig of their colourful lives were now just bones turned over in the soil. The trees, growing all around, seemed to be reaching with their roots deep into the ground like a man searching for change in his pockets, elbowing their way between the tombstones, staggering amongst the ivy trusses, as if driven mad by the idea of nothing. 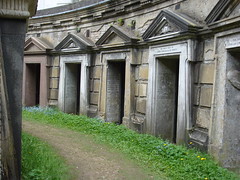 In a recent study of another cemetery, this time in Wolvercote, Oxford, I came to the conclusion through a particular process of observation, that there were no such things as cemeteries. Well, of course there are cemeteries, but in a wider, more holistic view there is just the cycle of birth, life and death, whether those cycles are applied to the existences of human beings, animals or leaves. Where those leaves fall and where bodies are laid to rest is in the end quite irrelevant.

Highgate Cemetery itself was saved because of the threat of development. For many years it was left to decay, grown over with ivy, brambles and trees and suffering from vandalism. Unchecked, this cemetery could have disappeared along with all the names and their monuments. Thankfully, through the dedication of a relatively small number of people, the cemetery remains a place that we can visit today. But why is it we do so? 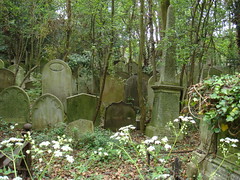 There are of course many reasons why a place like Highgate is of interest, not least from a purely historical perspective. The Victorian attitude towards death is a subject in itself, as are the styles and designs of the various funerary monuments. But for many of us who visit I think the reasons run much deeper.

The monuments we see were put there for us. As we walk, we try to imagine the lives of those who lived a century before we were even born, when we did not exist. And now, when the those who lived back then, exist only in the hollow shell of their names, so we cast our eyes to the future when our names will also no longer be spoken.
Back in 2007, Monika and I visited Pere Lachaise and Montmartre cemeteries in Paris, and reflecting on our visits I wrote:

“Cemeteries have something in common with old photographs, particularly when we consider the the writing of Roland Barthes who writes that photographs have within them the ‘catastrophe of death,’ and that, ‘in the photograph, Time’s immobilisation assumes only an excessive, monstrous mode: Time is engorged…’. In cemeteries too, Time is somehow engorged and contains in abundance that catastophe. One has the impression of time standing still, stopped by the dates of death carved into the many gravestones and tombs, yet we know, all too well, that time continues.”

Perhaps it’s Time, engorged within the bounds of the cemetery that skews the gravestones and monuments.

As I wrote earlier, the people buried in this cemetery lived lives that we can only imagine. Similarly, their existence now is one that we can only conceive at the very limits of our imaginations. My aunt once said to me, “you have to believe in something,” ergo, you can’t believe in nothing. And this is certainly true, I can’t imagine nothing, whether that nothing is all the time before I was born or all the time that will come after my death. Cemeteries, like any historical record, building or object tell us there was something and that there always will be something.

Cemeteries point to both our past and future non-existence at a moment when we feel the present most acutely.

As Sir Thomas Browne wrote in his conclusion to Urne Burial:

“‘Tis all one to lye in St Innocents* Church-yard, as in the Sands of Ægypt: Ready to be any thing, in the extasie of being ever, and as content with six foot as the Moles of Adrainus**.
*in Paris where bodies soon consume.
**A stately Mausoleum or sepulchral pyle built by Adrianus in Rome, where now standeth the Castle of St. Angelo.