One has to remove the future from a past event to really understand its ‘presentness’. One has to view historical (‘Herodotus’ – see Walter Benjamin and Objects) events as being on the periphery, whilst the mean and the commonplace (‘morning paper’) take centre stage. It is the distance which interests me, the distance from the heroic or ‘main’ event and the historical perspective this gives us.

Bortoft’s theory of authentic wholeness could be applied to history. A great event, such as a coronation (let’s say, that of Elizabeth I), is not a whole in itself. Step outside the ceremony, outside the city and into the countryside; walk into a tavern… what is happening there, at the exact moment of the coronation? Let’s say a man sits at a table eating his dinner, enjoying a drink. The moment of the coronation is not simply about the ceremony but the moment in time (some time on January 15, 1559); that moment, of which the Queen and the man in the house are equal parts, although history has forgotten one and kept alive the other. Within both these people (parts), the moment (the whole) is immanent.

The man in the tavern pours his wine from a jug; 450 years later and that jug is in a display case in a museum, freed as Benjamin would have it from the ‘drudgery of its usefulness.’ For us to see it properly as it stands behind the glass, we need to re-impose that drudgery, we need to see it as it was, when it was useful.

Returning to the idea of distance and perspective: the distant elements in my old holiday photographs on which I have been doing some work, as well as those in old photographs (windows and bicycles) coincide to some degree with what I have written above. When I look at a photograph, taken during a family holiday in the late 1970s, I see the people I recognise, whether that’s myself, my brother, parents or grandparents. But there are often others, all of whom were a part of that moment (such as the girl below who was standing in the distance of one of our snaps). 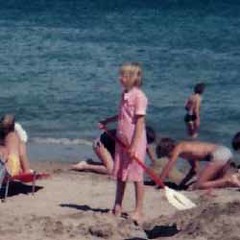 Returning to objects: how do we re-impose the ‘drudgery of an object’s usefulness’ back onto the object? Think of the old musical instruments in the museum. How did I give it back its usefulness? By using the Goethean method of observing, and, in particular, by placing it back – through use of the imagination – in its own time. Although I wasn’t looking at the specific ‘gesture’ of things at that time, I believe I found the gesture of the lira di braccio nonetheless.

So, returning to the man in the tavern; what are the elements of that place which one would need to understand in order to re-construct it through the imagination? Objects (contemporary and old), environments (the room itself and elements thereof), conversations…