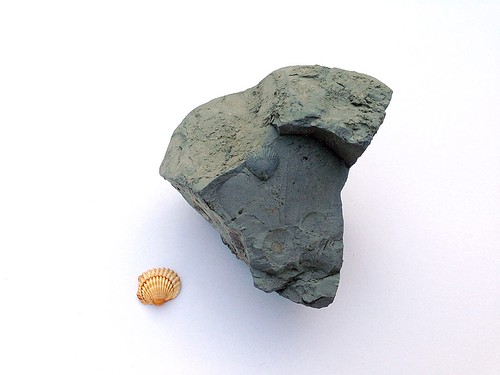 The object is a lump of soft grey rock. It is irregular in its appearance except for a small part about 1cm square, which is extremely regular in its form. The piece of rock is heavy and feels quite dense and sits comfortably in the palm of my hand. If I scratch the surface with my finger nail a mark is left behind. The texture of the piece of rock is rough but at the same time its softness makes it feel quite smooth to the touch. Part of its surface is smoother than that on the other side and it is on this side I can see the regular pattern of lines and a couple of other circular imprints. This smooth part of the rock feels softer than that on the outside – indeed there seems to be a distinction between an outside and an inside. The inside is defined in some respects by what looks like a cut. The ridge is about a centimetre deep and is irregular in shape, although it seems, compared with the other side, more regular.

The rock feels cool but not cold (as I write my observations outside in the garden, a breeze is blowing, turning the pages and agitating the protective wrappings in which I keep the rock). Looking carefully at the surface of the rock, on what I have called its outside, I can see small patches of grey which unlike the rather dull complexion of the rock are quite shiny, reflecting the light of the evening. The rock seems encrusted with crumbs of rock which it seems I could easily rub off with my thumb.

The rock has about nine surfaces or faces including the ridge mentioned earlier and the face on which you can find the form of the shell. Whereas the crumbs of rock and the lines, imprints and grey shining patches seem an integral part of the rock; the shell-like form seems (although it is made of the same thing) separate somehow. It is both the rock and something entirely different.

As the wind blows a little, everything moves it seems, save for the rock (and the table on which it is resting). It feels in my hand extremely fragile, as if should I drop it, it would break apart. Certainly I feel as if I could break pieces off with my bare hands.

Although to the eye there are faces of the rock which seem rough and those which seem much smoother, it feels nonetheless as I hold it in my hand the same texture all over. It has in some respects the look of a piece of bone (like a hip joint) or a worked piece of stone – an ancient tool for example.
As I write I can hear the odd shout in the street.

The piece of rock is a fossil found in a large piece of rock next to cliffs at Charmouth. The rock is dated to around 195 million years old. The whole of this piece of rock has therefore been part of an inside for a period of time that is unimaginable in my human brain. It was once part of the cliff and therefore one can imagine that it would have been under a great weight. Of course the piece of rock only became a piece of rock because the cliff face eroded. Then part of the face collapsed, a smaller piece was broken open and inside the shell was revealed. For much of its incredible life span then, it wouldn’t have been a piece but rather a whole. And, therefore, this piece wouldn’t have born the whole weight of the cliff upon its shoulders; this weight would have been distributed throughout the layer of which it was a part.

The shell would, like the rest of the rock, have been covered (surrounded by ‘other rocks’). It is the breaking open of it which gives it a sense of being ‘inside’. Imagining it surrounded by rock, a seamless expanse of rock, one does have a sense of darkness and a sense of weight – immense dark and immense weight. When I found it and broke it open, there was, suddenly the sense of lightness and indeed light, whereupon the pattern of the shell’s form was revealed for the first time in over 195 million years.

The light from the sun in the present day allows me to see the lines – the same sun that would have shined above the sea 195 million years ago.

This sense of an outside and an inside: the inside is hidden from view – invisible, and yet it exists. Looking at a cliff one sees colossal weight, density and reaching my eyes inside, I can picture only darkness. And yet, looking at this rock, one sees a form which is fragile, delicate, regular, light. The cliffs must be full of such tiny shapes – full of fragility; a delicate, lightness of touch. This mirrors the time before the rock was formed, when the shell was a living creature in the seas. One can imagine the light of the sun on the sea, the lightness of the creature – its fragility as it lived. There is a sense of the sea being light (in terms of sunlight and a lack of weight) and yet the sea is also impenetrably dark and heavier than the cliffs which we see today.

(The cliffs are little different then to the sea. They are not static, but are moving, slowly – too slow for our eyes until the second they slide.)

The shell would have been compressed on the sea floor over tens of thousands, hundreds of thousands, millions of years. Its outline, its shape, its ridges and perhaps its surface pattern were fixed as lines of incredible delicacy. The sea levels fell, the rocks shifted: huge, unimaginable forces, acting over vast, incomprehensible spaces of time – and yet this shape and these lines have remained. And all the while these lines have existed – this tiny shape has existed, whole epochs have come and gone – creatures have evolved ; whole species, including the dinosaurs have come and gone; the great mammals and so on. And finally man has evolved too. There is the sense that I’m looking only at the shell rather than the rock of which it is a part.

This lump of ‘unremarkable’ rock, shapeless, rough, grey, ugly, is just as ancient and incredible as the beautiful, perfect shell which is a small part of it.

Movement. Frozen.
The individual object which is not a part but a whole.
Air, light, water, colour condensed to make this soft, grey mass.
Delicacy of life translated into the delicacy of the small pattern on the rock’s surface.
(The light fades outside where I write and the shape of the shell begins to dissolve into the rock).
Movement of the shell. Movement of continents.
Movements of creatures, of time on an evolutionary scale. The weight of time which this patten of lines has withstood for 195 million years.
(What can humans withstand as individuals and as a species?)
(Colours begin to face into darkness).

Movement returned to the rock from the moment it was found and carried in my hand – carried into the garden this evening.
Movement of that creature, of everything that sank to the seabed, of the water above, whose weight pressed upon it – now becomes/joins with my own movement through time/this world.
The light that allows me to see the lines of the shell – its shape, eyes which would have evolved since that shell was in the sea.
The delicacy of light, of eyes.
Lightness. Weight. Pressure.
Light. Vision.
Lines.