The compost heap is some eight feet in circumference and about three feet high at its highest point. It comprises many different types of vegetative matter, at a glance; apples, the branches of the Christmas tree, twigs, cut-down shrubs, leaves and soil. There are numerous stones too, snail shells and new plants.

[a crow calls behind me]

The apples are in various states of decay, from ripe (and seemingly edible) down through papery brown to black. The black apples, split open, remind me of old leather shoes such as those you might find in a museum. 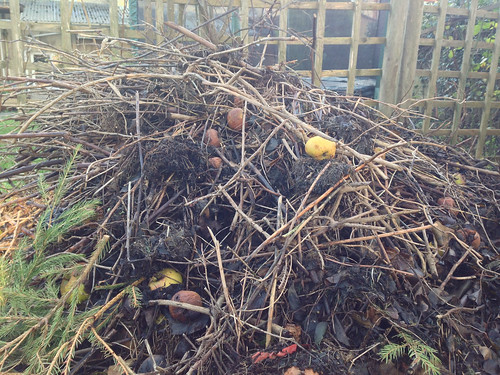 The sun catches the left-hand side of the heap [a blackbird is calling above the traffic]. There is also a piece of plastic – white and dirty. As I look more closely, I see a number of roots, rusty-brown in colour, stretching across the pile. The wind agitates some of the lighter twigs and the leaves which still cling to their branches. The colour of the leaves is pretty much uniform; brown to darker brown, and with all the dampness of the outer part of the pile – almost black., like the most decayed apples.

The crown of the compost heap is covered with lighter branches no more than a centimetre in diameter.
They stick out to the left of the heap like the spines / quills of a porcupine. Tangled within them are clumps of earth intermingled with dried grass – now the same shadow of brown as the branches. The colour of the heap, taken as a whole is the dark brown of those darkest leaves. (*From a distance of ten feet or so, the compost heap is a single entity onto which some things have fallen. It is predominantly a dark brown colour, but as one approaches, it forms fragments, as those things of which it’s comprised throw out their shapes towards my incoming eyes.)

A few yellowish-green apples prick it and from these the eye gravitates towards the browner types, wrinkled and spotted/flecked. One apple looks like it is made of paper, its skin depressed as if a thumb and forefinger has marked it so. 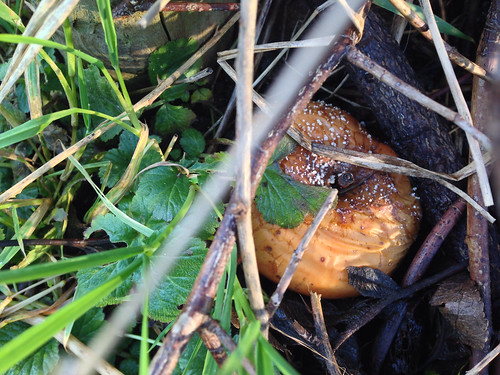 There is a definite boundary between where the compost heap begins/ends and the rest of the garden, but looking more closely that boundary isn’t as stark as grass and dandelion and other small plants start to encroach. Parts of the heap too have tumbled beyond this boundary.

Near my foot, a black apple has burst its skin and inside, its brown flesh looks like tapenade.

[The crow, sitting on a rooftop behind to my left is persistent in his calling. I can hear too the whistle of a wood pigeon’s wings.]

The compost heap although an entity in its own right comprises thousands of different things. A bright apple catches the sun and is made brighter sill.

Walking around I take up position to the left of where I’ve been. I can see a plastic straw – so at odds with the rest of the heap. A piece of flower pot seems however quite at home next to the apples – large and bruised, brown and putrid. There is a beautiful apple – a pale rust colour ridged and wrinkled, spotted with tiny white fungi. Above that, another rotting apple has abandoned its shape altogether and is now a dollop of brown, gooey flesh.

The core of the compost heap is more exposed here, and upon it, tiny green weeds have planted themselves.

[I have in my head the image of a star – perhaps because of the apples; their spherical shapes and the stages of their decay which go hand in hand – towards their implosion – with their different colours, ending at black, like black holes.]

Around the compost heap is the rest of the garden – the shed, the apple tree, the lawn and the cracked path, on which I am currently sitting.

I cannot smell the compost heap – at least not from where I’m sitting. I move closer and breathe in and see two decaying rose-hips each of which comprises a myriad number of colours and shades. I step around it. The branches crack beneath my feet like branches in a fire. I notice too the thorns snagging the air which agitates the hair-like splinters of some of the branches.

The compost heap makes no sound – at least not that I can hear. Without the breeze it would seem entirely still, a fact belied by its very appearance, vis a vis its changing parts.

Pine needles from the Christmas tree are caked in the mud, a small pool of water has collected inside a hollow eaten out of an apple. The apple behind it appears almost turquoise. Holes in others are perfectly round. The wrinkled skin of some of the apples appear almost like human skin – that of the old.
The perfect shape of the empty snail shell – the random shape of decay.

Looking at the papery brown apple, one imagines its flesh returning to fill the depressions in its skin. One imagines its skin colour changing as the apple itself grows bigger, becoming once again green like some of those around it. Freed of the mud gathered around it, it returns to the tree and begins to grow smaller in size until it becomes a blossom, then a bud on a branch in the summer. If it was left now (in its present state), it would over time reduce further still becoming just a collection of pips from which in time other trees would grow. 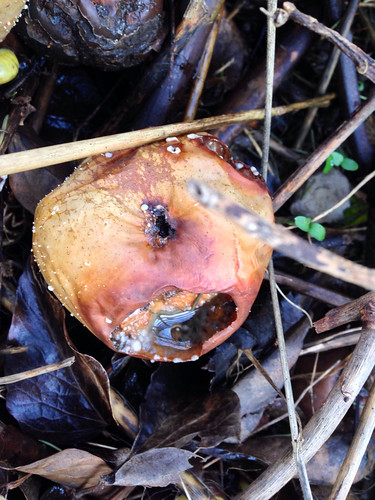 The branches of the Christmas tree once hung with decorations, bought from a shop, cut down in a forest or a managed plantation. How old was it? You can see the rings in the branches like ripples on a pond. They decrease to nothing, the tree folds itself away, takes refuge in the soil.
The empty snail shells would have their snails, the cut down branches would await the spring when they could surge with sap and grow.

But this compost heap isn’t dead. Nothing is dying here. When it was ‘fresh’ after I had finished gardening last year, it was four times the size. Some of it has been packed up and recycled, but much of it has reduced. There is still colour, even in the blackest apples. There is still shape, fragile like the snail shells.

Left to its own devices the heap would disappear entirely, but what would have disappeared exactly? In the end nothing truly disappears. Familiar shapes change.

The compost heap is never still and never silent, it changes by degrees which we cannot perceive, as with our own faces ageing in the mirror every day.

Feeding on itself.
It is what it consumes, its roots are the flows of energy released into the soil.
Colours are consumed.
It is blind. Deaf.
It feels. Drawing in to its core.
A star imploding.
All that will remain is the memory of its having been there.
It is for the most part invisible.
Just as it cannot see, we cannot truly see it, for it isn’t the shape of its composite parts – the apples, the branches, the clods of earth and pine needles. It is a flow – a slow progress of energy, released by colours, shapes to its heart, to the soil.
The compost heap is a pulse. It is the most un-dead thing in the garden.
It is a conduit.
It is slow, but far from dead.