I worked on a piece yesterday, the origins of which were a GPS trace of trench systems around the village of Serre. I had the idea of ‘colouring’ each segment using ash, graphite and coal dust, but of course the boundaries between these segments blurred into more or less one. However, I liked the look of what I’d produced, which reminded me – in particular where I’d made the lines visible using a palette knife – of aerial photographs I’d seen of the trenches.

The first image I produced: 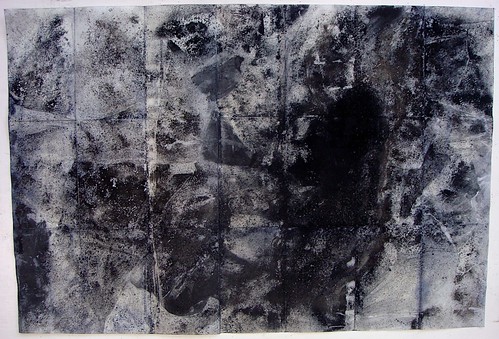 An aerial view of battlefields taken during the First World War: 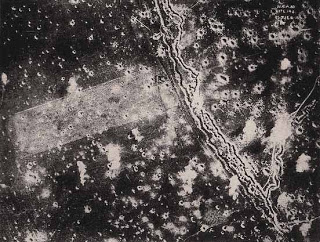 The coal dust is significant for me as it alludes to the miners who worked beneath the battlefields, as well as those miners who were called up for duty such as my own great-great-uncle, Jonah Rogers who was killed near Ypres in 1915.
What I’d like to do now, is do another piece, creating the same texture but only using the folds of the paper to create the lines (and perhaps the creases).