The following is a painting by Fred Roe (1864-1947) entitled The Eighth May which shows a scene from the Battle of Frezenberg Ridge, which took place on 8th May 1915 in what was to become known as the Second Battle of Ypres. My great-great-uncle, Jonah Rogers was killed that day near the farm depicted in the painting. 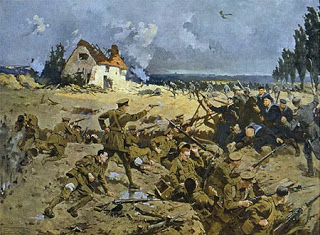 The painting is in the collection of Newport Museum and Art Gallery.