Today I started wallpapering the drawings I described in the previous entry to a wall in my studio in order to see how they would look and to see what techniques would be best for the installation at MAO. After a while, it became clear that the effect wasn’t quite what I was hoping for. I must admit I’d expected as much given that the drawings are all very similar – practically identical – being as they are, drawn on white A4 sheets of copy paper. 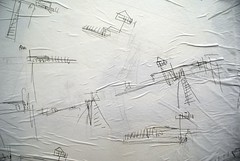 What I need to to is to create many more drawings (still including those on A4 sheets), drawn on different types/qualities of paper and of various sizes. I need to give the impression that this is the work of an obsessive mind to some degree, and therefore, the idea of scribbling drawings on whatever comes to hand would best be served by this change in approach.

Another thing to consider is the installation of the work itself. How might I create readymade wallpapered walls?

As it stands, there are things about the way the work looks that interest me. One things is the way it calls to mind the wallpaper one might find in a child’s bedroom; repeated motifs – the stuff of nightmares after dark, which, incidentally, ties in with a related project based around the story of Hansel and Gretel. 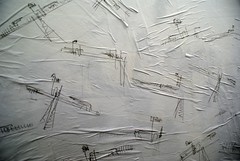 Talking of wallpaper has brought to mind an extract in Eric L. Santer’s book, ‘Of Creaturely Life, taken from Rainer Maria Rilke’s novel, ‘The Notebooks of Malte Laurids Brigge.’

“It was, so to speak, not the first wall of the existing house (as you would have supposed), but the last of the ones that were no longer there. You could see its inside. You could see, at its various stories, bedroom walls with wallpaper still sticking to them; and here and there a piece of floor or ceiling. Near these bedroom walls there remained, along the entire length of the outer wall, a dirty white space through which, in unspeakably nauseating, worm-soft digestive movements, the open, rust-spotted channel of the toilet pipe crawled. The gaslight jets had left dusty grey traces at the edges of the ceiling; they bent here and there, abruptly, ran along the walls, and plunged into the black, gaping holes that had been torn there. But the most unforgettable things were the walls themselves. The stubborn life of these rooms had not let itself be trampled out. It was still there; it clung to the nails that were left, stood on the narrow remnant of flooring, crouched under the corner beams where a bit of interior still remained. You could see it in the paint which it had changed, slowly, from year to year: blue into mouldy green, green into grey, yellow into a faded, rotting white. But it was also in the places that had been kept fresher behind mirrors, paintings, and wardrobes; for it had traced their outlines over and over, and had been with cobwebs and dust even in these hidden places, which were now laid bare. It was in every flayed strip of surface; it was in the dame blisters on the lower edges of the wallpaper; it fluttered in the torn-off shreds, and oozed from the foul stains which had appeared long before. And from these walls, once blue, green, and yellow, and now framed by the broken tracks of the demolished partitions, the air of these lives issued, the stubborn, sluggish, musty air which no wind had yet scattered. There the noons lingered, and the illnesses, and the exhalations, and the smoke of many years, and the sweat that trickles down from armpits and makes clothing heavy, and the stale breath of mouths, and the oily smell of sweltering feet. There the pungent odour of urine lingered, and the odour of soot, the grey odour of potatoes, and the heavy, sickening stench of rancid grease. The sweet smell of neglected infants lingered there, the smell of frightened schoolchildren, and the stuffiness from the beds of pubescent boys. And all the vapours that had risen from the street below, or fallen down from above with the filthy urban rain.”