I have just returned from a visit to Luxembourg to see my girlfriend, during which time we took a trip to Alsace. As per usual, I had little idea as to what I should expect of the place, but had heard that it was particularly pretty. The traffic jam on the approach to Metz didn’t bode well, but once we were past this we made our way at a good pace towards our first destination. However, before reaching it, we passed through the village of Molsheim (not so far from our ultimate destination of Colmar) and if ever there was a word to describe it then pretty would be it. The weather was a little overcast, but nevertheless, the village’s obvious picturesque charm shone through. 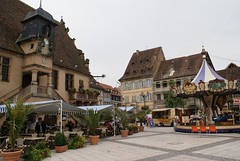 It was we thought rather like something from of a fairytale. One would have hardly been surprised if Shrek had passed by on the street, followed by Donkey and Puss in Boots.
We stayed long enough for a quick stroll, during which time I snapped several pictures, and made our way back to the car. In truth I thought it was a one off, but driving on, we soon discovered that every village was a similar, chocolate-box place; one might have expected to eat the houses, let alone take photos of them.

All this however was in stark contrast to our next stop.

Before making our way to Colmar, we took a detour on a meandering road which led us up into the Vosges mountains. The scenery was breathtaking. The clouds fell and trees rose like arrows to pierce them, whilst the drop at the side of the took one’s breath and cast it over the edges of the road. After a twisting ascent, we finally arrived at the concentration camp of Natzweiler-Struthof. 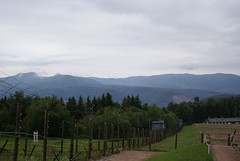 The following is taken from the guide:

“On 1st May 1941, the Nazis opened the KL-Natzweiler concentration camp in a place called Struthof. Nearly 52,000 people from all over Europe were deported to this camp or one of hits annexes. 22,000 of them never returned. On the 23rd Novemeber 1944, Allied Forces discovered the site, abandoned by the Nazis in September 1944.”

It was here that Hitler’s architect Albert Speer surveyed the area and recognised its rich resources of red granite. A camp was therefore established so that slave labourers could be used to work in the quarries. It also housed large numbers of so-called Night and Fog (Nacht Und Nebel) prisoners, so called because they disappeared as if into the night or the fog.

The camp itself is dominated by a large memorial to the many who died here, including many Poles and members of the French Resistance. And, although not a Death Camp per se, the two barracks at the bottom (two of the few which now remain intact) reeked of death and untold misery. Even here, amidst the natural splendour and beauty of the Vosges, there is a room with a hole in the ground to let the blood run through, a white tiled morturary slab and white painted windows, not so much to stop people looking out, but to prevent anyone looking in. 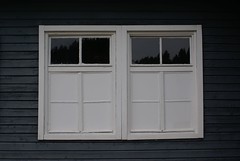 It’s strange how they appear gagged; prevented from talking rather than seeing, and taken with the camp’s isolation, they serve to reinforce the silence which hangs over the place like the clouds.
Whether it’s because of the camp’s comparatively small size (certainly compared with somewhere like Auschwitz-Birkenau or Majdanek) or the relatively ‘smaller’ death toll, again compared with somewhere like Auschwitz-Birkenau, the sense of the individual was particularly apparent here – or at least, the sense of ‘individual death’. Perhaps the location – the natural geography of the place – helped foster this feeling, primarily through the sheer size of the landscape by which the camp is surrounded. As a visitor, you feel isolated, you are aware of yourself, and the sheer scale and colour of distance. The blue mountains rising from the horizon like massive cardboard cutout waves in which you might drown; you might well shout but little would be heard, and yet, in just such terrain, echoes rebound; voices and anguished cries from the past, directed at the future of which we are a part.
As with all visits to places such as this (Auschwitz, Birkenau, Majdanek, Belzec) it is the leaving that is most affecting, walking through the gate to rejoin the real world, something which in the case of Natzweiler Struthof, 22,000 people were never able to do.

From Natzweiler-Struthof, we made our way to the town of Colmar, home to the artist (as I was later to discover) Martin Schongauer (1448-1491). It would be, I was told by Monika, like Molsheim, but bigger and she wasn’t wrong. Having arrived in the evening and checked into our hotel, we went for a brief stroll, with the main aim of finding somewhere to eat, which we did in a very attractive courtyard. 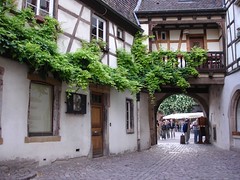 It was clear that this was a beautiful town, yet the next day, when the sun came out, it seemed to open itself like a flower, or as I thought at the time, like a knot, unpicked and unwound. And for several hours we followed this unravelling string of roads and lanes, amazed at every turn at just how pretty it was. Most towns (by no means all) have their more attractive quarters, a sprinkling of timber-framed houses leaning into the streets, peering circumspectively from the past into the present day, yet Colmar seemed to consist almost entirely of buildings such as these. There were of course the odd tower block and less elegant structures, but unlike other towns, where such buildings are in the majority, in Colmar they appeared very much in the minority. 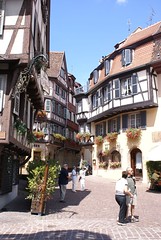 Having walked the streets, sat and sampled the local wine, we drove back towards Luxembourg, visiting the castle of Haut Koenigsbourg on the way. From a distance it does indeed look very impressive, perched on one of the wooded mountains, but up close you realise you’ve been fooled. It makes no apologies for the deception, and tourists, including ourselves still pay the 7 euros and wander through its make-believe rooms, hallways and chambers. It shares something with Colmar, that being the sense that neither would not look out of place in a fairytale. Colmar seems too good to be true, almost contrived, yet walking the streets you feel as if you are in the company of everyone who has ever lived there. They walk with the tourists, the streets they know so well, admiring the houses in which they once lived, telling each other what’s changed since that time. They listen to the stories told by the tour guides, pitting them against their own recollections. But in Haut-Koenigsbourg, we have nothing more than an elaborate film set. 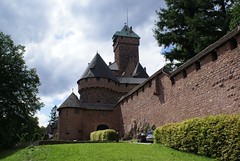 Built on top of the ruins of a genuine castle, the present day structure, constructed around 1905, is neither of the ancient past, or the past of a hundred years ago. It says nothing to us, not because it does not remember the past, but rather because it has none. It’s a mayfly, existing only for the day of your visit. It tells you nothing new, but simply echoes what you know already, expecting nonetheless that you might be impressed. Even the photographs displayed in some of its rooms seem phoney. As we left I was reminded of King Arthur in ‘Monty Python and the Holy Grail’, when after the Camelot song he says to his knights; “On second thoughts, let’s not go to Camelot. It is a silly place”. Our sentiments exactly.

Our visit was quick (at least it afforded spectacular views of the surrounding countryside) and from here we made our way back to Molsheim for dinner. Of course we arrived too early (dinner was at 6.30 and not a minute earlier) and so we enjoyed a drink and waited for the hour to arrive, which soon enough it did. 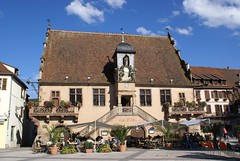 And on that hour (or demi-heure) people emerged to occupy the empty tables and chairs by which we were surrounded, as if an invisible signal had been given to which we were not privy. I was reminded of one of the children television shows of the late 60s and early 70s – Trumpton, Camberwick Green and Chigley. In Chigley, a whistle is blown at the end of the programme and all the workers in the factory, and all the town’s residents repair to the bandstand to hear the band. Somewhere in Molsheim, the whistle had been blown. We just couldn’t hear it.