Following on from my previous post on this subject (see Rogers Conundrum) I obtained today a copy of my great-grandmother’s birth certificate. 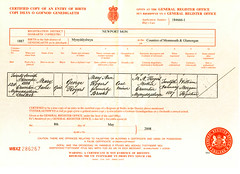 On the certificate, it clearly states that Mary Jane Rogers was born on 27th November, 1886 in Crumlin, Mynyddyslwyn; that her father was George Rogers and her motherMary Ann, formerly Brooks. Having Mary Ann’s maiden name is obviously a great help, but it just goes to show that censuses can be wrong.

Below is a detail of that census.

In this entry there are two errors; one the name of George’s spouse which should read Mary A and not Sarah A, and secondly the name of their daughter (my great-grandmother) Mary Jane which is given as Bessie J.

Having made the recent trip to Wales, I decided to try and get a bit further with a line on my family tree – that of my grandmother’s mother’s parents. My grandmother’s maternal grandparents were George and Mary Ann Rogers.

Although these dates aren’t all 100% accurate, they are for the most part within a year or two. I discovered them through a combination of the 1901 Welsh Census and a visit to the churchyard at Cefn-y-Crib, but what I want to know now is the maiden name of Mary Ann Rogers which I began to look for by searching for details of her marriage to George, narrowing my range between 1880 and the date of their first born. However, having located several possible entries for George Rogers I found that none of them tallied with anyone called Mary Ann; in fact, I could find no evidence at all for their marriage within this range.

I began to wonder whether (as was the case with my great great-grandfather Henry Jones) George Rogers was married twice. Perhaps this was the reason I could not find the dates I expected. I therefore noted down all the references for George Rogers and looked up all the female names which correlated. There were a fair few names one of which stood out as the most likely. This was a lady called Sarah Hiley who was married in Pontypool in the second quarter of 1885 to one of two possible grooms, one of which was a George Rogers. Given that his first child was born in 1886, this date seemed to lend credence to this theory.

It was then as I looked through the Wales Census of 1891 that I found the following entry along with the ages of those listed:

What struck me was of course the names, all of whom (except for Bessie and William (who died in 1897)) I’d found in the 1901 census albeit with a different mother. But what about my great grandmother Mary Jane? Having run through a number of permutations as to what might have caused her to be missing in the 1891 census (a search for her name revealed nothing) I suddenly realised that Bessie J Rogers, born around 1886 must be her; they were one and the same person.

George Rogers I believe was once married to a woman called Sarah and by 1891 they’d had four children together. By 1901, Sarah was, one presumes, dead, and George had married Mary Ann. Whether the other children were hers or Sarah’s I don’t know at this point. I decided to look for an entry for their marriage and eventually I found a possible wedding between a George Rogers and a Mary Ann Pritchard in the last quarter of 1894. What I haven’t been able to find however are any entries for Sarah Rogers’ death.

I have now ordered a wedding certificate for George Rogers and Sarah Hiley (if indeed they were married) and a birth certificate for my great grandmother Mary Jane. At least these should shed some light on what has become quite a mystery.