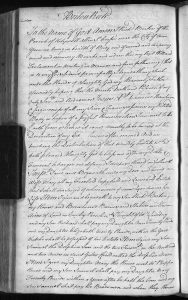 Transcript of Richard Borton’s will 1714.

In the name of God Amen I Richd Borton of the Parish of Holywell all is (?) St. Cross’s near the City of Oxon yeoman being in health of body and sound and disproving mind and memory do make and ordain this my last Will and Testament in writing in manner and form following (that is to say) first and principally I bequeath my soul unto the Hands of almighty God my Heavenly father assuredly hoping thro’ the merits Death and Passion of my only Saviour and Redeemer, Jesus Xt to receive remission and forgiveness of all my sins and and transgressions My retched[sic] body in hope of a joyful resurrection I commit to the Earth from whence it came decently to be buried at the direction of my Executors herein after named and as touching the distribution of that worldly estate which it hath pleased Almighty God to bless me after my debts and funeral charges are defray’d (illegible) as followeth ITEM I give and bequeath unto my dear and loving wife Mary all my Freehold, Copyhold and Leasehold Estate that I shall die (seized?) wheresoever ye same (illegible) during her life ITEM I give and bequeath to my son Richd Borton my House and Brewhouse Barnes[sic] and Stables and Eleven acres of land in Cowley Parish I bought of Mr Loveday and my Son Richard shall pay my Daughter Ann twenty pounds and my Daughter Elizabeth twenty pounds within the year that he shall be possessed of his estate ITEM I give my son Samuel the Dolphin Inn and the two tenements on the north side and two acres in Saint Giles field called the Dolphin Acres ITEM I give my Daughter Mary the House next Mr Phipps house and my son Samuel shall pay my Daughter Mary twenty pounds within a year after he hath the Inn and my son Samuel shall pay the Beedsman and when they renew to the city Mary on her heirs or assigns shall pay according to that income ITEM I give to my Daughter Ann my house in St. Clement’s with the forest(?) money belonging to it ITEM I give my Daughter Elizabeth my House and Barn and Smiths shop and Garden over against my Brewhouse ITEM I give my daughter Martha my six acres of land in Headington Field with the Cottages Commons belonging to them and a clove(?) at Cowley now called the Hop Yard on (illegible) and if my son Richard will not surrender the six acres and the house as I have directed ye he shall pay my daughter Ann seven score pounds more than I have directed before and my Daughter Martha fourscore pounds if he doth not (illegible) to her. I leave my Ash house which now stands where the dog kennell[sic] formerly stood to my wife to be disposed of either in the payment of debts or otherwise as she shall think convenient and if it shall please God if any one of my children die before they come to possession of what I leave herein by my will allotted to (them?) then shall they share or (illegible) or Estates belonging or by my will so given and bequeathed  to him or her so dying be divided equally to the rest of them that shall be the survivors. And my loving wife shall enjoy all my Estate so bequeathed unto her during the term of her life if she lives a widow but if she marry then each and every one of my children shall enter upon and take possession of what I have herein by my will bequeathed unto them so soon as she shall marry and if my stock that I leave behind me do not prove sufficient to pay and discharge what debts I owe at the time of my Death and my Funeral charges then shall every one of my children bear a proportionable charge according to what I have hereby given to them of the payment and the discharge of the same and so the intent that this may be known to be my last will and testament revoking hereby all former wills whatsoever by me made I have hereunto set my hand and seal this Seventeenth day of December in the year of our Lord One thousand seven hundred and fourteen Richard Borton signed sealed and attested to be the last will and testament of the above named Richd Borton in the presence of us who have signed the same in his presence when he sealed and signed it Mary Gardner, Tom (illegible), Tho. Cave

Having discovered that my 6 x great-grandfather Samuel Borton owned The Dolphin Inn (which stood on St. Giles, Oxford), I was pleased today to discover his and his father’s wills. Samuel was born in 1706 and died in Oxford in 1769, leaving behind a fair few houses and bits of lands to be divided up amongst his children.

The image below shows his original will: 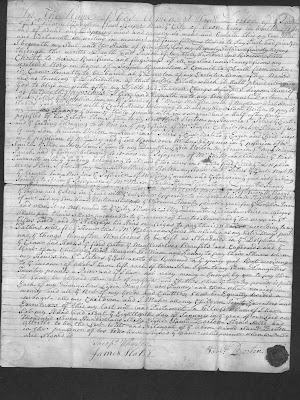 I was pleased to read the following which confirmed my previous research:

“I bequeath unto my son Samuel Borton my house called ye Dolphin Inn in the parish of St. Mary Magdalen with ye Brewhouse, Washhouse, Stables and Gardings with Coach House belonging to it.”

I was surprised at how many properties he owned in the city including a house in “St. Peters ye East next to ye Eagle and Child”; another house in St. Mary Magdalen which he bequeathed (along with two acres in St. Giles’ fields called Dolphin Acres) to my 5 x great-grandmother Lydia Stevens. He also owned a house next to the Angel Inn on the High Street (pictured below in 1820). 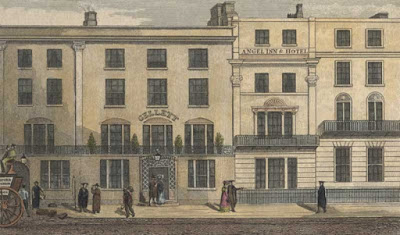 When I examined the will of his father Richard, who died in Oxford in 1714, I found that the same properties were listed in his will and that he had himself owned the Dolphin Inn. The first page of his registered will can found below: 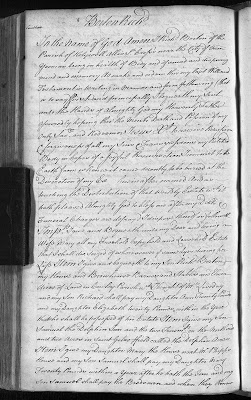 But what I was particularly thrilled to see was an example of Samuel’s handwriting in the form of his signature.

I remember how delighted I was when I discovered my 6 x great-grandfather Samuel Borton who ran the Dolphin Inn, Oxford, sometime during the 18th century. I felt a connection with him and, perhaps more importantly to the site of the inn he ran.

Then I discovered his father, Richard, who died (possibly in Holywell, Oxford where Samuel was born) in December 1714 when Samuel was just 8 years old. Imagining this man as a relative, as one might think of one’s grandparents or great-grandparents (if one was lucky enough to know them), I had to remind myself recently, that Richard Borton was just one of 512 people alive at the turn of the 17th and 18th centuries from whom I’m directly descended.

To think of it another way. Imagine that in the year 2315, my direct descendent is born, then there are 511 people – including, of course, my wife – alive today who will also play a direct part in that person’s birth.

The Dolphin Inn (now demolished), which was run by my 6 x great-grandfather Samuel Stevens between (at least) 1734-1772. The photograph of the inn was taken some time around 1870; the modern photograph on my way to work today. 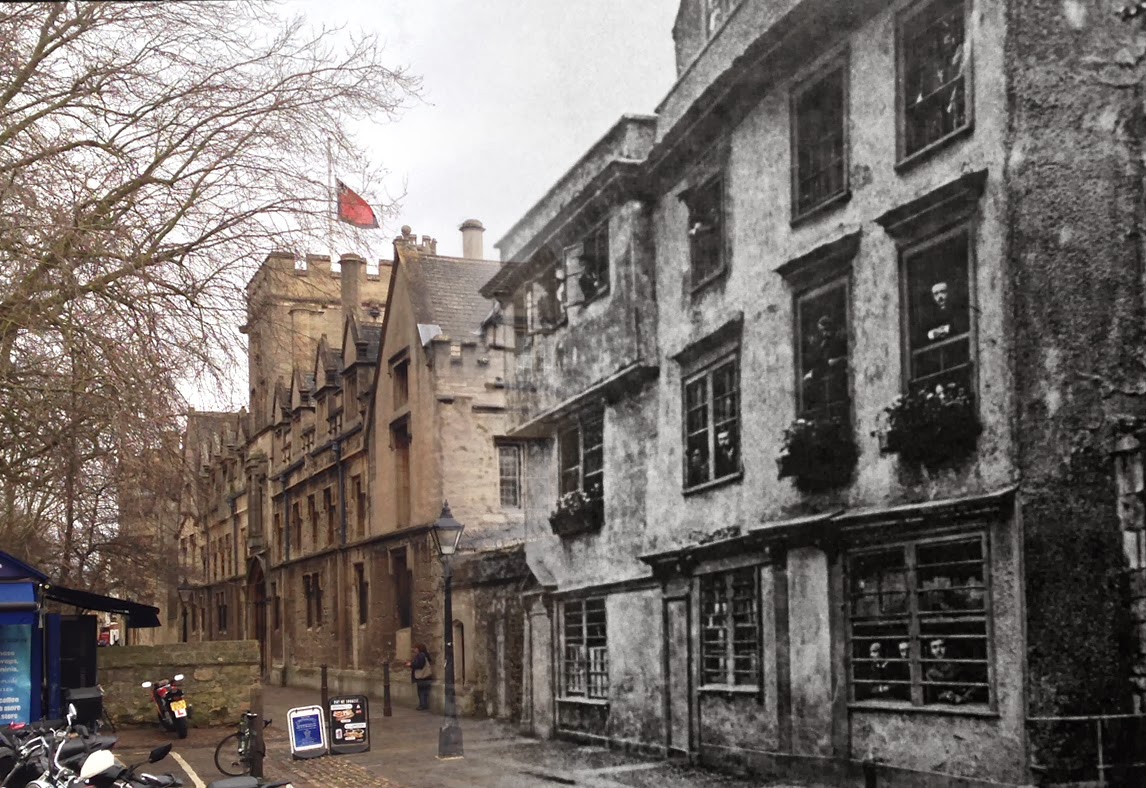 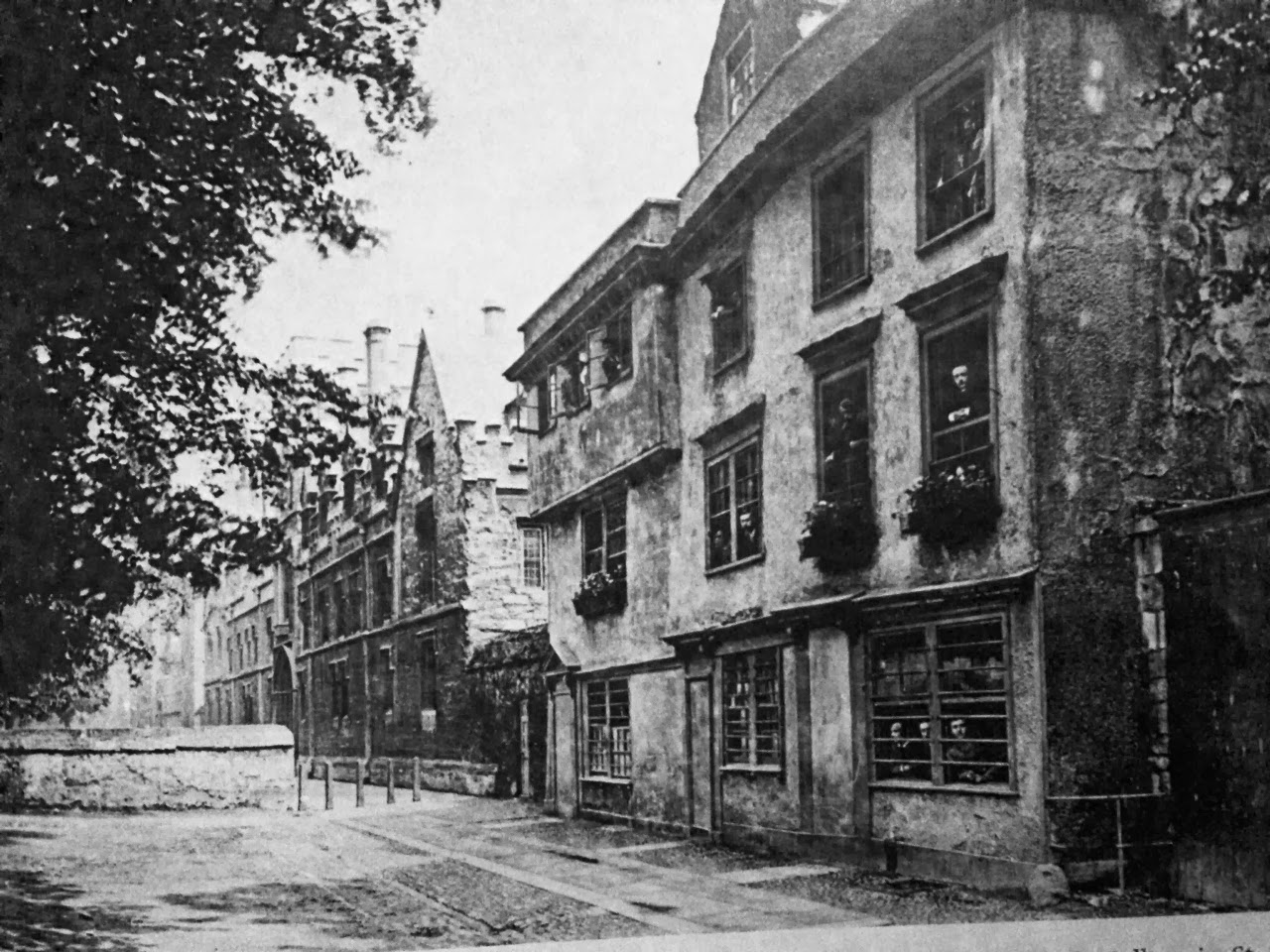 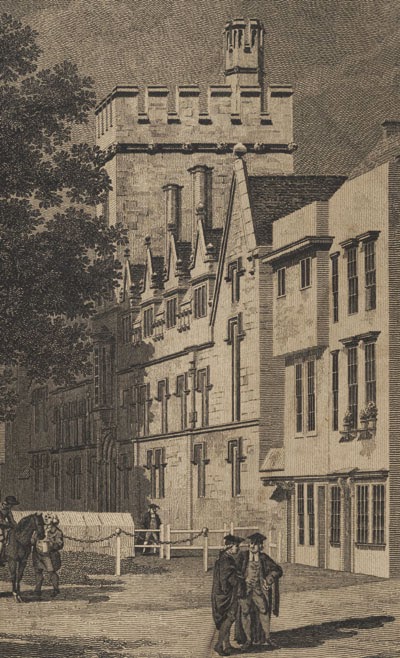 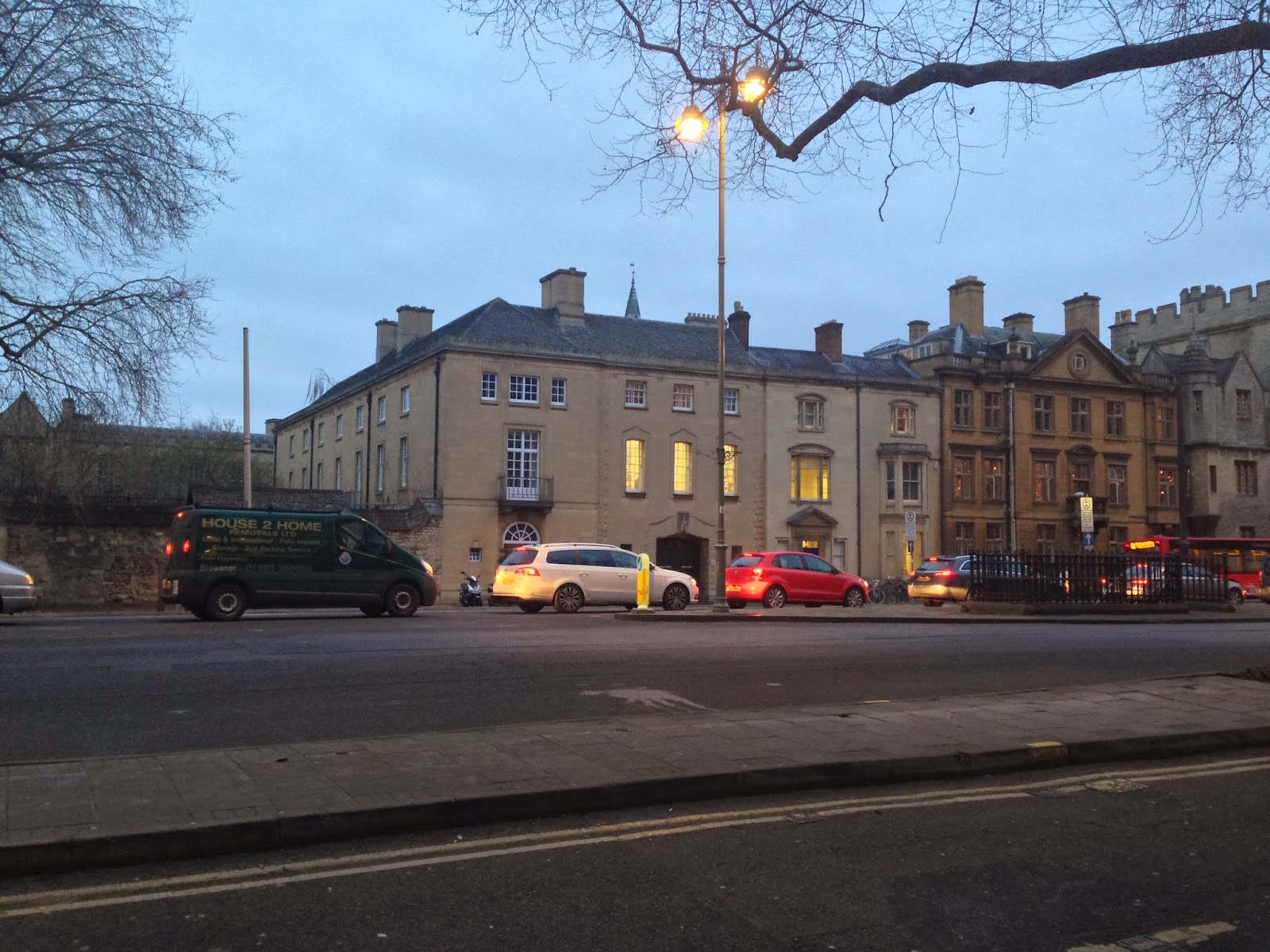 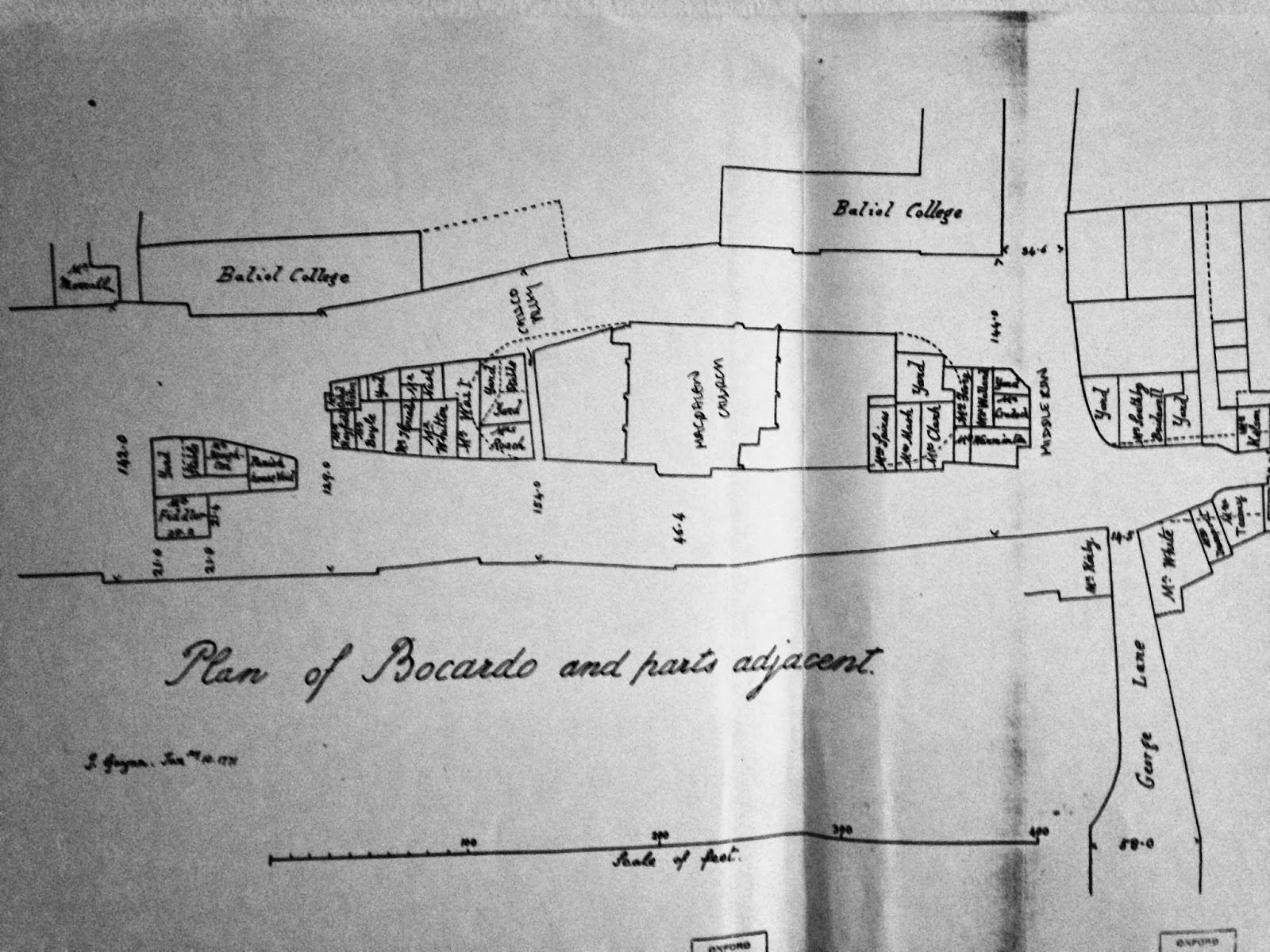 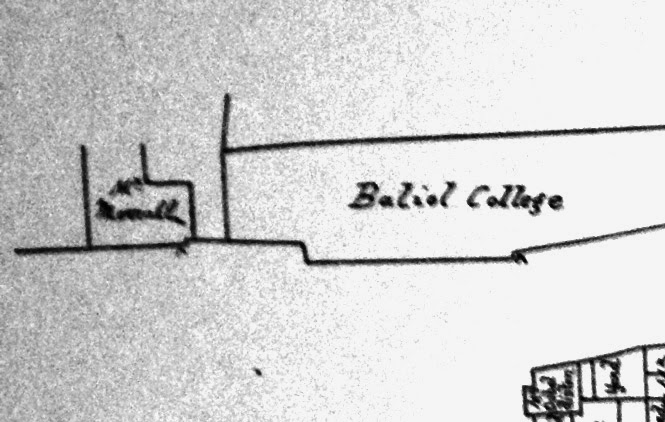 I have recently written about John Gwynn’s survey of Oxford (1772) in relation to my family tree research (see Lydia Stevens 1734-1822) and have discovered another ancestor in the same survey. Lydia’s father, Samuel Borton was, at the time of her birth, an innkeeper in Mary Magdalen Parish. Lydia married John Stevens in the church of St. Mary Magdalen in 1764, and I wondered therefore whether Samuel Borton would be listed in Gwynn’s survey? Sure enough, in Magdalen parish, close to Balliol College, a Mr. Borton is listed as the owner of a property measuring 15 yards wide.

I need to get a copy of H.E. Salter’s Survey of Oxford in 1772 with Maps and Plans to work out where exactly this is (the above extract is from Google books). However, it might be that as we have [Here Broad St.] and given that the length of Balliol College is given as 140 yards (128 metres), that Mr. Borton’s property is on the north side Broad Street. But then Balliol College, west end would seem to be that part of the college shown in yellow below. In which case Mr. Borton’s property would actually be nearer St. Giles. 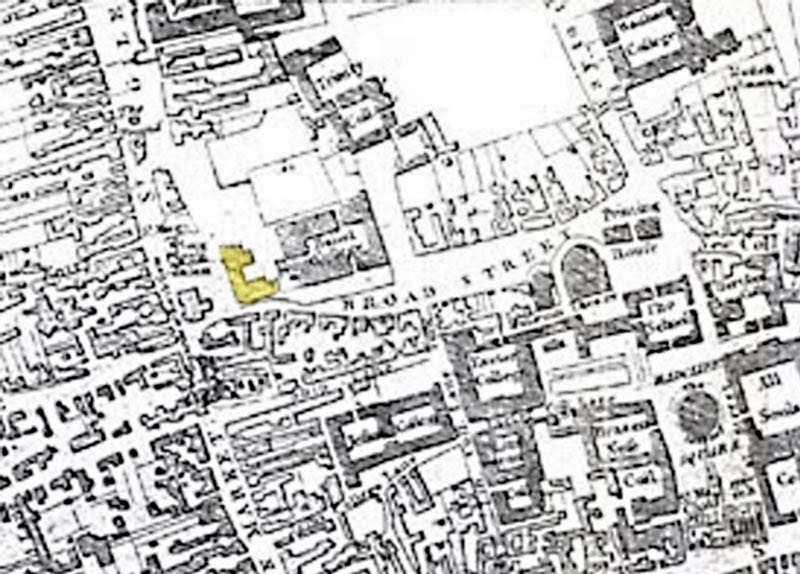 Having looked up Broad Street in Google Earth, I decided to use the measuring tool to see if that would help. The yellow lines are both approximately 140 yards long. 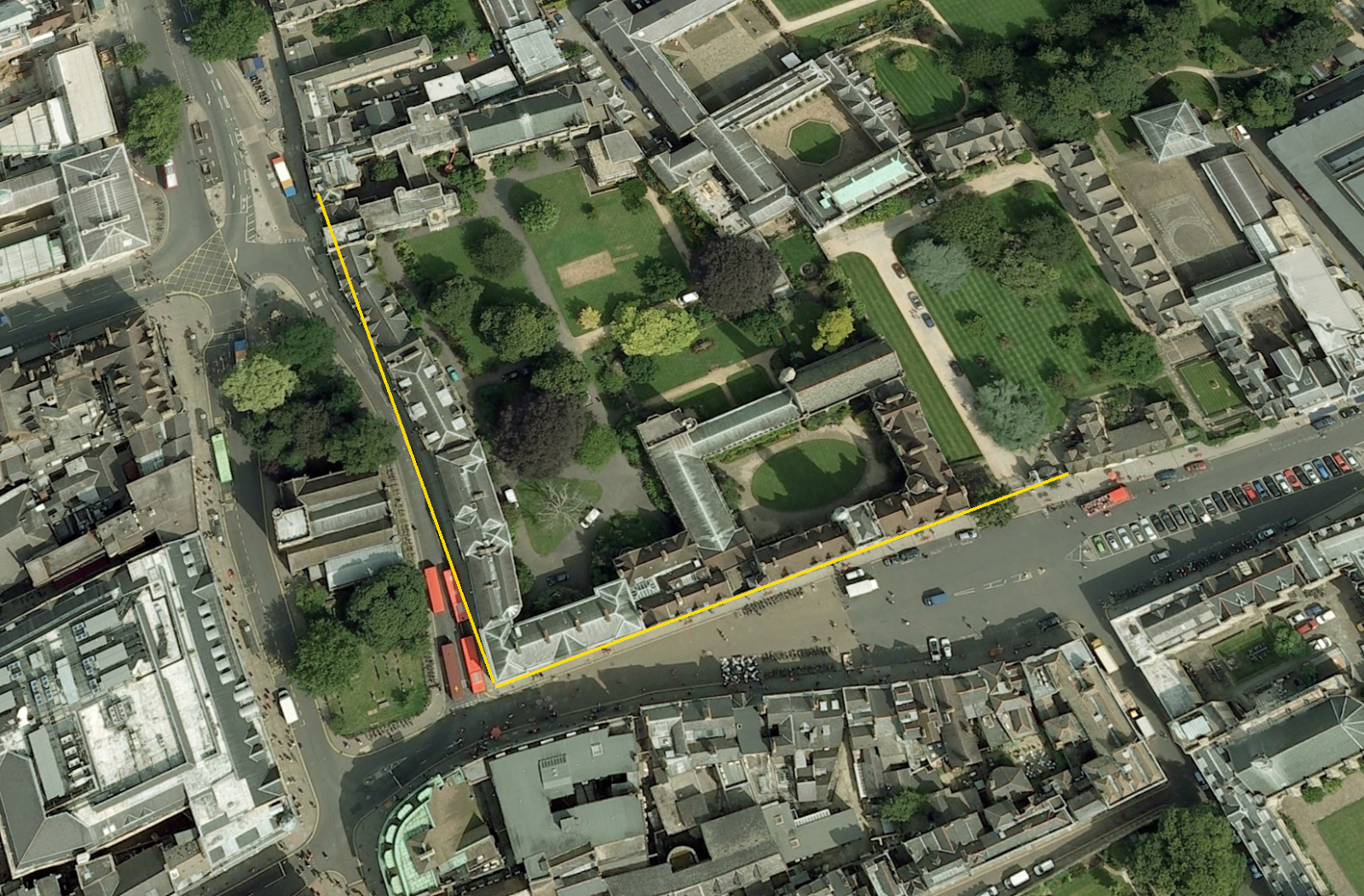 Superimposing the 1750 map above onto Google Earth, we get the following: 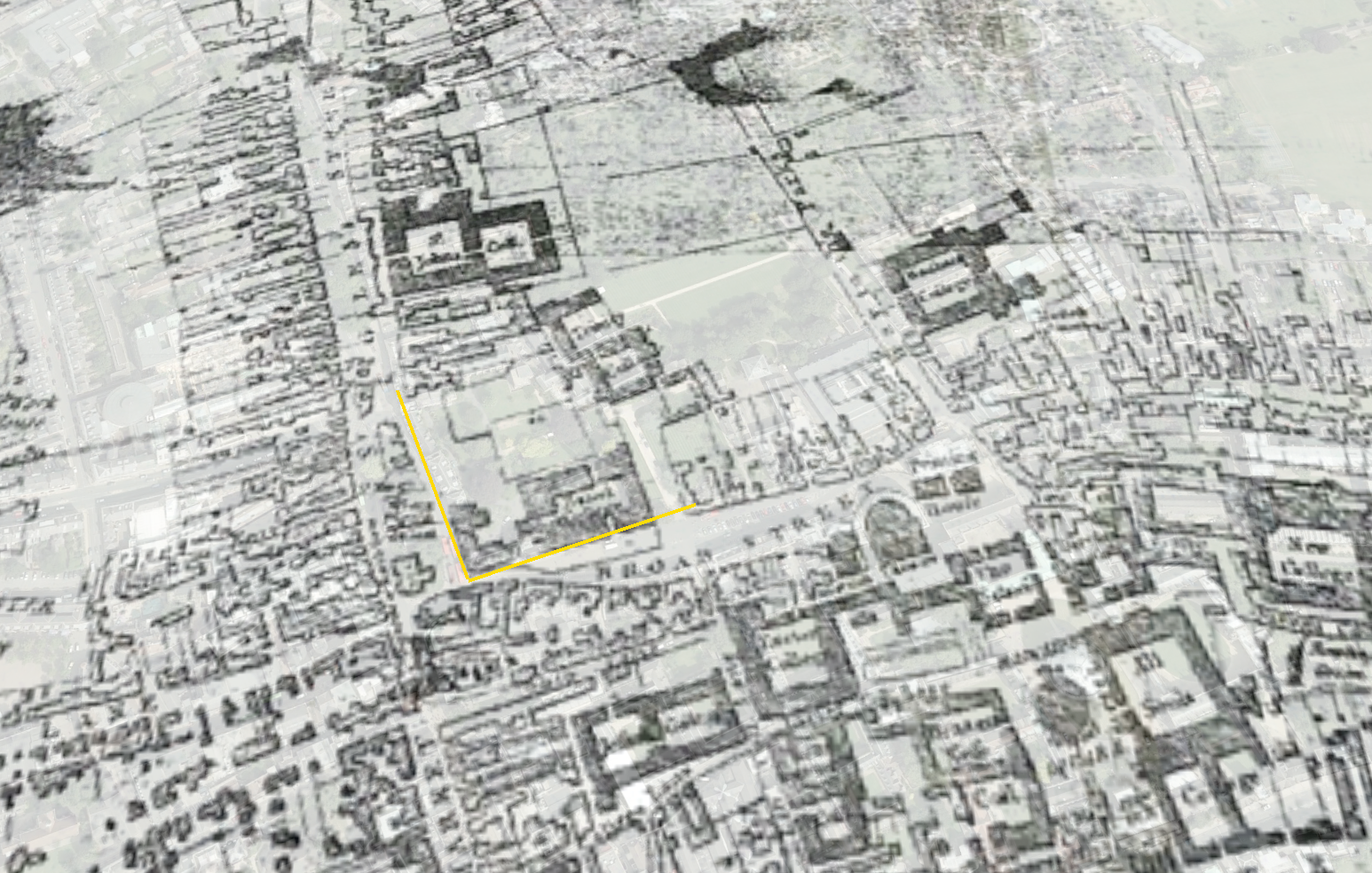 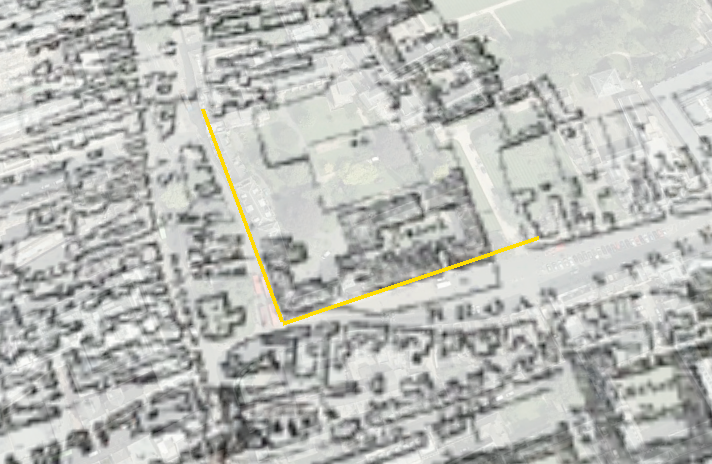 During a quick research session in the library this lunchtime, I tried to discover the birth date of my 6 x great-grandfather, Samuel Borton. Having trawled through the indexes for St. Martin’s parish, St. Mary Magdalen, St. Peter le Bailey and St. Mary the Virgin, I turned to that for Holywell parish. In there I discovered a Samuel Borton born in 1706. His father was listed as Richard and in the time I had, I discovered two siblings called Ann (b.1693) and Mary (b.1703).

From the index it’s hard to say for sure that this Richard Borton is the father of my Samuel Borton, but the name isn’t common and, in line with what I described yesterday, another piece of evidence could be gleaned from the names of Samuel’s own children.