Yesterday I carried on with the process I initiated two weeks ago, that of burying an engraved plate, leaving it a week and then printing the rusted version. Having dug up the plate after a second period in the ground, I was pleased with the resulting pattern of rust which I hoped would be lifted onto the paper by some of the ink during the printing process. 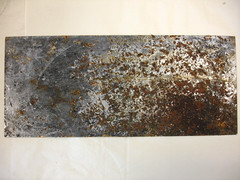 The resulting print from this plate was as follows. 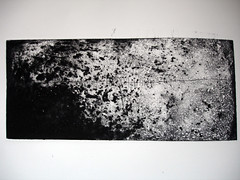 The thing I realised with printing from such a rusted plate was the fact that the rust has quite a pull on the ink, and so once the paper has been through the press and one lifts it from the plate, it has a tendency to be left behind. With the print above, I was somewhat disappointed that the rust was ‘drowned out’ by the ink – hardly surprising when I think how thickly it was applied. Of course this is normal, but whereas one can use the scrim to take the ink off, and use quite a bit of pressure to do so, with the rust one doesn’t want to rub so much (and thereby remove it) and so the ink remains too thick in these areas.

I took a second print of the plate without re-inking and and the texture of the rust was well preserved. 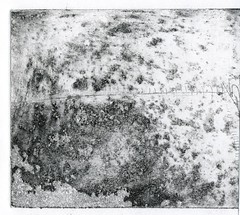 For the next print (after a third week in the ground the plate will be even rustier) I need to ink the particularly rusted sections less and perhaps moisten the rust to encourage it to lift off the plate.
As well as continuing this experiment, I also started working with photo-polymer plates. A photograph is printed onto acetate (with all black areas ‘removed’/greyed) and this positive is then used to ‘etch’ the plate. The plate is sensitive to UV light and so this is done in a darkroom in a UV box. The light passes through the acetate and exposes the plate in the darker areas. When the plate is washed and inked, these areas then take the ink which is then printed onto the page.

In order to get a good print, one needs to make two or three proofs, the results of which are below (those on the left being the first). 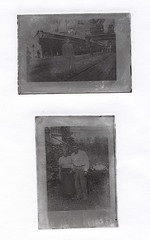 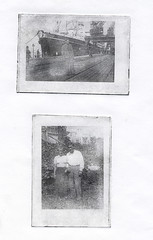 The question I have to ask myself now is what does it mean to print these photographs as etchings? Something to consider over the next few days.