Yesterday, prior to meeting a friend, I paid a quick visit to the National Gallery, a place of which I can never tire (just the fact one can enter as freely as one enters a shop never ceases to amaze me). I had little time, around 15-20 minutes and so I headed towards the 18th century, and as I walked I saw a sign pointing the way to Venice. Having not long returned from the city, I made my way in that direction, checking my watch to keep an eye on the time and quickly found myself there again, in the mind of a certain Canaletto. Of course, I am familiar with Canaletto and his great views of the Grand Canal, but it was, as always a pleasure to see them again. And with Venice still fresh in my memory, wet like paint, I found the canvases teaming with life; the blue two centuries old sky which I had seen just two weeks ago, the turquoise canals and the buildings, which always put me in mind of old yet elegant widows. Yet, it was two smaller works which I found the most appealing. Firstly, ‘Venice: Piazza San Marco and the Colonnade of the Procuratie Nuove’ painted in about 1756, and secondly ‘Venice: Piazza San Marco,’ painted again around 1756.

I paid little attention to the dates (I didn’t have much time as I said), but recognised there was something melancholic about these works when compared with others I could see (such as the Regatta on the Grand Canal).

In my mind, I can still hear Venice, I can hear the sounds of these very colonades, I can feel the lapping shadows, and when I look at the paintings above, those sounds (the murmuring voices, the footsteps chipping at the ground) become those of the people in the paintings, of men, women and children who have been dead for two centuries. One can almost imagine, the man in the green cape holding his coffee (‘Venice: Piazza San Marco’) still standing there now, listening in on the conversations of the living, quite unaware of the passing of time, of the passing of his own life. 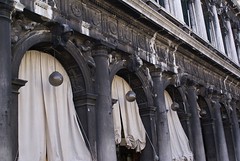 And it is interesting, and indeed appropriate, that not far from the place painted by Canaletto in these two late works, Bill Viola’s meditation on life and death was installed in the Chiesa di San Gallo. This work, with its use of water as a ‘dividing line’ between life and death has no more appropriate place to he shown than Venice, and the more I think about the city, the more I see it as a place where life and death coexist; indeed, the very symbol of Venice, the Gondolier has a role to play. Amongst the crowds thronging the Riva Degli Schiavoni, who’s to say the dead don’t stand amidst the tourists – the man with his coffee cup – awaiting the Gondoliers who will ferry them to the next place. Perhaps it is the city’s almost supernatural existence, which lends the place this other-worldly air. As Paul Morand writes in somewhat unconventional biography, ‘Venices’:

” Venice did not withstand Attila, Bonaparte, the Hapsburgs, or Eisenhower; she had something more important to do: survive; they believed they were building upon rock; she sided with the poets and decided to be built on water… Within her restricted space, Venice, situated as she is in the middle of nowhere, between the foetal waters and those of the Styx encapsulates my journey on earth…”