A year or so ago, I started work on a piece of work based around John Gwynn’s survey of 1772. The piece was called (as a working title) ‘6 Yards 0 Feet 6 inches’ based on the measurement of John Malchair‘s home in Broad Street. Having discovered an ancestor – John Stevens – born in the city in 1811, I wondered if there was any chance that one of the Mr Stevens’ listed on the survey was an ancestor of mine? It seemed a long shot but after today’s research I’m rather more optimistic.

If I did have an ancestor in Oxford at the time of the survey and if my research is correct, then that ancestor would be John Steven, the grandfather of the one previously mentioned. I’ve no idea when he was born but I do know that he was married in 1764 and is described as coming from St. Martin’s Parish, where his son Samuel, John Jr’s father was baptised in 1776. One could assume therefore that I did indeed have ancestors living in the parish of St. Martin’s at the time of the survey.
The images below are taken from the survey and show two Stevens one of which might well be my ancestor.

Gwynn fails to include (at least on the copy I have) first names from the survey but within the parish of St Martin’s two Mr Stevens are recorded along with a Mrs Stevens. One can assume however, that those most likely to be mine are the two Mr Stevens mentioned as living in the parish, one in Butcherrow (now Queen Street), the other in North Gate Street (now Cornmarket). The residence in Butcherrow is 7 yards 0 feet and 6 inches. That in North Gate Street is 4 yards 2 feet 0 inches. 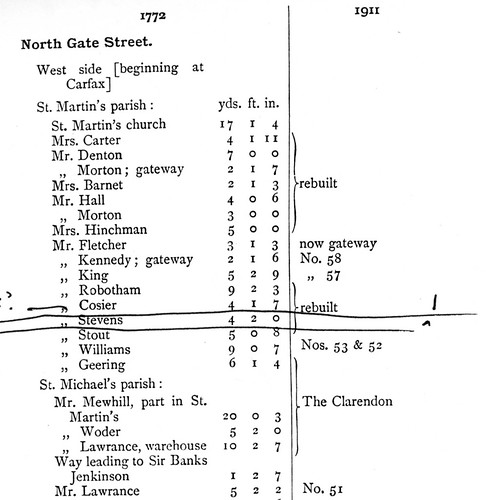 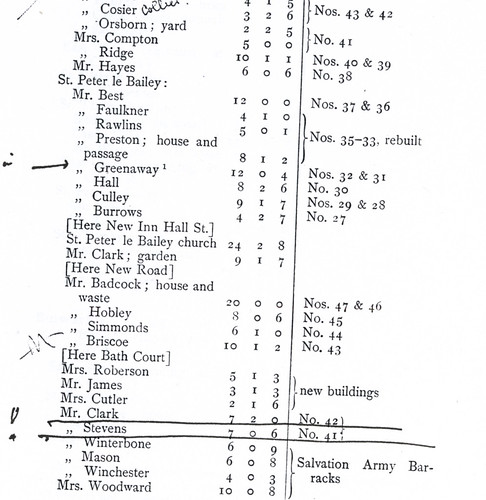 Of course more work is required to see if one of these is indeed my ancestor, but I must admit to being very inspired by the prospect.