Today I made what one might term an ‘intervention’ in the Larkin Room of St. John’s College as part of the Travel and Trauma Colloquium which is being held there today and tomorrow. The work has been written across two large glass doors and throughout the day I’ve been reflecting on its meaning in light of answers I have given to questions posed by delegates and also in light of the papers delivered as part of the colloquium. 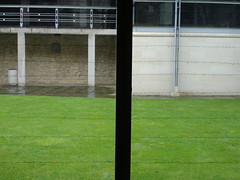 When I started to create the work in the morning, the weather was beautiful; blue sky, sun – a perfect Spring morning. Yet very quickly the day changed and as I was writing about the bad weather on 26th March (that being the day on which I wrote the text: see Work in Progress – The Gate) so the heavens opened and the rain (and hail) began to fall. And at once I began to think about the weather and history (as you do). History (with a capital ‘H’) is of course full of accounts of bad weather (storms, droughts and so on) but what one doesn’t read (for perfectly understandable reasons) is accounts of average or day-to-day weather conditions in relation to less than average events. There are of course numerous historical exceptions to this, such as in the diaries of Samuel Pepys whose accounts of the weather serve to bring the seventeenth century alive, but as the rain fell, just as it had over two weeks ago, I began to wonder what the weather was like at times of less than average – great – historical events. In my text I wrote:

“It’s stopped. The rain, but all around, the colours are by a few degrees darker.”

And I wondered, how were colours similarly changed in the past?
I was talking with a delegate about how it is such small things which tell us the most about the past, and knowing how the weather was on certain notable days in history would help paint a better picture of the past. There isn’t much weather in history, some yes, but there should be more! Anyway I digress… suffice to say, what the similarity in the weather showed me, was how from year to year, century to century, rain is always rain, sun is always sun. They both come and go along with fog and snow. They help fill in the outlines of facts with colour (the outlines in my case were the words I was writing). 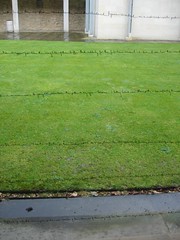 Going back a moment, to Wednesday when I typed up the transcript (the text of what I had written on 26th March) I found the version I was typing was almost a dreamlike replica of the actual event. It was very different to remembering the event, for the remembered event doesn’t follow the same temporal pattern as the memory inspired by the typed text. The memory (not that inspired by the text) of that time is limited to a few images which blur and blend together to create an homogenous view of the hour I spent in the Larkin Room; on remembering it, I have by no means the sense of any linear time. Writing it out word for word however was like re-living that moment, but time was changed to the time it took me to type it up again; the hour became more like two – but it was linear all the same.

After a few of the speakers had delivered their papers I began to consider what I could see as a connection between tourism and history. One of the questions raised in the colloquium was why we are tourists? (The question emerged from a discussion about 19th century tourists but it still holds today) What are we doing when we visit other places? One of the answers which emerged was that we are somehow comparing the places we are visiting with that from which we’re from, usually unfavourably. We go away in order to return grateful for what we have, we travel, in part, to confirm that where we live is better. Of course this by no means universal – far from it, but travel often augments are sense of home.

As I wrote in my introduction to the project, for me, it’s the individual tourist’s resolution of a disquiet resulting from a shift in the status of a place – the act of leaving or being able to leave – which in some respects makes such places popular today (heightening as they do our sense of existence, of life).” Just as we return from our holidays with a heightened sense of home, so we return from the camps with a heightened sense of life.

We are I believe, in History, tourists of the past. History is a place, a foreign country which we can visit and leave. It goes without saying that those in the past cannot. When we write or read about the past, we are making our own barbed-wire fence to keep the past in. We look as Wiesel says but go no further. We observe but cannot participate, we see from a distance. The barbed wire keeps us out just as it keeps the past in. But as I have written lately in regard to another project (Umbilical Light), to read history, to know it properly – to understand it – necessitates our own non-existence, we have to tear down the wire and enter the past into which we must then dissolve like smoke in a grey sky. The text of history books is therefore an armature by which we are shaped, it makes us the living and those behind the dead. But what about the not-yet-born? Are they also to be found behind the text, or like the dead within the words itself? As I have already written, “to know it properly necessitates our own non-existence” and in our conscious minds that becomes the very image of death. Does that not mean therefore that we exist amongst them? 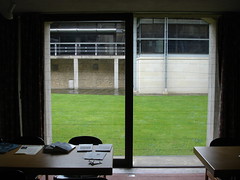 As one can see, the creation of this work today in the context of the colloquium has thrown up many more questions. But to summarise… the historical text in respect to trauma acts as a fence to keep that trauma at bay, we can read of the trauma in words and glimpse a world behind them, but as when one reads the words on the window, we cannot see the world very clearly. If we focus on the world behind, we lose sight of the text, of the past. Standing in Auschwitz-Birkenau I could of course see the world as it is now, but the words I had read seemed vague, I could not correlate the two – my mind simply couldn’t conceive it. And now, when I return to the words, my memory of the place in which I’d stood is vague, as vague perhaps as the images I have of the past and all its traumatic events. I have gone to the gate but no further.