I’ve just returned from another fantastic trip to Poland, this time taking in the east of the country through Lublin, Zamosc and the very picturesque Kazimierz Dolny. My girlfriend negotiated the less-than-brilliant Polish roads whilst I sat in the passenger seat armed with my GPS creating a record of the route. The weather was wonderful, over 30 degrees every day and very sunny.

One of the reasons for the trip, aside from it being a holiday, was to visit two more Holocaust sites, these being the concentration camp at Majdanek and the death camp at Belzec. Having left Warsaw we made our way down to Lublin and on arrival, went to the Majdanek concentration camp, just on the outskirts of the city. I didn’t know much about this camp and even after reading a little about its history I didn’t expect what we found there. It is one of the best preserved camps in the country and in some respects is like a smaller version of Auschwitz and Birkenau in one. Like Auschwitz it has numerous exhibitions in each of the barracks, including piles and piles of old shoes. Yet whereas in Auschwitz these were held behind glass, here in Majdanek they are stored in cages; one can smell them.
The gas chambers are still intact here along with the original washrooms, and walking through these was, as one would expect, particularly poignant. We noticed on the walls and ceilings of the chamber, that there were patches of blue. I assumed this was just mould caused by damp, but on returning home, I’ve since discovered these patches were caused by the residue of the Zyklon B gas. Indeed, one can see how dense the colours are on the ground and almost see the residue pale as it climbs the walls. 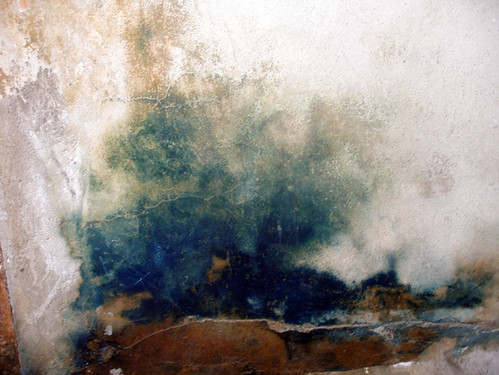 Colours have become a point of interest for me in my work. As above, the blueish tones on the grey walls were striking, not only because of their colour, but because of what they signified. The same was true in the barracks full of shoes. Amidst the rows of earth-brown shoes, one could occasionally glimpse a patch of colour, a red shoe (below) or a blue one. 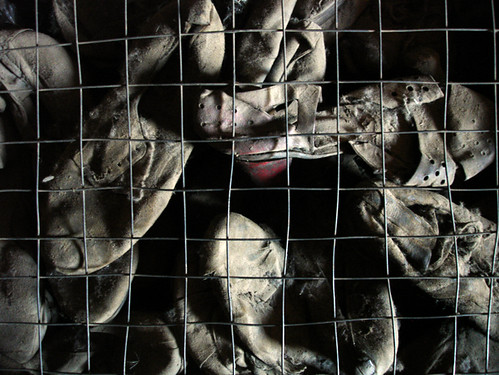 Another striking part of the camp was the memorial containing a mound of ash; the cremated remains of the camp’s thousands of victims. It’s hard to imagine this mass of ash was once a mass of people. 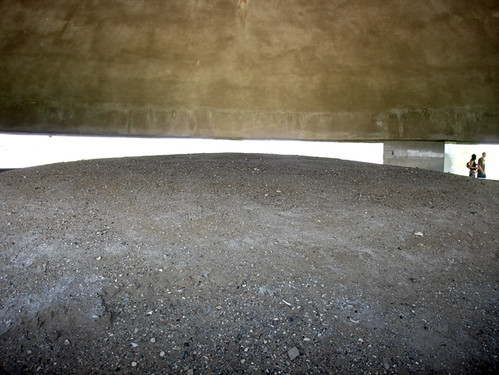 Lublin itself was very interesting. The city has a wonderful old town which more than hints at its original splendor. Sadly, some of the old houses are in a terrible state and one was left wondering whether they would survive.

Having spent the evening in the city, we had an good breakfast and made our way to Zamosc, a sixteenth century version of Milton Keynes, founded by Jan Zamoyski and built from scratch by the Italian architect Bernardo Morando in 1580. However, before sampling its various delights, we visited the second Holocaust site on our itinerary – the site of Belzec Death Camp.

Driving through the village of Belzec, it was hard to tell exactly where the camp was; to be honest, neither of us knew quite what to expect. And whereas before, in the camp at Majdanek we found patches of colour in amidst the piles of shoes, so here in Belzec, as we drove down the road, we saw a shadow in amidst the countryside; a charcoal scar like a field ravaged by fire. This was it, and it took our breaths away. 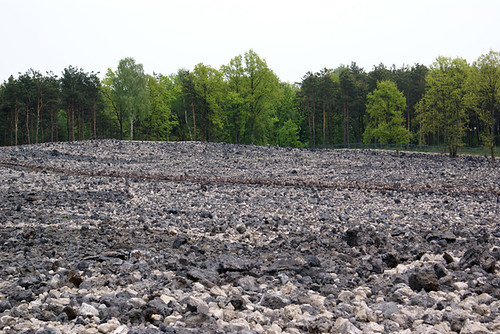 Whereas the proximity of Majdanek to the centre of Lublin was shocking, here at Belzec, what was shocking was its size. Measuring just 275 metres on three of its sides and 265 on the other, this small space witnessed the deaths of around half a million people, all in the space of nine terrible months. But unlike camps such as Majdanek, Auschwitz and Auschwitz-Birkenau, nothing of this camp (which was liquidated by the Germans in December 1942) remains.

I must admit I wasn’t sure how I’d respond to visiting a place where nothing of the original camp remained, but of course what is important here is the land itself, for it’s the very soil upon which the victims walked and within which they were buried which holds their memories still. The scale of the site becomes the memorial and just as its countless victims walked upon this small piece of land to their deaths, so we walk around it, looking in, so as to remember them, staring at the rocks which litter the landscape as if each stone is a single individual.

Thinking about the hundreds of thousands of stones, I’ve been reminded since coming home of an old Jewish cemetery we visited in Kazimierz Dolny which was desecrated and destroyed by the Nazis. We wondered when we visited it about the practice of putting stones on graves and I have discovered that when the tradition started grave monuments were mounds of stones; visitors added stones to the mound to show we are never finished building the monument to the deceased. Another explanation was that it shows those visiting that others have come before to remember. The monument at Belzec therefore, covered as it is with hundreds of thousands of stones reminds us that this piece of land is a grave for hundreds of thousands of people who will not be forgotten; the memorial will never be finished. The fact that the stones look like the remnants of a demolished building is also significant.

Walking is itself a vital part of the memorial (it will never be finished as it is incomplete without people there to walk around), just as it has been important to me in my work on Belzec prior to my visit. I’m wondering now if stones will also become a feature?

One of the most haunting parts of the memorial was the walk through the tunnel, a cutting made into the hill exposing the soil on both sides. 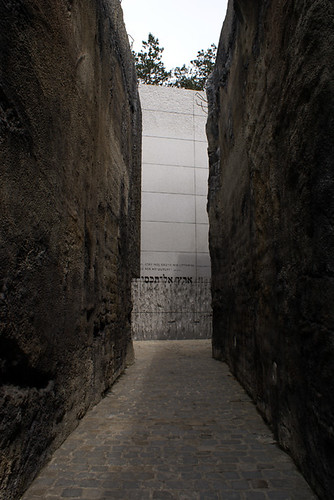 This brought to mind two things: one, the ‘tunnel’ through which the victims walked to the gas chambers, and secondly, the fact that we could see inside the ground, into the very place in which the victims had been buried.

From here we made our way to Zamosc and having spent a lovely night there, made our way to Kazimierz Dolny via the beautiful Kozlowka Palace, Zwierzyniec and the spa town of Nalenczow. Looking at the towns we passed through (including Zamosc which we left), one couldn’t help remember those very names as being places from which Jews had been deported to Belzec; the day before was never far from our thoughts.

Kazimierz was indeed a beautiful little town which had suffered much under the Nazi terror; half its population had been deported to camps such as Belzec. The weather was hot and having rested for the night, we spent the next day walking around the town, visiting King Kazimierz’s castle and walking through the forests by which it was surrounded. The landscape was indeed beautiful.
It was near the end of the day that we came upon the old Jewish cemetery, destroyed by the Nazis. After the war, a memorial was built using the old gravestones which again served to remind us of a recent and tragic past. 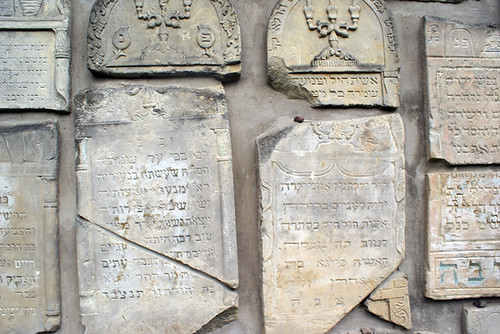