Whilst reading the Warsaw Diary of Adam Czerniakow (edited by Raul Hilberg, Stanislaw Staron and Josef Kermisz) I came across the following two entries:

“December 26, 1939- Wawrzecki’s death, no sleep all night. Disturbing thoughts about the new gzajrach in January (emigration) and about the complaints of ill treatment which I have no power to remedy. At night I read a lot, constantly envying all the heroes of my novels because they lived in different times. I am about ready to go to the Community offices. Walking down the staircase I notice on the doors of the second-floor apartments that visiting cards, naturally ‘Aryan,’ now serve as amulets. A special charge for delivering coal [to wearers of] the armbands. Deianira’s coat. Jugs of cherry brandy. A. Rotwand, Wasong (Christians of Jewish descent). It is reported to me in the evening that one of the workers from the Labor Battalion has been arrested (a section leader?). Later Mrs. Rotstadt about her husband. I will be going to the Gestapo in this matter tomorrow morning. Pawel was robbed.”

“January 19, 1940- The community in the morning. Families of the arrested. A meeting of the Council. I issued instructions. During the night I read a novel, ‘The Pilgrims of the Forest’ – Grey Owl – Szara Sowa. The forest, little wild animals – a vertiable Eden. Lichenbaum is told: ‘Sie wollen unsere Sachen nicht kaput machen‘.”

What I found so interesting and indeed poignant about these two entries was how Czerniakow had become envious of the fiction he was reading, how the escape afforded by a book (which is of course there for all who read) was almost too much to bear in light of the dreadful reality in which he lived. He wanted to escape, but the text of the book kept him out; I’m thinking here of the work I did on ‘The Gate – The Ordinary Language of Freedom‘, in which the text of history keeps us from seeing the reality of that which it describes. To paraphrase Elie Wiesel’s words (himself a Holocaust survivor) we can move ‘closer to the gate but not inside, because we can’t go inside, but that’s close enough.’ I can’t help see Czerniakow at such a gate, beyond which is the veritable Eden he found in ‘Pilgrims of the Forest.’ He too could move closer, but not inside.

This appalling reality which Czerniakow and the Jews faced at the time is well known – or at least, well documented, but what the diary reveals is how the Nazi machine ground down its victims over a long period of time; heaping upon them punitive laws and levels of bureaucracy which would have broken anyone. The fact that Czerniakow continued for as long as he did says a lot about the man he was. It also calls to mind thoughts I had on the Holocaust a while back in relation to a document discussed in Claude Lanzmann’s film Shoah (a document discussed by the editor of this book Raul Hilberg). You can read about Fahrplananordnung 587 here.

Returning to the book which Czerniakow was reading in January 1940 (which is actually titled Pilgrims of the Wild), I found a 1935 edition which I recently bought. 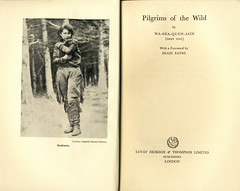 I’m not sure what I’ll do with the work, but to read the same words (I’m not sure whether he read the English or whether there was a Polish edition) about the freedom denied him and all those in the community, would I think be interesting and another way in to a very difficult subject.