I have finally got myself into gear as regards moving into my studio at Magdalen Road and have now started to get some work done. I started with putting some pictures up on the wall (those I made after my visit to Auschwitz-Birkenau) and was struck by how different they appeared when shown all together. When I first showed them they were on two walls and all in a row, but having them all on one wall lent them a whole different – and more sinister – aspect. 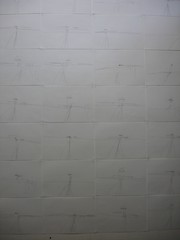 They’ve always been rather intimidating images, but now there was something relentless and almost obsessive about them; as a group they seemed to talk more; but this was not a dialogue between the pictures and the viewer (me in this case, but I believe it would have the same effect with anyone else) it was now more like an internal monologue – the externalisation of a guilty conscience. I thought about wallpapering them to the walls which would I think strengthen their obsessive quality.
I also drew more of the ‘collective views’ which are interesting. They too have the same relentless, clawing quality, but do not have quite the same connotations of guilt which one gets from repeated and near identical images. 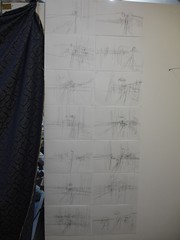 As I drew these images, I ‘found my way’ back inside the camp, seeing it clearly in my mind as I drew with my eyes closed. I followed the various lines, in particular the railways tracks, the wire fences and the telegraph wires. And as my pen marked them on the page, I began to think about their functions. The train tracks were a means to the outside world, they were defined by their end points – outside, beyond the camp – connected to the great European cities and the home towns of many who died there. The telegraph wires were likewise a means of communicating with the outside world, which for those in the camp was an impossible dream – something quite unreal. All I could think as I drew, was the ‘image’ of screams being carried down the wires. Sadly the outside world wasn’t listening. 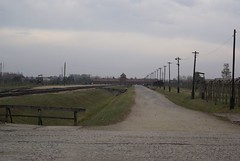 Having worked on the drawings for a while, I then began to work on an idea I sketched out a while ago.

I started working on the knot using the balls of string which I dyed last week and as I began to build up the knot I found that the dye hadn’t taken properly which nevertheless produced and interesting effect as the knot grew. 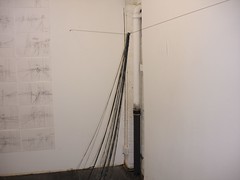 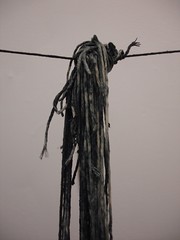 Any work associated with the Holocaust and which is realised with fabric has certain connotations, but what interested me particularly was what I’d thought about whilst drawing earlier – in particular the telegraph wires. The cut strings trailing on the floor – which represent the cut threads of life – became telegraph wires in my mind. 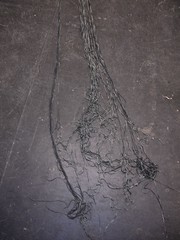 Could I perhaps use wires instead of string?