In March 2008, Brookes will be showing a select number of works at MAO (Modern Art Oxford) and so I have decided to submit two proposals, one of which is entitled ‘Dreamcatcher’. The following extracts are taken from that proposal, the first section being ‘about me’ and the second ‘about the work’.

“As an artist, my main areas of interest are time, memory and remembering, with a particular emphasis on postmemory and its formation within the individual consciousness. Examining past events such as World War 1 and the Holocaust, my work seeks to explore how we formulate memories of times when we were not born, or of events to which we were not witness. What strategies do we employ in reconstructing the past? Contemporaneous objects, documents, photographs, verbal and written testimonies/narratives can all be used by the imagination to create postmemories, but what role do they play in the present-day, real-time, world?”

“An installation comprising a single room, all four walls of which are wallpapered with hundreds of drawings (see attached images for completed examples). These are drawings of the gate-tower at Auschwitz-Birkenau as remembered by myself following my visit there in October 2006. In the centre of the room, a net is suspended from the ceiling, created from hundreds of pieces of black string knotted together; a physical version of all the drawings, as if they were shown on a single piece of paper, and as if the ink had been turned into string.

The drawings themselves could be said to represent a last, snatched glance at the gate-tower of Birkenau and their number a testament to the number of people who died there. It could also be said to reveal my own incomprehension of standing in a place where over a million people died (a conflict between memory and postmemory), each death a piece of string – the thread of life drawn, measured and cut, as according to Greek Mythology – and tied to make the Dreamcatcher. Dreamcatchers are said to let good dreams through and ensnare nightmares, and for all the victims, Auschwitz-Birkenau was exactly that – a catastrophic nightmare.”

Today I started to create a prototype net at my studio and like all these things, it proved quite different in the way it began to develop off the page. Firstly, I tied a piece of string across my space about 7 feet off the ground and then attached vertical pieces which extended down to the floor. Almost straight away, I found myself thinking of a gallows. 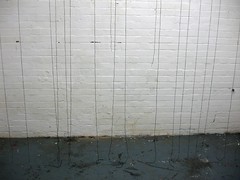 When it came to tying the horizontal strings, I used the pile of cut strings which proved rather difficult to use, but I used them nevertheless, and the action of tying, again proved interesting albeit for very different reasons than before. Each knot felt just like an act of remembrance. It was a positive act rather than a negative one.

Having completed a number of the horizontal strings, a colleague in the studio told me that she thought it looked like a musical score of some kind. I was thinking that it looked like writing; but this idea of it being musical was interesting. 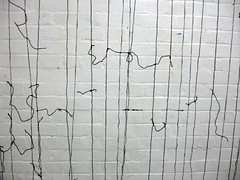 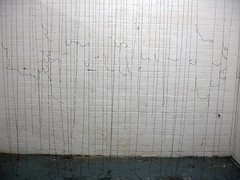