Today I began to install the Dreamcatcher work at MAO which after a while trying to package up the ‘net’ I finally managed to do. Right away I was taken aback by the difference between the work as it appeared in my studio and the work as it appears in the gallery; there is something rather staid about it which might be to do with the lighting (which we will work on tomorrow) and the power-socket in the corner. It just seems at present to be a decorative hanging. 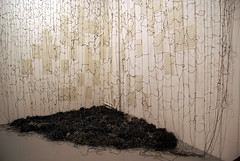 The other problem for me is the backdrop which still looks a bit contrived; the sheets of music are I think essential but the way they are presented isn’t quite working. It might be down to the fact there isn’t enough paper so I bought some more today and will add that tomorrow morning. 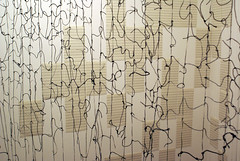 The detail below shows for me the importance of the manuscript paper as one sees the net superimposed upon it as if it is music written on the page. I guess it’s just a case of trial and error at the moment, but in the case of this show I might removed the paper altogether.

Another option might be to go back to the original idea and add the drawn images of Auschwitz?