This afternoon I worked on a possible ‘backdrop’ for the Dreamcatcher installation which will itself be installed at MAO on wednesday. As it stands (without the backdrop), it works, but I want to make a connection between the string and text, music, drawing etc. and the idea of the pile of string being a pile of unwritten words, unwritten music and so on. One idea I’ve had is to place pieces of blank paper, postcards, manuscript paper and writing paper on the back wall, and all the while I’ve thought about it, the more the image of the ‘rescued’ Jewish gravestones made into a memorial war in Kazimierz-Dolny (Poland) appeared in my mind.

So with my various pieces of paper, I went to the studio and made an attempt at creating something. The results are as below: 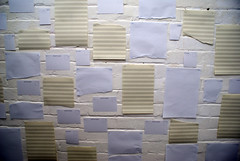 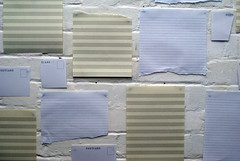 Looking at the above, one can see a connection with the image below – the wall in Kazimierz-Dolny. 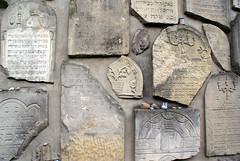 Below, is the backdrop as seen behind the net and the string. 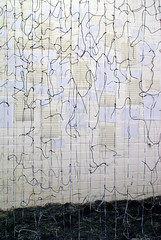 So, I think this idea works very well, my only problem is the quality of the fragments. As the above was made this afternoon, just to see how it would look, I’m a little unsure of how it should be displayed come Thursday when it’s installed in MAO. I think the paper is important but I’m not sure blu-tacking is good enough. Also the paper looks too clean and the postcards I think should go (maybe just one or two pieces). The main thing is not to let it look too contrived; the string and the net work well, at the moment the paper fragments jar just a little – something to work on tomorrow and Monday.