Thinking about the backdrop for the Dreamcatcher I have decided that it would be best to stick with just empty sheets of manuscript paper rather than bits of everything else. The trouble is I haven’t collected enough different types of paper and having just three things (manuscript paper, postcards and lined paper) makes it as a whole look a bit ‘cobbled together’ and rather contrived. Having just the manuscript paper however helps me to avoid this. Furthermore it makes for a stronger piece. With just the empty manuscript paper as a backdrop, the cut string would become just the unwritten notes, unsung music; and they would I believe be more pertinent to the theme of lost voices, silenced voices. There is something more human about these pieces of string being unplayed or unsung music.
One particularly interesting contrast is the idea of music (sung music in particular) filling a space. One can imagine the sound waves with the potential of filling a vast area and then the pile of unsung notes (unheard voices) piled in just a corner. There is the difference too in the quality of the two; the sound being light and the string being dense and heavy.

I am reminded here of something I read in Bill Viola’s collection of writing: ‘Reasons for Knocking at an Empty House. Writings 1973-1994’.

“Chartres and other edifices like it have been described as ‘music frozen in stone’. References to sound and acoustics here are twofold. Not only are there the actual sonic characteristics of the cavernous interior, but the form and structure of the building itself reflects the principles of sacred harmony – a sort of ‘acoustics within acoustics’. When one enters a Gothic sanctuary, it is immediately noticeable that sound commands the space. This is not just a simple echo effect at work, but rather all sounds, no matter how near, far or loud appear to be originating at the same place. They seem to be detracted from the immediate scene, floating somewhere where the point of view has become the entire space.”

I’m particularly interested in the idea of the net being a score of sorts, one that can be sung or played (I like the idea of the cello being used in this context, as this instrument, a mournful one in many ways, has often been described as being the closest sounding instrument (in terms of its timbre) to the human voice. If one was using the net as a score, what would one be playing? The lines of the string, the intersections (knots) or the spaces between? 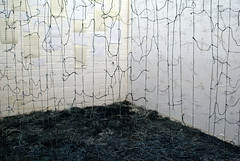 In many ways, this takes me back to a research project I started, but on which I never worked that much called Pathways Project. And already a title has come to mind. Dead Light: Unsung.