In my latest session of work on the Dreamcatcher installation, I have started to add to those drawings already wallpapered to the wall. The drawings as they stand work well, but with the string aspect of the installation they need to become more like a single mass of lines rather than a collection of individual works. Therefore, I have started to draw directly on the walls, drawing large and small versions of the image. This for me leant itself neatly to the notion of an obsessive mind working on the question of how such a thing could have happened. Also, the constant drawing on a large scale (scale in terms of the physical space of the images rather than a single image itself) called to mind a mathematician working out a puzzle – trying to find an answer. There was also the action of the drawing itself; for the first time I found myself drawing with my eyes open, and yet, despite this the image of the gatetower produced was identical with that made when my eyes were closed; it seems there is no answer to be had, just an endless puzzle to be worked on.

There is also the sense as I am drawing of becoming trapped by the lines, of becoming imprisoned or ensnared by them; the more lines I make the less the chance of escape – the less chance of an answer.
The net of course which will hang in the centre of the piece is the ‘dreamcatcher’, something which lets the good dreams through and ensnares the nightmares and therefore there is this correlation between the two aspects of the piece. 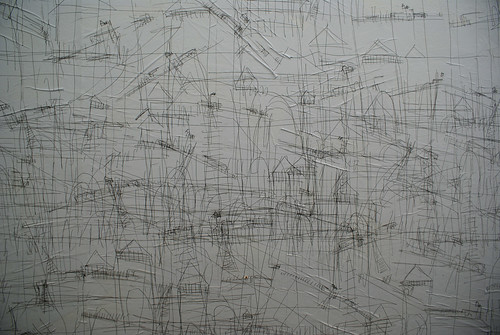 I can easily imagine a piece of work in which this idea is explored – a performance piece in which standing before a large blackboard I make a series of chalk drawings as if I am trying to find an answer.
This I will explore in the coming weeks.

As things stand now, I need to start working on the string element of the piece. I have already worked on a ‘net-like’ piece using pieces of cut string (denoting both the lives of many individuals and an individual’s memories) and took a few pictures of the drawing through this net, just to start giving me a sense of the overall work. 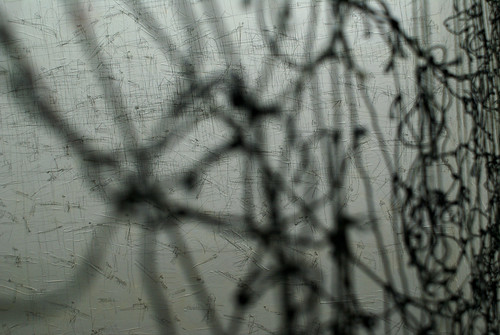 Having discussed the idea above, I couldn’t help but invert one of the photographs to see how a blackboard version might appear. The outcome reminded me of an animation I made from the first drawings I ever did in this series which can be found by clicking here.