Having thought about the ideas raised after my visit to St. John’s College, I decided to try the idea out in my studio space at Brookes. I began by copying the entry on St. John’s College from the Encyclopaedia of Oxford which, using a water-based marker I then wrote out (in part) onto one of the windows. The windows are not the right shape for the project but I got a good idea of how it would look nevertheless. 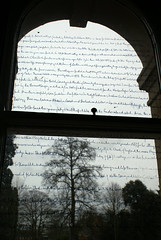 Having used the text of the history of St. John’s I decided to write on another window, all that I could see as I looked through the glass, and, having done this, I considered the significance of the two.
The text delineates the surface of the glass and so defines it more readily as a barrier; the text itself is not a physical barrier but rather a conscious one. One is able to shift one’s focus from one to the other but can never see them at the same time – at least not clearly. With regards the text describing the scene beyond the window I found that this created an interesting, temporal exchange. Looking through the text one can see the world as it is ‘now’, whereas when reading the text one can only see the world (albeit in words) as it was. You have to read/view one or the other – you can’t do both.

Reading the text traps the viewer for a moment in the past and obscures the reality of the world. It follows therefore that seeing the world as it is outside hides the past. Reading the text describing the scene outside as the text was written, one can flit between past and present but can see by doing so how some things remain the same. A building for example described in the text might well be the same as when viewed through the glass, whereas someone who was walking beyond the glass when the text was written will exist in words but will not be visible to the viewer when looking (reading) between lines. Of course it might be that words used to describe a person in a somewhat vague fashion in the text may be applicable to someone beyond the glass when the viewer’s focus is shifted; for me, this is a good way to represent the continuity of life and also acts as a warning that the past can always repeat itself. 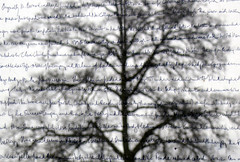 How does this work resolve with the issue of Dark Tourism? Let’s assume we are in Auschwitz-Birkenau. As tourists we are exposed to a place of trauma; we constantly flit between the past (that of which we’ve read in testimonies or seen in films and photographs) and the present (the reality of the world around us). Often we cannot make a connection between the two. We may well have read about one million dead but standing where we stand in the present, we simply cannot imagine it. However, when we do see something that fits the ‘text’ and the world around us, when we find a correlation (such as the gate tower), the past with all its trauma is brought into the present and vice-versa; there is in effect an exchange. But of course we are always safe behind the barrier; the barbed-wire-text fence doesn’t keep us in, but keeps the past at bay.

So why do we visit places of trauma? Perhaps it’s because we can always leave, we can move between past and present, yet know that we can always go home. Perhaps that’s why we go to places such as Auschwitz; because we know we can leave – leave with our existence all the brighter because of it, framed by the shadow of the past.

In the end, words (whether describing the experience of a tourist or a victim) can only take us so far. As Elie Wiesel wrote: ‘I would bring the viewer closer to the gate but not inside, because he can’t go inside, but that’s close enough.’ We can walk up to the ‘barbed-wire’ (text) fence, we can see the wires (read the text) and see through them, but we can never go any closer – not would we want to; that is, as Wiesel says, ‘close enough.’