Returning to Otto Dov Kulka’s book ‘Landscape of the Metropolis of Death,’ I want to look at another passage which I’ve copied out below:

“… many works of cinema, theatre and art, offer a way to understand and experience Auschwitz, its universe, the ghettos, that final stage, that reality. And everyone reads these books — they sell thousands of copies — so they obviously speak in a uniform language to all those myriad readers. Yet I cannot find in them what they seek to convey! It’s a completely different world! The only response I feel able to express is alienation; all that is authentic is the authenticity of the alienation.”

The ‘authenticity of the alienation’- an interesting phrase. As an artist working with subjects like the Holocaust, one has to place that sense of alienation – one’s removal from the fact – at the forefront of any work. It is the lens through which the work is seen, becoming, in my case, the work itself; i.e. how, given that sense of alienation, we can empathise with those who suffered. Kulka continues:

“Therefore I ask: in what am I different? Something is wrong with me! And then, as so often, as almost always during periods of distress, I escape to Kafka, either his diaries or his other works. At that time, I again opened at the ending – I always open randomly – I opened at the ending of the wonderful story of the man standing before the Gate of the Law. This man who stands before the Gate of the Law actually asks the same question -and it is one of the last questions he asks, driven by his insatiable curiosity, as the gatekeeper jests. He asks: ‘Tell me, after all this is the Gate of the Law, and the Gate of the Law is open to everyone.’ To which the gatekeeper says: ‘Yes, that is so.’ Then the man says (if I remember the text correctly): ‘Yet in all the years I have been sitting here no one has entered the gate.’ And the gate-keeper nods his head and says: ‘Indeed.’ The man asks him to explain this puzzling fact, and the gatekeeper does him this one last mercy and says: ‘This gate is open only for you, it exists only for you, and now I am going to close it.’

Accordingly, everything I have recorded here – all these landscapes, this whole private mythology, this Metropolis, Auschwitz  – this Auschwitz that was recorded here, which speaks here from my words, is the only entrance and exit — an exit, perhaps, or a closing — the only one that exists for me alone. I take this to mean that I cannot enter by any other way, by any other gate to that place. Will others be able to enter through the gate that I opened here, that remains open for me? It is possible that they will, because this gate that Kafka opened, which was intended for only one person, for K., Josef K., is actually open to almost everyone. But for him there was only one gate into his private mythology.”

On reading this, I was reminded of a text by Holocaust survivor, Elie Wiesel which I used in relation to a piece of work I made in 2009. 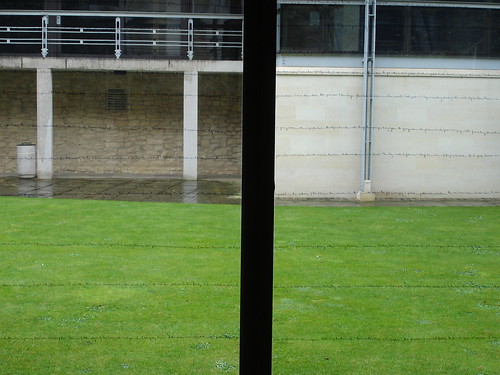 “I would bring the viewer closer to the gate but not inside, because he can’t go inside, but that’s close enough.”

There is no way into Kulka’s Auschwitz – his own private mythology. But there is a way into Auschwitz.

To try and empathise with those who suffered in, for example, Auschwitz, we should perhaps consider the camp as being like the Gate of the Law in the parable above; something that was, or rather is, open to everyone. Furthermore, we should think of the famous gates (the Arbeit Macht Frei gate or the gate tower at Birkenau) again like the Gate of the Law, as being gates made for specific individuals, through which only they can enter; serving to illustrate that this was a human tragedy – an individual tragedy repeated (in the case of Auschwitz) well over a million times. 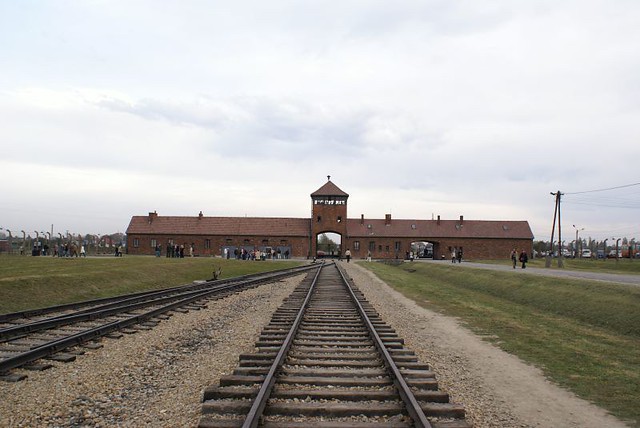 I remember clearly how strange it felt to be standing on the infamous ramp at Birkenau having walked in beneath the gate tower; how was it I could stand freely in that place where so many had perished? I think of it like this; the gate through which I walked was open only for me, it existed only for me at that particular time. To borrow from Kulka: I could not enter by any other way, by any other gate to that place. For over a million people, their only way in – their gate – led to a death camp. For me, the gate led to a memorial.