Since carrying out the observation of the Roman Coin discovered during a dig on 11th June I’ve been thinking about the coin in greater detail. One of the things which interests me about it are the vivid colours formed during its time in the ground; in particular those on the reverse side of the head, as can be seen in the image below: 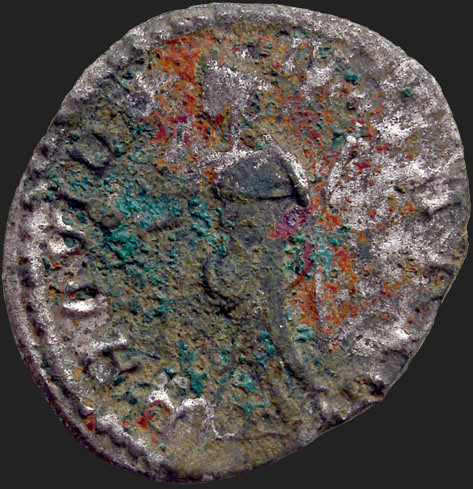 It’s easy to think of the coin as having occupied two distinct periods (i.e. the 3rd century and today) and that it’s almost two distinct entities; the ‘new’ coin of some 1700 years ago, and the clipped and rather decayed coin it is now.  But of course this coin is a singular entity which has occupied a span of time covering a range of years difficult for us to imagine. To borrow from Bill Viola, this coin has ‘lived’ this same continuous moment ever since it was ‘conceived’ – or in this case minted – and for much of its existence, it’s been laying out of sight, in silence, underground.

At some point 1700 years ago,  the coin (we might assume) was lost and during the dig a week or so ago it was found. I find it easier however, to conceive of the coin’s entire existence if I forget these two ‘divisions’ and think instead of the coin as always existing – not lost or found, just always there – somewhere. Stating that it was first lost and then found creates a kind of void in between, in which the coin just sits – not really existing at all. Of course the coin was in existence for hundreds of years; before the city of Oxford was even established, and throughout the time during which it was made ancient. And in that time, beneath the ground, things were acting upon it, slowly changing its shape and colour; to make the beautiful colours we see today. The colours therefore can be linked to the passing of time – to the coin’s continuous existence. There’s a correlation between the passing of time and the formation of the various colours.

There is also something rather poetic about this as regards the way we imagine the past. For me, the distant past is often a dark and silent place (in the sense that it’s largely unknowable – not that it really was dark and silent) but one in which there was movement and colour – just as with the coin beneath the ground. Although out of sight to us today, we know that that things moved, that things were formed, that entities acted upon or influenced other entities. That there was of course colour.

Thinking about the coin a little more, I realised how else it’s changed from the 3rd century AD. Back then it wouldn’t have been valued as an object in its own right per se, but rather in regards to what it represented, i.e. a monetary unit. If I have a pound coin in my hand, I don’t value the object (the coin) so much as what it represents (a pound sterling). Now of course, the Roman coin’s original monetary value has been lost and it’s the coin as an object which has become important.