I’ve always found it amazing, when, on a programme like Time Team, an apparently empty field is shown to have once been the site of some vast Roman villa; how something so grand and seemingly permanent can one day be lost to both memory and the landscape; a memento mori of inscribed lines on quite an epic scale. The recent discovery of the tomb of Richard III is perhaps the most vivid illustration of this; how the grave of so eminent a man could be buried (albeit hastily) in the choir of a friary, only for all trace (of both the grave and the friary) to be lost beneath the tarmac of a nondescript car park. In Urne Burial (1658), Sir Thomas Browne wrote:

“There is no antidote against the Opium of time, which temporally considereth all things; Our Fathers finde their graves in our short memories, and sadly tell us how we may be buried in our Survivors. Grave-stones tell truth scarce fourty years; Generations passe while some trees stand, and old Families last not three Oaks.” In the garden of the house in which I grew up, there was an oak tree – now lost; a victim of the relentless drive to build flats and houses on every scrap of space ‘available’.

In the shade of that tree (visible above on the right hand side) and the lawn beyond its reach, I spent many childhood days, playing football, high-jumping (badly), playing at being ‘The Professionals’ and, on one occasion, holding a sale to raise money for charity. But in the last year, a few years since my dad sold up and left, half the house has been pulled down (including most of my bedroom) and a new one built alongside, covering most of the garden.

The lawn on which we had picnics, over which the rabbit – Patch – thundered, chasing Sammy the cat – and the beds beneath which those same animals, amongst many others, were interred, is now itself buried beneath new concrete floors and builder’s rubble.

It’s strange to think of someone standing in a kitchen, or sitting in a living room, on the exact same space where we once played.

And that’s what made me think of those Roman villas lost to the past beneath the ground; all those memories attached to those buildings which have soaked away like water, into the ground over the course of two millennia.

The garage is now a particularly mournful sight. Here, I spent many hours (often with enormous hair as evidenced by the photograph) on the drive, playing football with my brother and friends – or sometimes by myself (I can still hear the sound of the plastic ball skitting across the concrete and the bash of the blue metal door which was sometimes the goal). The sounds too at night of my dad arriving home in the car, the radio blaring as the wooden gates were opened; the whoosh of the garage door being lifted, are memories more permanent than the concrete drive itself. Now the garage is a sorry looking creature, whose full demise is certain, along with the shed tucked away behind (in which we sometimes slept on warm summer nights).

The photo below of me and my cousins (on my dad’s side) was taken when I was a baby in the summer of 1971. 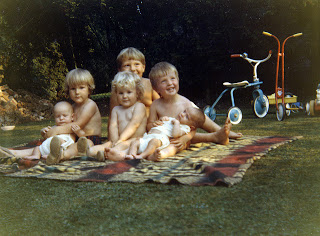 The patch of grass on which we’re sitting would soon become the garage….