For many years I’ve had a song in my head, the lyrics for which I’ve always remembered as being:

The wicked magician flies through the night
With long wings to take him far out of sight
When you are safe in bed, he’s flying overhead
Wicked magician, fly!

I was< I thought, about 7 or 8 when, as a class, we all sang along to the recording. I would have been at New Marston First School and can recall the classroom we were in, and, for some reason, the view outside the window.

Years later, with the song still in my head, I decided to try and find out what it was and it didn’t take long to discover that the song was part of a broadcast for schools on BBC Radio; a series called ‘Time and Tune’ with this particular cantata entitled ‘Alvida and the Magician’s Cape’.

“This cantata [by composer Michael Plaskett] , based on a Swedish folk tale, was the winning work in a national competition held by Time and Tune in 1977, calling for composers and authors to write an original work for children. Two concerts based on Alvida and the Magician’s Cape were given at Fairfield Halls in Croydon on Friday 10th March 1978.” 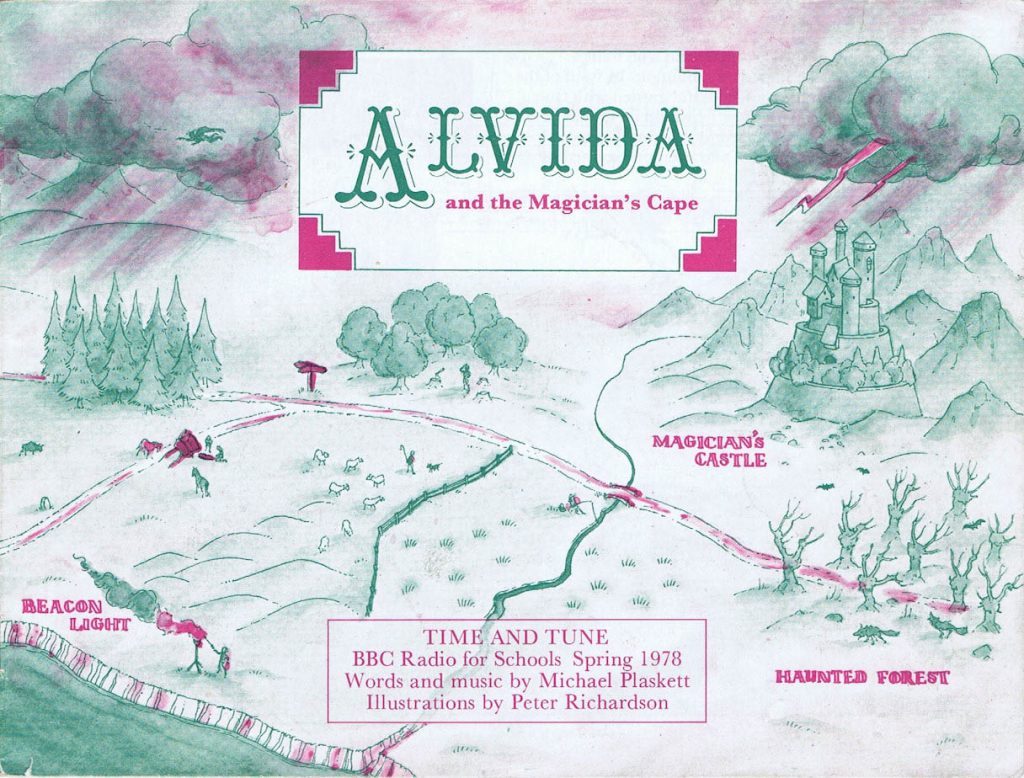 The series leading up tho this performance was broadcast on the BBC between January and March 1978 which would have made me 6 years old when I heard it. The fact I was so young and have remembered this song so vividly, illustrates how much of an impact the tune and the words had on me. Considering it was about a flying magician who captured children, that might hardly be surprising.

Despite looking, I couldn’t find a recording of the song (it has, apparently, been deleted) but recently on eBay I managed to find a copy.

The programme itself comprises a narrator who leads the children listening through each of the songs (explaining how they might play along and so on) as well as a final performance at Fairfield Halls in Croydon. The extract below is a very poor recording of the song I remembered, taken from that performance.

Despite the quality of the recording, hearing it again after 45 years was incredible. Not only was the tune exactly as I’d remembered, but I could recall other parts around the song; the narrator’s intro for example, where he says menacingly:

“Whenever the magician needed another boy or girl, he would put on his finest clothes, dab his lips with honey to make sweet words come from his mouth and sprinkle magic dew in his eyes to make them sparkle with kindness. Then he would take out his special black cape, which he would change into gigantic wings and fly off to find another victim.“