This afternoon I visited the library and found a map of Radley and its surrounds dating from 1811; 17 years before Stephen Hedges stole the lead from Radley Hall. On the map, Radley Hall (or House) is shown, along with a road – or drive – leading up, which, I think, corresponds to the satellite view I posted previously. 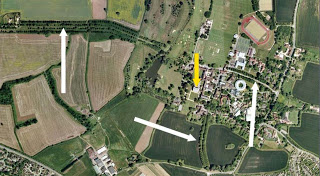 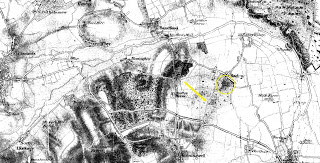 This map is aligned a little differently, but Radley Hall is circled in yellow and the drive indicated by the yellow arrow corresponds to that shown by the white arrow on the left hand side in the picture above. I’m not sure if the Lodge was located here, but the drive extends from the Oxford Road and would (I assume) have been the route taken by Richard Burgess on his way from Abingdon to Oxford. A little more research will be needed.

Having stolen the lead, I again assume that they would have travelled into the city via the Oxford Road through Bagley Wood, down Hinksey Hill and up the Abingdon Road. Once in the city, they made their way to the castle precincts and turned back up Butcher Row (modern day Queen Street) as indicated by the newspaper report. Of course I cannot be sure that this is how they travelled, but it seems much more likely compared with what I’d thought earlier.