“What, then, is this material world? Of what does it consist?”

So asks Tim Ingold, in his book, Being Alive, Essays on Movement, Knowledge and Description. It seems an obvious question, or rather, a question for which there is an obvious answer, but in terms of the field Material Culture it would seem to be not so straightforward. Citing a number of works on the subject, Ingold writes how “their engagements, for the most part, are not with the tangible stuff of craftsmen and manufacturers but with the abstract ruminations of philosophers and theorists.” Furthermore, “literature in anthropology and archaeology that deals explicitly with the subjects of materiality and material culture seems to have hardly anything to say about materials.” Ingold then goes on to cite an inventory of materials one might expect to see when dealing with this subject, as can be found in a book by Henry Hodges called Artefacts.

In an array of books on his bookshelf, all dealing in some form with the subject of material culture, Ingold states that one looks in vain for any “comprehensible explanation of what ‘materiality’ actually means, or for any account of materials and their properties.”

To cut a long story short, Ingold goes on to question what the material world actually is – thus the question at the top: “What, then, is this material world? Of what does it consist?”

When I read this, I thought about the dig I went on last year at Bartlemas Chapel in Oxford, when I found a small but rather beautiful piece of mediaeval (I think) pottery. 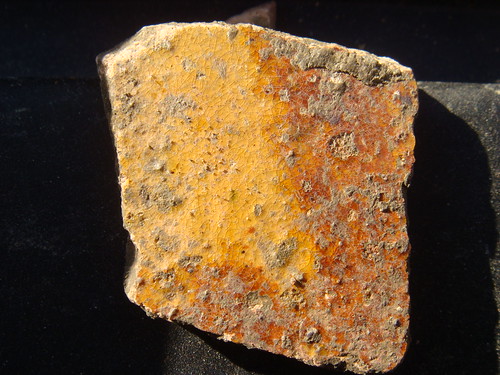 There are many ways in which one could interpret this find, but what I thought about was how this was like a missing piece of the present, and how, before it was lost to the soil, it had existed in a mediaeval present that was (save for the obvious differences) just like ours today. There was the wind, there were trees and flowers, the clouds, the sky and of course the sun, by whose light the beautiful glaze could be seen again, just as it had been by someone living hundreds of years ago. Reading what Tim Ingold has written about materiality and material culture above therefore made perfect sense.

And as regards my work with empathy and the importance in this respect of materiality and material culture, the idea of the body as part of the material world was also of interest. We are not set outside the material world but are an integral part – therefore it’s easier to engage empathetically with an individual through the objects those individuals once used. Empathy is as I’ve said before an augmented discourse between bodily experience and knowledge. Knowledge as Ingold writes derives through movement: “It is by moving that we know, and it is by moving, too, that we describe.” When I discovered the piece of pottery (through moving), I uncovered not only the object itself, but the material world by which it was once surrounded, including those people who once used it, or the person who even made it.