Yesterday I went to Weymouth to look at some deckchairs for use in a number of installations. One such installation I’ve been considering centres around the D-Day landings – I won’t go into the details of what it will entail but I was amazed as I was shown around the front to discover that Weymouth played a pivotal role in the landings themselevs, in that it was from the harbour that many of the men who took part in the invasion left. The coincidence convinced me that this was the place – the only place – where the work could be installed.

On the front is a memorial to the men who took part in the D-Day landings. 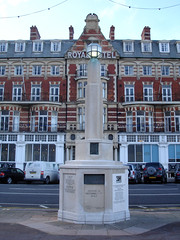 Around the base are the following inscriptions. 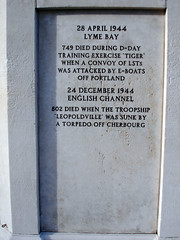 749 Died during D-Day training exercise ‘Tiger’ when a convoy of LSTs was attacked by E-Boats off Portland.
24 December 1944
English Channel

802 Died when the troopship ‘Leopoldville’ was sunk by a torpedo off Cherbourg. 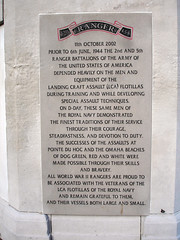 Prior to 6th June 1944 the 2nd and 5th Ranger Battalions of the Army of the United States of America depended heavily on men and equipment of the Landing Craft Assault (LCA) Flotillas during training and while developing special assault-techniques on D-Day, these same men of the Royal Navy demonstrated the finest traditions of their service through their courage, steadfastness, and devotion to duty. The successes of their assaults at Pointe du Hoc and the Omaha beaches of Dog Green, Red and White were made possible through their skills and bravery. All World War II Rangers are proud to be associated with the veterans of the LCA Flotillas of the Royal Navy and remain grateful to them, and their vessels both large and small. 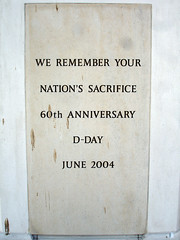 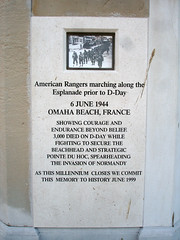 6 June 1944
Omaha Beach, France
Showing courage and endurance beyond belief 3000 died on D-Day while fighting to secure the beachhead and strategic Pointe du Hoc, spearheading the invasion of Normandy. As this  millennium closes we commit this memory to history June 1999.

Further along the beach are more war memorials. 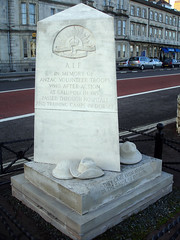 A.I.F.
In memory of Anzac Volunteer Troops who after action at Gallipoli in 1915 passed through hospitals and training camps in Dorset. 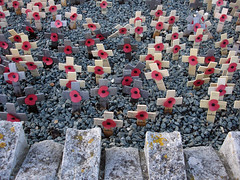 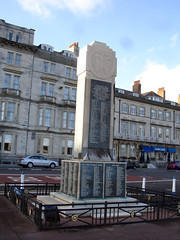 As a child, I often went with my family on holiday to the Dorset coast, either to Weymouth or the surrounding areas, and even though my experiences were – it goes without saying – utterly different to those of the men who left Weymouth for France, nevertheless, there is something about these experiences residing in the past as memories which allows me to, in some small way, access the past before I was born. The past (and in particular the distant past) is often imbued with a sense of the exotic – a word which is of course as far removed from the reality endured by the men who fought and died during D-Day as you can get. This ‘exotic’ quality is more akin to the nostalgia we often feel when contemplating our own memories. There is a sensuousness to memories which we experience without recourse to our senses. We see, hear, smell, touch and taste memories internally; we can see them with our eyes closed. Only by being in the place where they happened can we begin to experience them as things which happened in what was then the present. It’s almost as if they are grounded.

Standing in Weymouth and looking out at the cliffs, feeling the wind, hearing the gulls and the waves, I could get a greater sense not only of my own memories, but those of a time when I was not even born. The men left Weymouth and who died on the beaches of Normandy would have known the same feel of the wind, the same sound of the waves – they would have seen the very same cliffs. We can never know what it was like to be in their shoes, but by understanding and observing the present we can at least ground the memories in reality.

Looking at some recent work I’ve done with some of my old holiday snapshots, I can see in light of my visit to Weymouth how they have become more meaningful. The image below is a collage of all the parts of those holiday snaps from which the people have been removed. 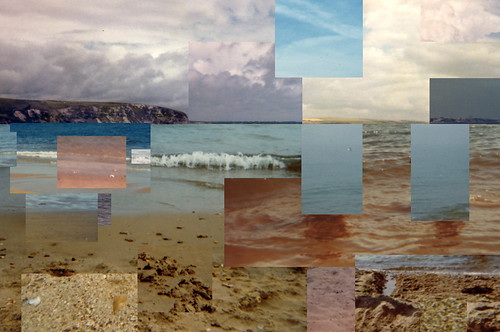