I have been reminded by Monika that I really liked an Australian piece shown elsewhere in the city. By Healy and Cordeiro, it comprised thousands of used video cassettes (195,774 according to documentation) arranged in a large block like a kind of tomb on the outside of which a number of the labels (some printed, some handwritten) were visible. 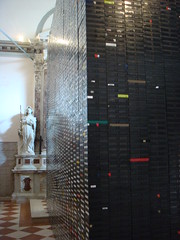 The vast block, displayed in an ecclesiastic setting became a kind of sepulchre in which the recent past was buried. The titles on the outside became like names revealing only a little of what was hidden inside, information which would take – again according to documentation – over 66 years to view. So, Australia was in this respect, excellent.