I have recently started to think more about my memories and how I should start writing them down, not because as a collection they would amount to a great memoir, but because it’s often the small snippets which come to us for no apparent reason that are amongst the most interesting. Reading the work of W.G Sebald has certainly precipitated this idea and so, here I am with a memory which came to me a few moments ago. I should point out that these memories are not stories or anecdotes; they do not have a punchline or cast new light on momentous moments of the past, but rather they are fragments which remind me of how life really was. Incidentally, I took delivery today of a copy of Walter Benjamin’s ‘The Arcade Project’, a large tome, made up of quotes, thoughts, ruminations etc. on the Parisian Arcades of the Nineteenth Century. To borrow, or rather steal, from the translators’ notes:

“Benjamin’s intention from the first, it would seem, was to grasp such diverse material under the general category of Urgeschichte signifying the ‘primal history’ of the nineteenth century. This was something that could be realized only indirectly, through ‘cunning’: it was not the great men and celebrated events of traditional historiography but rather the ‘refuse’ and ‘detritus’ of history, the half concealed, variegated traces of the daily life of ‘the collective,’ that was to be the object of study [my italics], and with the aid of methods more akin – above all, in their dependence of chance – to the methods of the nineteenth-century collector of antiquities and curiosities, or indeed to the methods of the nineteenth-century ragpicker, than to those of the modern historian. Not conceptual analysis but something like dream interpretation was the model.”

It’s often the case, that these small pieces of memory, these apparently inconsequential fragments, often build to give a much clearer, more defined image of a time, than a particular event or traditional historiography, and, as such, I will write as many that spring to mind over the coming months.

The first of these fragments concerns me riding my bike (I was going to write ‘cycling’ but ‘cycling’ wasn’t what I did when I was a boy. I ‘rode my bike’ as all boys did). I was ‘riding my bike’ up Ambleside Drive (one of the roads around where I grew up) at a time approaching an election. I’m not entirely sure as to which election it was, but given my age, I can only assume it was the General Election of 1983. Ambleside Drive itself was a very pleasant road which rose from the bottom of a hill (where was my old school) to the top – Eden Drive – where one would find a small collection of four shops, all of which have since disappeared: Kendal’s (groceries), Tucker’s (butcher), Shepherd’s (greengrocer) and the Post Office. I have many memories of this small parade which would fill several pages in themselves, but for the moment, here are just a few.

I remember buying sweets in Kendal’s (when this shop closed, the purchase of sweets was transferred to the Post Office opposite or Mallows at the bottom of the hill) and being amazed by the slicing machine with its circular blade. Here we purchased our sweets prior to going to the cinema up in Headington; they were a type of sweet I can’t quite put my finger on, although mint and lemon seems to ring a bell. The cinema was at the top of the road where my grandparents lived and it was here I saw Benji and Grizzly among many others. I remember little else about Kendal’s, apart from the slices of ham falling from the machine, the cheese slicer, the jars of sweets (a ‘quarter of pear drops’) up on the left, ‘Wavy Line’ and the path outside, which ran by the side of the shop to join the road. When the shop closed and became a house, I couldn’t quite believe I wasn’t able to walk on that path anymore, and the whole idea of a shop becoming a house seemed to go against the whole nature of things – just as it does today. In fact, there is something still quite ghostly and not a little sad about this small parade.
Mr Tucker the butcher (adjacent to Kendal’s) was a cheerful man, always in his dirty white coat, bald head, black-rimmed glasses and sporting large sideburns. I can see him now taking the pencil from behind his ears and writing the price on the paper packet, containing whatever meat Mum was cooking that week. I remember the beaded curtain to the back, the way he wrote his prices in deformed numerals, in the window display and on the board outside. And the handles of the doors – I remember them, along with the front wall, which, I believe is still there today.

Mr Shepherd, the greengrocer (opposite Tucker’s) was was a cheerful man. He too would always have a pen behind his ear and would wear a coat that was either green or grey. I seem to recall an orange biro, or even a collection of biros in his top pocket. Like Mr Tucker, his prices comprised deformed numerals, and whatever was requested, he would measure it into the bowl of his scales, which were without doubt the most formidable I have ever seen – the mass of numbers which made up the chart would however, be read in an instant – take the pen from behind his ear and write the product and price on the order pad. I can see his writing now, black biro, almost illegible, slanting to the right. In a deft manoeuvre, the bowl of the scales would be tipped up, the contents emptied into a brown paper bag, the open corners gripped and the bag swung over itself so as to close it, all done as if a conjurer on a stage.

Outside the shop was a figure of eight path which ran around two patches of grass. We would ride around these on our bikes or tricycles whilst Mum carried on with the shop inside. I vaguely remember Mr Shepherd’s brother. He too worked in the shop until one day he disappeared. I later learnt he’d hanged himself.

The Post Office was pretty much that, and was the last of the four shops to close.

Returning to the election, I must admit that I cannot remember much about it. Of course now I know the result (Conservative landslide) and its place in history, but in terms of my contemporary thoughts there are none – all except for the fact that even at that young age (I would have just turned 12) I couldn’t understand why anyone would be voting Conservative. Conservative? Quite where my disdain originated I don’t really know; one assumes it was at home, but my parents were never what I would call political. All I can remember is looking in bewilderment at the small blue posters in the windows of a few houses up the road. The posters were particularly neat and quite unlike the posters one sees displayed in windows these days; certainly, the current vogue of nailing one’s colours to huge boards in the front garden (as if one were selling the house) didn’t, as far as I recall, exist back then. No luminous-green posters with the red font of Labour (back then the liveries were simple; blue or red) , and certainly not the bright orange diamonds of the LibDems (who were then the SDP Liberal Alliance). In fact, there is something about Liberal Democrat posters which belie their power in parliament; perhaps the smaller a party’s tally of seats, the louder they have to ‘shout’ in the hustings. At the last election, some LibDem posters I saw were large to the point of obscene. Back then however, the conservative posters (which were actually more like postcards) were well mannered – much like those who looked out from behind the windows in which they were displayed. They didn’t shout but rather stated their allegiance as if introducing themselves at a wake.

And so I cycled on. Perhaps to post a letter or to just to go to the shops. 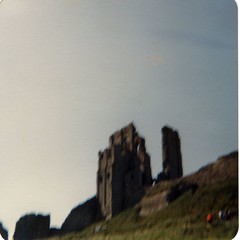