Last week saw my first attempts at printmaking (etching) the results of which can be seen below. 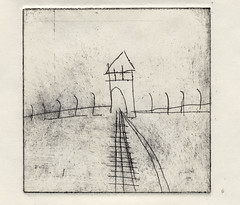 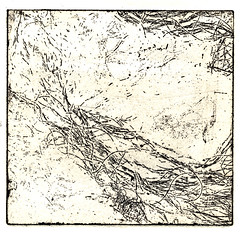 The two techniques we used were hard and soft ground etching, both of which yielded surprising results, which, in part, is the beauty of printmaking, where the eventual result is never certain. Of course this might just be down to inexperience; I’m sure that professional printmakers achieve results which are wholly intended.

For the first print, I decided to etch a version of the drawings I made of Auschwitz-Birkenau, not so as to aestheticise the image, but to explore what could be gained from this particular medium. Would it bring anything new to my investigations? Despite the fact it looks like something one might find on a greetings card (itself an interesting point) the quality of the image interested me nonetheless – in particular the lines of the track and the fence where the ink had been left on the plate. The manipulation of the ink I realised could make all the difference – an obvious point perhaps, but then I had assumed that I would be creating a clean image with pure and crisp lines (something which I could certainly try in the future). But what interested me the most was the plate itself, the plate as an object in its own right, and, it’s in this that I see potential for investigation re my work on Auschwitz-Birkenau.

As an experiment, we buried some of our plates (these will be dug up this week) so as to cause them to rust. I’d already begun to think of the plate and the print as metaphors for action and the remembered action, and the idea of something rusting or decaying synonymous with the past, where original, unrepeatable moments decay and the memories of those events are merely obfuscated reproductions; the original moment is only ever partially revealed.

The actual scratching at the plate in order to secure an image also interested me. There is something – violent is too strong a word – ‘particular’ about its physicality which, if the plate is the ‘lived action’, declares a degree of tribulation a regards its making, and dealing, as I do in much of my work, with trauma, the etching of an image on a plate and the ‘biting’ of the image into the plate by acid serves to emphasise this.

From this etched, ‘traumatic’ image, one can make facsimiles, but these copies – these memories or post-memories – are never the same (for one they are reversed), and as the plate decays so any prints will remove themselves further from the actual event. Of course, if no prints are made from the plates – if actions are not ‘remembered’ – then more possiblities arise.